Whats up friends! It’s M4SON back with another Hog Rider Legendary Arena deck! I got requested by a lot of you on how to integrate mini P.E.K.K.A with hog rider so here is my deck that I have found quite some success with. With the huge uprising of Royal Giants in the meta Mini P.E.K.K.A has become a very popular card as the “hard counter” to the Royal Giant. In this deck mini P.E.K.K.A is considered as a support card and isn’t used to damage Arena Towers. However, when you defend correctly and gain yourself a elixir advantage you can turn the mini P.E.K.K.A into a very threatening counter push! This deck has great synergy and a lot of attack combos you can throw at your opponent to keep them guessing as well. 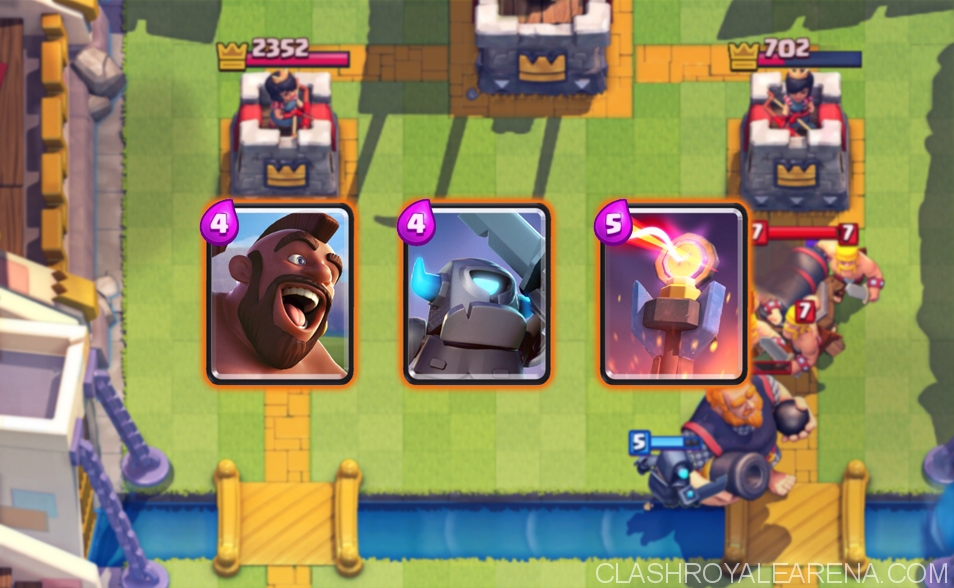 Zap: Great utility spell to clear out any cheap troops used to distract your mini P.E.K.K.A . Synergies well with the Fire Spirits to take out tougher units like Barbs, and of course leaves Minion Hordes at 1hp. Also great for allowing your hog / mini P.E.K.K.A to get one or two extra hits in on the enemies tower.

Goblins: Great cheap troop used for distracting P.E.K.K.As, Princes, etc. Use with hog or mini P.E.K.K.A for a strong attack combo. Place these guys behind either to give them a speed boost to the tower. Also a very good Royal Giant killer if they are left alone. During Double Elixir combo these guys with Fire Spirits for lots of fast damage.

Fire Spirits: One of the new cards! These little kamikaze killers are actually pretty solid for 2 Elixir. Although they jump a little slow and sometimes don’t off consistent targeting, they combo with Mini P.E.K.K.A and hog very well instantly killing themselves to take out any cheap troops or Minions. Also synergies well with Zap / Fireball to finish off any weak units. When combo’d correctly they offer insane burst damage that can catch many players off guard.

Cannon / Inferno: Both these defenses work really well it just depends on what type of play style you enjoy. Cannon allows for cheaper defenses and faster cycling and more frequent attacks. However, you must play it correctly against Royal Giant and get the timing down. Inferno is a more safer bet against Royal Giant but the 5 elixir cost + it getting easily distracted by hordes can leave you in a tricky spot.

Minions / Minion Horde: Likewise with either defenses these two cards are interchangeable as well. If you enjoy more burst damage to fend of double Princes choose Horde. If you want to go in to attack more go for Minions. Both have great uses depending on the situation. I personally enjoy minions more because they can trade with Princesses, Barbs, Valks, etc. for pretty good value. Minion Horde can be dangerous too if you can catch your opponent waste his arrows on your Goblins/Fire Spirits.

Fireball: Solid card to help against big Royal Giant pushes where troops clump together at the bridge. Also good for sending them premature with your Hog / mini P.E.K.K.As attacks. Great spell that can change the tides of a fight instantly when placed correctly.

Mini P.E.K.K.A: The slayer of Royal Giant’s. Make sure you have either your inferno or cannon distract the Royal Giant, then send mini P.E.K.K.A to rip it to shreds. Also great versus any single target unit. Mainly use her on defense and turn it into a counter push. During Double Elixir if you have extra elixir to spare send in a small attack combo with Fire Spirits. The Fire Spirits will kamakazi into typical troops that distract her ie) Skeles, Goblins, Spear Goblins, which gives her a free path to the opponent arena tower.

Hog Rider: Staple card in most Hog decks. Now with the new fire spirits can combo very nicely and offer a strong push. In very situation cases you can place the Hog behind Mini P.E.K.K.A giving it a speed boost allow both to reach the tower extremely fast. Of course combo hog with the goblins as well for another great attacking combo.

How to use this Hog Rider Deck?

Okay guy so that’s everything I want to say about this Hog Rider Mini P.E.K.K.A deck! Don’t hesitate to comment If you need any help or you want to share your opponents! Thank you so much guys! Good luck!