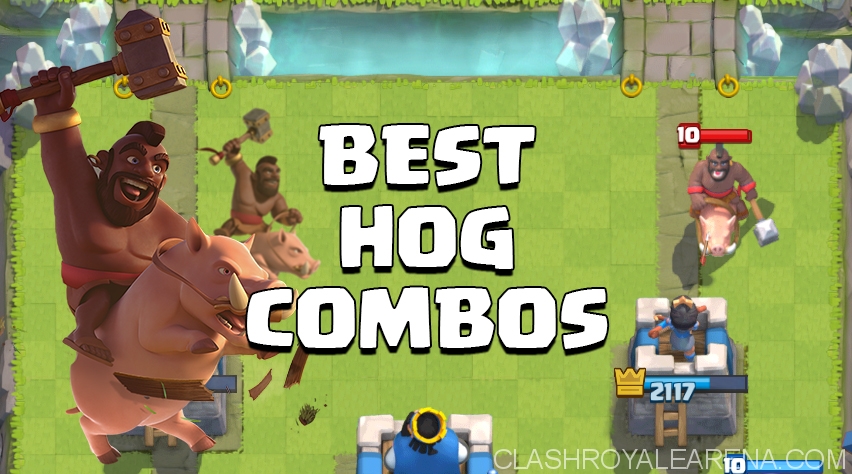 The first combo I want to share is the incredible Hog Rider with Goblins and the Freeze Spell or Zap Spell. This is a ridiculously good combo in which your Hog Rider is a bulky and fast troop, so he can actually shield for the Goblins who are equally as fast as him. Not only do the Hog Rider and Goblins make for a very fast combo, they are one of strongest combos in the game in terms of Elixir cost. It’s just a powerful combo for only 6 Elixir. For example, a level 5 Hog Rider does 155 damage per second, while the 3 level 7 Goblins together deal 240 damage per second, so together they deal a massive 395 damage per second and if you have Freeze Spell, you can deal about 2000 hit points of damage onto a tower with the Hog Rider, Goblins, and Freeze Spell for the cost of only 10 Elixir. So guys next time you send your Hog Rider in with a Freeze Spell, make sure to combine him with Goblins!

What about Zap Spell? Believe it or not, the Zap Spell is just as deadly as the Freeze Spell. Why? Because the Zap Spell only costs 2 Elixir as opposed to the Freeze Spell which is more expensive, costing 4 Elixir. And when you’re investing less into combos, you’re making smarter moves with less risk. For example, say your Hog Rider Freeze combo gets shut down by a measly 2 Elixir Goblins, as the 2 Elixir Goblins are just an excellent counter to Hog Riders. You would be down 6 Elixir, but if you had the Zap Spell, not only would the Zap Spell kill the Goblins, it will also stun the Arena Tower, giving your Hog Rider an additional shot, while not to mention you only paid 6 Elixir for the Hog Rider and Zap combo. So yea guys, don’t underestimate the Zap Spell. Add in the Goblins for 2 additional Elixir, and it will be very annoying for your opponent to deal with.

The next very powerful combo is the Hog Rider with Goblin Barrel and Zap Spell. If you guys saw my video on how my clan mate Jordanny, who’s a level 6 player, beating level 10 and level 9 players with this strategy. It is such a ridiculously powerful combo, in which you can directly go for your opponent’s tower with the Hog Rider and Goblin Barrel with heavy damage. Keep in mind that if you’re using this strategy, you must have the Minion Horde in your deck as the Minion Horde baits your opponent into using his Arrows, allowing you to safely use your Goblin Barrel.

Similar to the Hog Rider and Goblins combo, the Hog Rider and Mini Pekka combo is just as deadly. Both are fast and bulky troops that deal heavy damage. The Mini Pekka is one of the strongest cards in the game that only costs 4 Elixir. The Mini Pekka is easily distracted by hordes of low HP troops, such as Goblins or Skeletons. So adding in your Zap Spell will allow you remove those threats pretty easily and be able to deal heavy damage onto your opponent.

The last combo I want to share is using a heavy area damage spell card such as Fireball or Lightning with the Hog Rider. The Hog Rider can be easily stopped by buildings. So it becomes imperative that you have a way to dismantle and punish your opponent for placing multiple buildings together. And that’s exactly what the Fireball or Lightning Spell provides you with. Both can easily destroy those annoying building spammers who place defenses such as Inferno Tower and Cannon together.

So I hope you guys found this guide to be informative, and if you’re an avid Hog Rider user like me, then you’re going to have a lot of fun trying out all of these different combos. And remember guys, the best way to play is to start slow, make the proper plays and build up more Elixir than your opponent. And when your opponent is in an Elixir deficit, while you’re leading with Elixir, that’s when you want to make your powerful combo strikes. The best way to attack is to attack in combos, but you also must make sure that you’re not rushing it and you’re not recklessly throwing away your precious Elixir.

So hope you guys enjoyed this small Hog Rider guide, don’t forget to hit the like button, comment, and subscribe if you haven’t for more daily Clash Royale strategy and videos. Also, don’t hesitate to commend If you have any question about Hog Rider in Clash Royale guys! Thank you very much!