Hello, I’m Ic3Box and this is my very first deck posted officially. I have been playing this game for many years, and I have never spend money on it for gems, gold, etc. I have tried to keep myself clean, and see where I can get.

Playing with the Mega Knight in the Challenge and unlocking him from the Legendary Chest at 9 wins was awesome. I personally consider this card a very ‘OP’ one, if played correctly.

After unlocking it, I found myself searching for a deck online, but the ones I found weren’t the best. So I started creating my own one, until I found the best combination of cards. 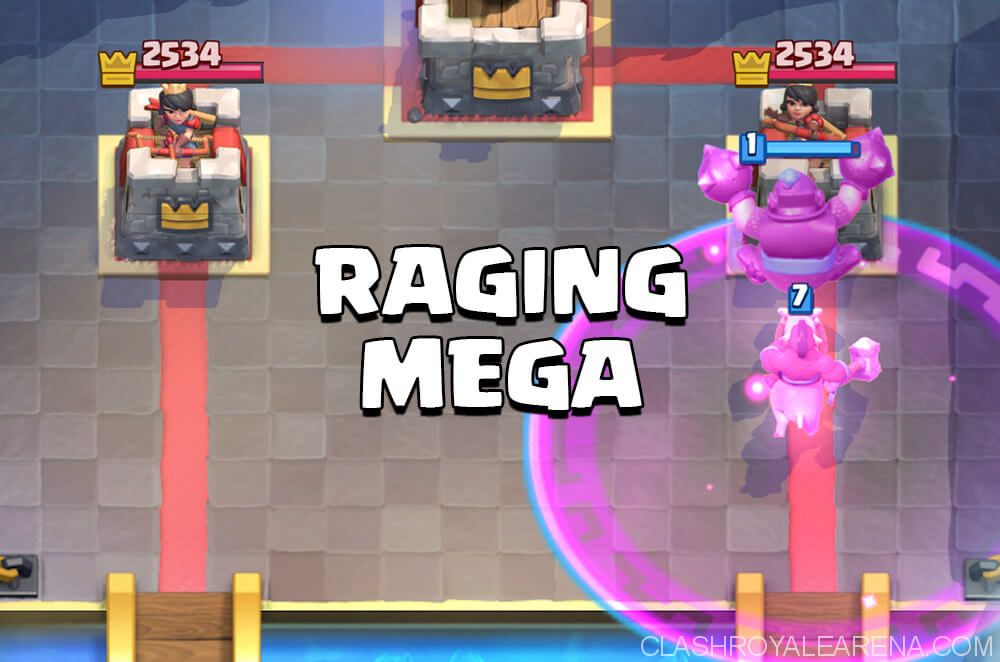 Can be either defensive or offensive. Use it to smash through Barbarians, Skeleton Armies, and more. It’s tankyness make him offensive, as well as his area damage, helping him in clearing Skeleton Armies.

Your main damage source on towers. In a combination of Mega Knight, Lumberjack and Hog Rider, nothing ends good for the enemy. Just make sure that the Hog Rider doesn’t take the damage, and it’s tanked by either Lumberjack or Mega Knight.

Deals damage very quickly and drops a Rage after he dies. Use this to defend your towers if nothing else is available (from Mages, Knights, etc.). Drop him right after the Mega Knight in a push or make him a tank for other units.

In combination with Lumberjack and if left unattended, can get 1 crown easily. Also defensive!

Clear out waves of Minion Hordes, skeleton armies, Goblin gangs. More defensive card than offensive, but can be play both roles.

As well as the mage, use this in order to protect the Tower from Lava Hounds, Baloons, and pretty much anything.

Defensive, I think that anyone knows how to use this, when and why. Also, can be used to punish the opponent for using the Zap, Arrows, etc. by dealing tons of damage very fast, if tanked by someone else.

Use this when the oppnent doesn’t have the Zap, Arrows, etc. or is very low on Elixir. If you master the usage of this, you can end up getting 3 crowns very fast.

Your play style with this deck will be based on counter-attacks.

Be defensive at first. Start by putting a Musketeer or a Wizard behing the main Tower. Wait for the opponent to make a move, a push, then defend it. Afterwards, keep going in with a counter push, using the Hog Rider.

Otherwise, while the opponent is trying to make a push, force him to defend or take advantage of his playing style by placing a Hog Rider on the other lane.

Use the cards as described.

I place the Wizard/Musketeer behind the main Tower, going for the left lane. This way I won’t let the Elixir to stack more than it has storage to.

If he still didn’t place anything, then I place a tank card in front of the Wizard/Musketeer and go for a little push, forcing him to defend and counter-attack you.

I take one crown, then defend my towers. When possible, IF possible, I do another attack on the other Tower, not the main one. This depends if the opponent is low on Elixir after the push on me.

Also, I love to place a Hog on the other lane that he is pushing me, but not before I place my defending cards. This way I force him to spend some Elixir on defending it and reducing his push troops.

The Lumberjack + Wizard can take this one down pretty fast with low damage on the Tower. The Skeleton Army can be used too on it, but when he explodes they will be killed. Also, the Minions can help too.

As I said, the Musketeer + Wizard can bring it down very fast. If you are low on Elixir, you can use the Minions, or the Minions + Musketeer / Wizard.

It can bring down your Mega Knight very fast. They should be destroyed before they do damage. If the Inferno Dragon is used on a push, use the Minions for tanking and putting it down. The Inferno Tower can be destroyed with the Musketeer or a Skeleton Army, but with some casualties.

For the ground ones use the Megaknight and continue with a push. If low one Elixir, the Wizard or the Minions. When facing the Minion Horde, use the Wizard.

Put the Skeleton Army right in the Tower so they take the damage and kill the Goblins. You can use the Musketeer too, or if they are spawned in the same place and you have enough Elixir, put the Mega Knight then continue with a push.

The Skeleton Army takes it out. Also, Minions can kill it fast enough. They can Zap, arrow or Poison them. If this happens, put the Lumberjack and tank it by using some other card.

Lumberjack takes it out fast enough for the Hog to do only one hit. Also, dropping the Mega Knight on your opponent’s Hog Rider push can kill it as fast as the Lumberjack, taking out spam troops or wizards too.

Minions, Wizard and Musketeer. If you use them, the damage is low to none on your Tower. Now, it depends on the cards you have and the Elixir you have. Just use everything that deals aerial damage. And make sure to protect them from ground troops.

Works good vs. aggresive decks on ground, decks that have Elite Barbarians. They can be countered by the Mega Knight , Skeleton Army or even Wizard. Also, the Musketeer + Mage combo can bring down a Baloon very fast. Also, this deck can beat decks that have Mega Knights as well.

If you feel like adding a Zap instead of Clone, or even a Electro Wizzard, then go for it!

I have found that Sparky decks can be a little bit annoying. Just redirect the Sparky into another unit, like the Lumberjack, while a Wizard or Musketeer destroys it! 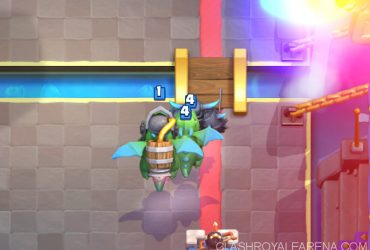 Hey everyone! This is KPK, with my third guide to CRA, after the Mortar Rocket and Lanceyard. Finally, after much anticipation, rolls out the finest P.E.K.K.A Double Dragon with 3 jam-packed … 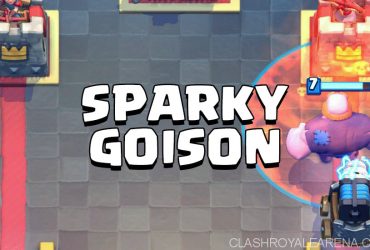 Hello everyone! SparkyIsLife back again. This deck is an old fashioned Giant Sparky deck. It has 2 legendaries but I have a amazing replacement for one. The best thing is …