Hello guys, It’s Japesg from Big Dik Bandits again and today I am going to show you a new Clash Royale Arena 6 deck that got me to Arena 8 with ease. This is my go-to deck, I got it from some top players at the Leaderboards. This deck requires no Legendary and you can definitely use it whenever you want consistent wins to get to Arena 8. I even tried to drop to 2900+ trophies (a few times) but still made it to Arena 8 with ease by using this deck! 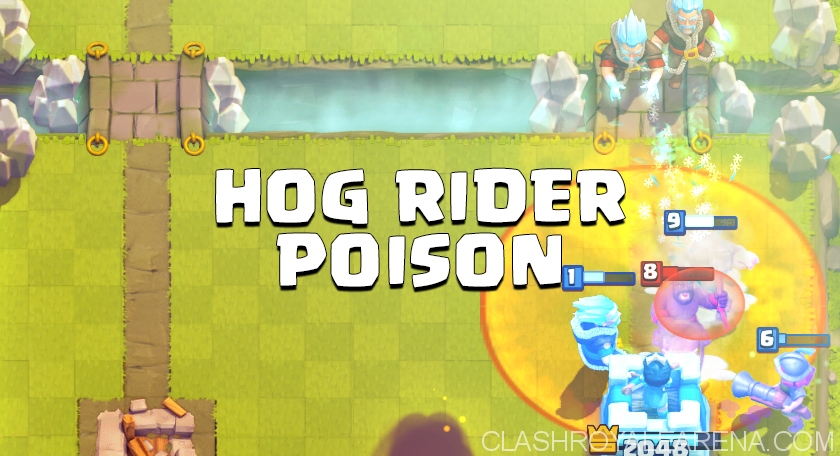 Hog: Obviously Hog Rider is still one of the hottest picks these days. You can somehow replace Royal Giant with Hog Rider in this deck but personally I have found that Hog is just better with this deck. He is your main win condition while playing with this deck. You can easily cycle back to him and chip down the opponent’s Towers during the battle.

Poison: People have been using this card a lot more since the Freeze nerf. Hands down Poison is pretty strong with huge AoE and the slow/drain effect. You can use it on defense to take down many support troops hiding behind a tank. It is incredibly on offense too. Use it to protect your Hog Rider and your opponent can’t deploy small troops to defend. Also, with the help of the Zap, you can easily take out swarms. It is very easy to get value with the Poison because it lasts pretty long. I love seeing it doing chip damage on opponent’s Tower.

Zap is one of my favorite cards in Clash Royale because it í fast and satisfying. I usually use it to kill small troops and protect my Hog Rider push. It can be also effectively used to reset Royal Giant and Inferno Tower’s target. Don’t like Sparky? You can use Zap to stop Sparky’s charge! Just use it correctly and you can deal with almost any Sparky deck.

Valkyrie is one of the best cards in Clash Royale since it was buffed not a long time ago. She has great damage and HP. I usually play Valkyrie in front of my Hog Rider then launch a sneaky push. Lots of times, after defending with Valkyrie, I drop my Hog Rider right after her and push her to the opponent’s Tower.

Musketeer is a very versatile card that card be used on both defense and offense. She is also one of the main win conditions in this deck. To read more about her, please take a look at here!

Skeletons – This is one of my favorite cards as they can bring to you so much value for just 1 Elixir cost. Skeletons can easily distract P.E.K.K.A, Mini P.E.K.K.A, Princes,… They also can do tons of damage If left alone. Because of their Elixir cost – just 1, most of your opponent are not going to Zap, Fireball or Arrow them. I usually couple them with Cannon to take down Hog Rider, Royal Giant, Giant, Mini P.E.K.K.A,… I also often couple them with Hog Rider on offense to deal a little more damage or especially to deal with the Inferno Tower! Don’t like Sparky? Use Skeletons! Don’t like Wizard? Use Skeletons!

Cannon: Even after all nerfs, this card is just great! Place it reactively and wisely is your key to win this game. Due to its lifetime, only place it down once your opponent has sent out the Hog Rider, Royal Giant, Giant Skeleton, Giant, Mini P.E.K.K.A,… 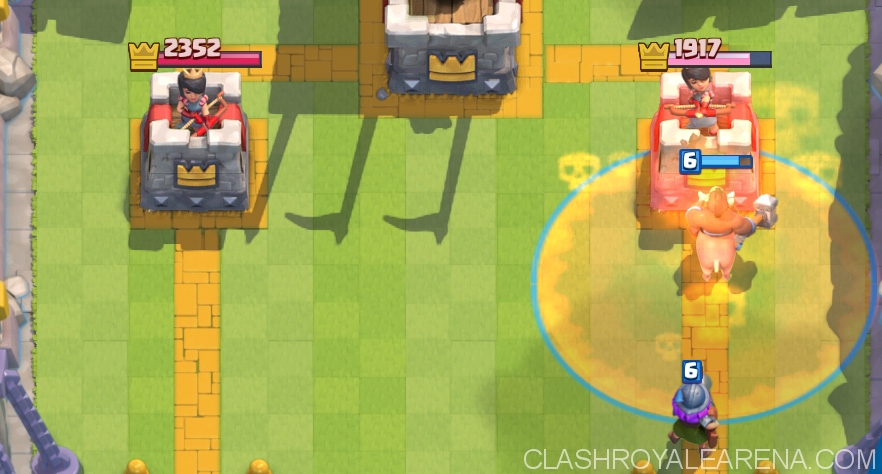 While using this deck, I usually play defensively and capitalize my opponent’s mistakes to launch a counter attack. As you can see, most cards in this deck are very useful for both offense and defense.

Never expect to take down a Tower right away guys! Chip away at it while controlling the battle and maintaining the Elixir Advantage! As far as I can remember, the only time I played aggressively was when my opponent placed a Golem to launch a huge push, I dropped my Hog Rider on the other side so he couldn’t stop it. If your opponent drops a tank on the side you are pushing, simply switch to the opposite one! You can easily work on both Towers or even play for a draw, If you can’t push, it’s much better than losing!

This is a nice deck and I am pretty sure that you will like it guys! Don’t hesitate to comment If you need any help and don’t forget to share this deck with your friends If you like Clash Royale Arena! 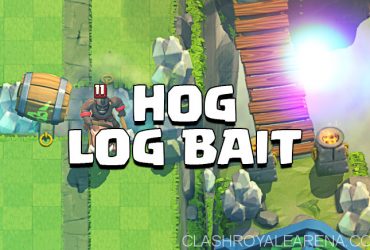 Hey guys! Supermarine here! Now, I know you’re all depressed because this is the last Hybrid Horrors, but after further thought, I’ve decided to (mainly because I can no longer …