It’s me Ideabulb again from the Supercell Forums streaming back with another awesome deck which guarantees a boost to Arena 10. This deck has only one Legend, The chillcasting Ice Wizard, but replacing him as well can guarantee your push to be successful. The reason why this deck is called Robotic Hog is because it is the mixture of P.E.K.K.A + Hog Rider.

Without any futher ado, lets get into the classics! 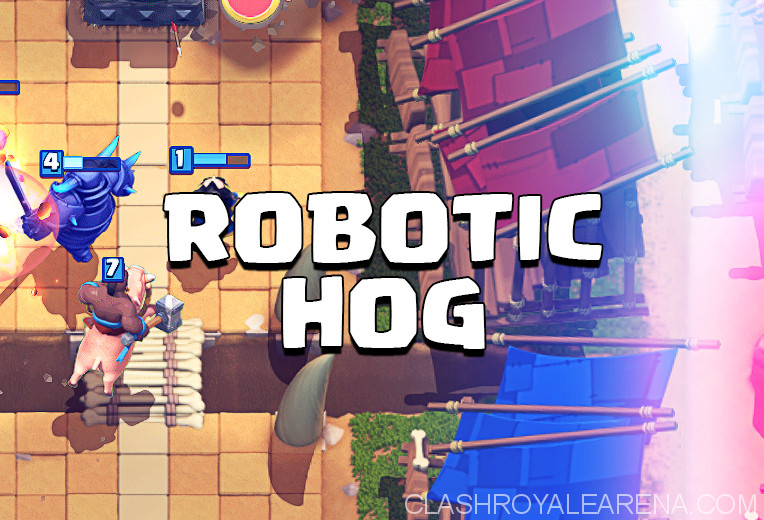 Hog Rider – The classic win condition. Has a snazzy goatee and is a snazzy card as well. Pair him up with the Dark Prince to knock-out Skeleton Armies and those pesky swarms. Use the Pig Push to get advantages on your side.

Dark Prince – An all-star area savage. Punches area damage on normal and double on charging. Makes him very useful in stopping many troops. A high-level ( Tournament Standard) Dark Prince is like a Valkyrie.

P.E.K.K.A – An all-rounding defender, PEKKA absorbs the mightiest blows into his metallic armor. Always serves to stop the toughest troops. From Elite Barbarians to Golems, there is no way this tank is going to die. Since PEKKA tends to be one of the only defensive options in this deck , I recommend that you think before deploying him, since this might cause the opponent to deploy his main win condition in the opposing lane. It is best to use the PEKKA as offense in Double Time. It’s also a good idea to push the PEKKA with the Hog Rider + Dark Prince, to get more benefits. Try using PEKKA +  Ice Wizard to eliminate air troops faster. PEKKA + Ice Wizard + Hog Rider + Dark Prince + Goblins guarantees you one full tower. PEKKA is your second win condition in this deck.

Goblins – Three green , mean and zap-resistant goblins are ready to accompany you in this Geared Adventure. Very useful in stopping glass cannons. Surround area damage troops. Don’t use it on troops you know they’ll get killed by.

Ice Wizard – The classic man with the hot handlebar and a cold chillcaster, the Ice Wizard rocks on defense. The hard-core defender is always ready to pack some snow. Works awesome when paired with the PEKKA.

Zap – A classic shutdown to many cards, commonly the Skeleton Army and massively reduce the hitpoints of Minion Hordes. If you have a high level zap, you can easily defeat Goblin Barrels.

Poison/Fireball – Now this a choice you must make. Truthfully I like Poison since it can easily eliminate Graveyards and Hog + Poison actually works now. secondly Poison can easily finish Spawner Buildings.  If you prefer to deal clutch damage, I recommend you use Fireball.

Many of you in Arena 7 would have the problem that you might not have found the Dark Prince yet, or others haven’t unlocked the Ice Wizard yet. So here are some answers to those.

All right, here begins the termination of instant death.

After wishing our opponent the very sarcastic yet sportive Good Luck, we proceed to demonstrate this sarcasm.

Make the simple Hog + Dark Prince + Goblins push. Always try to make the Pig Push to make your way out of buildings. You can also keep cycling with Hog Rider and Poison.

Regular Time is always meant to stabilize and reveal most of the opponent’s cards.

Now PEKKA doesn’t count as a surprise card since its one of our best defender in this deck.

Once the PEKKA successfully defends the attack, this is when we convert the PEKKA into Offense! This is where things get nasty and where we apply the butter on the biscuit. Deploy the Ice Wizard or Dark Prince + Poison. If you’re lucky enough, you can create the Robotic Hog Push.

PEKKA + Poison can always shutdown any glass cannons to prevent damage to the PEKKA.

We still keep the PEKKA for defense since  its the most reliable defender. But we focus more on offense with the Hog Rider.

When the defense is successful we push the PEKKA with our cards. If the opponent easily counters this, then make a Double Lane Push!