It’s about time, guys. I mean, CRA is back, it’s a nice news.
To celebrate this, I’m writing this guide. Very reasonable, I’m so proud of myself.
I am Shiro from Hanoi. Today we’re taking a look at Mortar Hog, featuring some changes because the old deck got nerfed hard.

Hog Rider: Primary win condition.
He’s usually your main source of damage (because of Beatdowns), plus he’s very easy to play.
Because this deck is very swarms-heavy, you won’t have many cases in which you have to play Hog to kite.
If you guess they have hard counters like Tornado or anything like that, you’ll have to play Mortar much more.
You should always hold your Zap for swarms.

Mortar: Secondary win condition.
Should only be used offensively when you had identified your opponent’s deck. Otherwise, save it for defending.
Placements are really important with this card, especially the defensive placements. Make sure you learned it before playing this deck.

Rocket: It fits the deck very well, don’t ask me why.
We chose Hog instead of Miner, so we can’t take out Pump, that’s why I use Rocket here.
It’s a key versus Balloon cycle (yep, not LavaLoon), X-bow, E-barbs, etc.
Often, you’ll have to cycle Rocket because it’s not always easy for Hog nor Mortar to lock on the tower, so maybe I’ll call it third win condition (LOL).

Zap: We don’t have The Log here.
So why zap and not The Log?
Zap is more F2P friendly.
I didn’t mention about other cards, but I’m telling you that this deck has lack of defense vs air swarms, so Zap is Necessary.

Valkyrie: Main tank, main AOE.
She is OP I would say. She is Rare, not Epic nor Legendary. She is OP, especially on a ladder.
Actually, I have nothing to say about this lady.

Spear Goblin: Swarms.
What did I say? It was ‘changed’, but not really a nerf.
It’s even stronger now. With the damage buff and the nerf of Ice Spirit, they’re no longer be shut down by 1 elixir.
They can counter Graveyard, insane value there.
They’re ground swarms, it’s an advantage vs Princes, and when pairing with GG, you can pull the Mega Knight to the King’s Tower. 5 vs 7, and the activation of King’s Tower. Value!

Bats: Air swarms.
I used Hog and Rocket, so I use Bats instead of Minions or Horde.
If you use Fireball instead of Rocket, you can use Minions in this slot, totally OK, but I prefer Rocket.
Pretty self-explanatory…

Very F2P friendly, right? But it’s dominating at 6k+, very crazy I would say.
Which card to be upgraded first? Go for Gang>Bats>Zap>Rocket (you want to one-shot Sparkies)
If you don’t care about F2P elements, go and see Mortar Rascals.

Early game: (3:00 – 2:00) Figure out their deck.
It’s a bait deck, you have to depend on their deck.
Like in 3k – 4k5 range, you’d face a lot of Ebarbs, Hog, RG, and Giant, so Rocket and Mortar are the keys that you don’t want to spend on unnecessary cases.
Generally, you should play passively and cycle Hogs.

Mid game: (2:00-1:00) This is the shining range of the deck.
You should have known what deck they’re using (of course, prepare for their pocket card).
This is a 1-0 deck, if you got a tower at this time, defend with everything you have and it should be GG.

Late game: (1:00-end) There are 3 cases:
– Their tower is low. Cycle Rocket if you can’t be punished. Cycle Hog and defend with cycle cards for the last Rocket if you can be.
– You couldn’t reach their towers at all. Go for a draw. It’s a really rare case.
– A huge push is coming. You know it’s impossible to stop. It’s hard to say what to do. Buy some time with Mortar and go for the other lane, even if it had 2k+ health.
Mortar can’t do anything offensively here if they’re running Beatdown/Siege. This is why this deck is weaker in Late game.

Match-ups: I’m covering only the most noticeable match-ups of this deck.

Golem: The hardest in my opinion. We have a lack of air defense.
The key here is to prevent them from building up a huge push by pressuring the other lane with Hog + Supports.
Really, it’s very difficult because just a Golem and a Night Witch are enough of trouble for us.

LavaLoon: See the ‘Golem’, except the last sentence.
If you screwed up with Mortar placement, say GG.
Really, the chip damage from Pups and Balloon‘s death damage are enough of trouble for us.

Giant: I hate to say something so many times.
But this is the easiest in 3 Beatdown match-ups.
No, it’s in the cases their deck is not Giant Night Witch…
Damn Ash, he always shares dirty decks.
Giant NW has Giant and NW. NW is one of the hardest counters to us I believe.
And Minions, and Minion Horde.
You can do well against other Giant decks (Giant Miner Poison, Giant 2 Prince, Giant Sparky, etc), surprisingly. Just Mortar defensively, swarms give you DPS and Valkyrie helps tanking.

Royal Giant: Laughable but I have to say something.
Many dudes are using   RG on 3k-4k6 because it’s easy to over leveled.
Well, your Mortar can be over leveled too, but I don’t suggest that because we need to upgrade Gang first.
The thing I want to tell you is you need to remember the placement of Mortar against RG, look for it on Google, please.
Add in some DPS along with Mortar, and they’ll screw.

2.6 Hog Cycle: Although it’s not too strong at the moment, JACK’s performance makes me worry a lot.
Cycle decks perform well vs medium decks, but Siege counters Control. So it’s 50-50, depends on skill.
You can use Mortar offensively, but don’t overcommit or they’ll rush the other lane.
Don’t give them spell value, nor predictable gang.
Bats will give a lot of damage since they don’t have a proper answer for it, so take advantage of this.

Other match-ups are either 50-50 or easy, I believe you won’t have problems while using this deck. 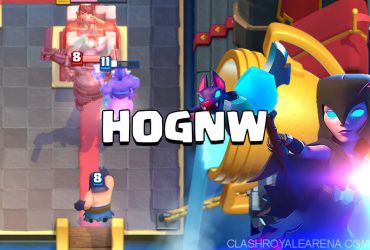 Wassup guys! It’s DabMaster2 again and today I’ll be showing my Hog Night Witch deck which I call the Harbinger combo. This deck is an absolute meta crusher because it … 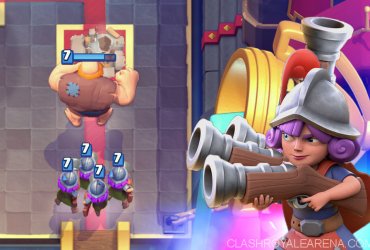 Hey guys Lolman here with another deck I want to present to you, the Giant 4 Musketeer. This deck was created by Tobias Spirithawk and in my opinion, this is …