Hey guys, TrainerJoshua back with my 2nd guide. Today I’m showing you a new and improved Hog deck I made after the Balance Updates recently. This is an improved version on my other Hog/Bowler/Rocket deck, which you can see at here. I’ve adapted this new deck to the new current meta, which primarily features Zap Bait decks, and Hog/Rocket/Skeleton Army decks. With the meta shifting out of Goison and P.E.K.K.A/3 Musketeer due to the Elixir Pump Nerf, this prompted for the new Zap Bait decks, which are extremely prevalent in challenges, due to the Skeleton Army Buff and the Goblin Barrel buff a few patches ago. I have had a lot of success with this deck so far, winning my 12-1 twice in a row in challenges. Let’s get started 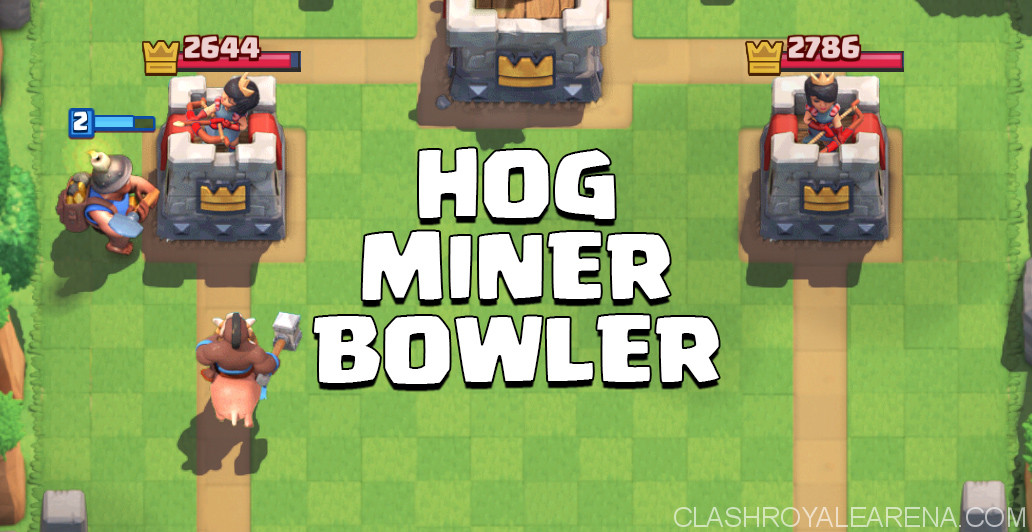 In this guide, I will be explaining how to use the deck. This deck is a control deck, meaning that you play more defense than offense, countering pushes for a positive elixir trade, before a massive counterpush begins.

Hog Rider: The Hog Rider is slowly making its way back into the Meta with upcoming Skeleton Army/Hog Decks. The Hog Rider applies a lot of tower pressure on your opponent, dealing a whopping 264 damage per swing. Sending out a Miner right before the Hog Rider is sent can be an effective combo. As the tower is distracted by the Miner, the Hog Rider can deal extra damage while the Miner also helps destroy it. You can pair the Hog up with the Fire Spirits for a quick assault, or play your Hog Rider once you have a counterpush with the Mega Minion, Bowler or Ice Wizard for support. Overall, this High Damage, High Hitpoint unit is incredible when comboed correctly with other cards, and is the core of this deck.

Miner: Though Pump is not as prevalent anymore, the Miner can still be used if it comes up. In this deck, the Miner is used to act as a tank for the supporting units behind after a huge counterpush. Paired with the Mega Minion or Hog Rider, the Miner will provide sufficient tank for the units to deal some hefty damage. You could always use your Miner on defense if ever required, as it deals 160 to troops, which is pretty good.

Bowler: If you’ve seen my guides before, you would have seen that the Bowler makes an appearance in all of them, as it is an incredible card for defense. The Bowler is blessed with high hitpoints, splash damage and a pushback effect, stopping a large amount of units and combos, especially Hog Combos, as it destroys the small troops behind it with ease. It is important to place the Bowler correctly, as to make the most use out of his linear rolling attack. For example, if there is a big push with many low hitpoint troops hiding behind a tank, then the Bowler should be placed directly in front of the tank so his boulder will roll over all the troops behind it. Against the Meta, Bowler takes out the Skeleton Army, Goblin Barrel, Ice Spirits etc. if placed correctly. Once you’ve defended with the Bowler, it can turn into a counterpush for your Hog Rider, taking out Barbarians if paired with a Zap or Fire Spirits.  Overall, the Bowler, dealing 239 damage per bowl, is an amazing unit on defense and on offense, countering most cards very effectively.

Fire Spirits: The Fire Spirits are the main Minion killer, for just 2 Elixir, the Fire Spirits can take out a Minion Horde alone. It also is used to counter Goblin Barrels, Skeleton Army, Goblins, Musketeer, Mini P.E.K.K.A, all for positive or neutral trades. The Fire Spirits also take out the Lava Hound Pups that come after the Hound has popped. I strongly recommend you take a look at this guide to read all tips for the Fire Spirits!

Zap: Zap acts as a primary source of Elixir trades as it can help handle flying units when Fire Spirits are out of rotation. Zapping a Minion Horde, Minions and Skeleton Army to the point where the Tower only needs to deal the finishing blow will provide lots of good trades. Zap is also a quick-reaction card as there is no travel time and it is a card that can’t be countered. Paired with a quick Hog/Fire Spirits Combo, the Hog is almost always ensured some damage, which is good.

Mega Minion: The Mega Minion is practically in almost every deck recently, and for a good reason. It has high DPS with decent HP for only 3 Elixir. Additionally, the Mega Minion can be very useful when taking out groups of troops unlike other high DPS troops due to the fact that it cant get hit by some of them (Barbarians, Goblins, etc.) When used on a counterpush, the Mega Minion should never be ignored, and if it is, it will deal monstrous damage to a tower, practically taking it out.

Ice Wizard: This is your air and ground support for your deck. Paired with the Bowler, it destroys 3 Musketeer, Opposing Hog Pushes and Barbarians, and is versatile in almost all defensive situations due to its low 3 elixir cost, in conjunction with its 35% slowing capability. It can also be used offensively once you pair it with the Hog Rider as it slows the enemy Arena Tower, allowing for more hits from your Hog. In this Meta, the Ice Wizard can take out Skeleton Army and Goblin Barrels.

How to use this deck against other decks

This deck is the new Meta Destroyer. Use it, it’ll work very well.

Until next time, TrainerJoshua from Aussie Legends.