Hey guys I’m ApocD21 of Clashicide and I want to introduce you to a deck I have many 12 challenge wins with this deck! And this deck received some great little buffs in the recent patch. 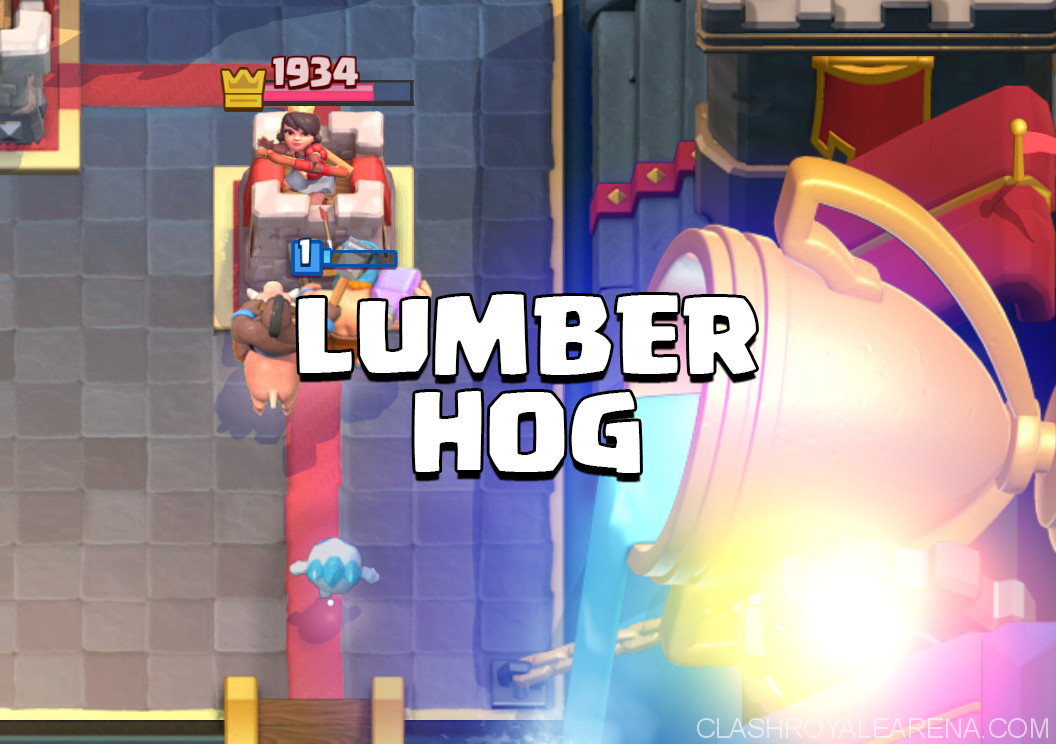 The deck is very fast. I often playing at low Elixir to keep beat down decks from producing large pushes and to out cycle my opponent getting more Hogs in during the game.

Hog Rider is obviously the decks main win condition but with the changes in the recent update Hog Rider received a stealth buff.

Hog Rider no longer needs to pig push to bypass 4×2 buildings slightly in the other lane. Instead he just goes right by them. This buff not only saves Elixir by not needing to use Ice Spirit/Skeletons to pig push but allows you easier pressure the other lane if they place something like a Golem/Lava Hound in the back.

Lumberjack (LJ) is often your secondary win condition and connects with the tower a surprising amount. LJ has been underused pretty much the whole time in Clash.

Compared to Mini PEKKA and Knight he has about 100-150 less HP at Tourney standard than those 2. But the big difference is in the movement and hit speed. LJ hits every 0.7 compared to Mini PEKKA’s 1.8 hit speed making LJ attack speed about 2.5x faster. He is even about 1.5x faster than the Knights hit speed. This makes LJ very adept at killing Graveyard, Skeletons, and various Goblins on his way to the tower

But with the last patch the subtle buff to his rage by 1.5 seconds is actually really nice and comes in handy. It allows for an extra tick of Elixir that could allow you to play a Goblin Gang or Hog into it.

Since those guys are also very fast the rage gets them to tower frequently before players can react or even miss defense placement. These small perks add up to him being better in this deck than Knight and Mini PEKKA.

Skeletons offer so much value for so little cost. I often use them to counter Musketeer, and Mini PEKKA as they cross the bridge but are also great at stopping Elite barbs with the help of Electro Wizard or Lumberjack.

They also net positive trades vs Giants, Hogs, and Golems often because they have great DPS and opponents often zap or lot them. Allowing you to then safely place your Goblin Gang for even higher DPS and counter attack potential.

The Log– Best Card in the game in my opinion. Games can be won with the Hog Log combo keeping Skeletons, Skeleton Army, Ice Spirits, and Goblins off your Hog. But also it often allows for extra hits by when facing Barbarians / Elite barbs because of the knockback/ mini stun.

Obviously great at killing princess and Goblin barrel but when facing true bait decks I often Log Princess / Skeleton Army and use other counters vs barrel.

Princess is the catch all card. Providing chip damage at the tower, split pushing the other lane to waste opponents Elixir, killing Minions that are protected by tanks, and general swarm control.

Her role changes drastically based on matches. But she is extremely important vs Minion Horde to this deck as we don’t have other great answers. So be prepared so save her if they have Minion horde.

Electro Wizard (Electro Wizard) is your main defensive card and should be used as such often with your swarms or Lumberjack as tanks for it.

You will want to use Electro Wizard vs all the big tanks. Vs Hog he is interchangeable with Lumberjack as if placed right will only allow one hit to the tower. Electro Wizard plus Skeletons makes very fast work of a Golem. Electro Wizard really shines vs Lava Hound. he will often kill Mega Minion and regular Minions while cleaning up the Hound, or chain resetting inferno dragon.

Make sure to protect him from miner with your Goblin Gang or Lumberjack.

Goblin Gang is a very versatile response to many cards.

On defense I often use it to stop Goblin barrels just make sure you place it fast just behind your tower so that Goblins have a chance to move up and cover the whole tower. They are also great vs Musketeer, Electro Wizard, Elite barbs, Graveyard, and in a pinch work somewhat well vs regular Minions / Lava pups as the stab Goblins tank for the spear Goblins.

The best part about them is they often survive defense and immediately turn into a counter attack with Hog Rider that can wipe out a tower.

Rocket: Finally there is the Rocket. Rocket is there for heavy defensive decks, stopping monster pushes, and ending games when the tower is 493 health and below. Sometimes getting a Hog to the tower is close to impossible if they have something like Cannon and Bowler and this is your alternate win condition.

Rocket kills Executioner and Sparky when placed in the back and makes for a great basically free 493 damage on the tower. Rocket often gets used on Balloons in this deck as a Balloon protected by Hound or giant sometimes is difficult to kill in time for Electro Wizard and princess.

Rocket is by far the least played card in the deck and some matches you wont play it at all. but others you will be so happy you have it as you Rocket their executioner Golem and Mega Minion and then your Goblin Gang crushes their Golem.

If the tower is below 493 I often ignore it and start using Hog on the other tower. Oh and great for crushing Elixir Collectors.

Vs Lava Hound. Your goal is to keep them on the defensive. Keep log for Tombstone or Skeleton Army to get your Hog to the tower. use princess to not allow them to get Minions and pups on your tower while Electro Wizard slows and stuns the Hound and either dragons or Mega Minions. I often have to use Rocket on Balloons because if it reaches the tower that is way to much damage. But it also takes out a huge chunk of the Hound’s hp. Rating Positive

Vs Graveyard Cycle. Such as Knight / Ice Golem with Graveyard / Poison. This isn’t an easy matchup and you will probably have to change your response frequently depending to what spells they have in cycle. LJ is great vs the Skeletons or the Knight. Goblin Gang is great if they don’t have Poison in rotation. If they always play Poison with it you will want LJ for the Skeletons with Princess behind the king and use Gang or Electro Wizard for their tank. The most important part is to make sure you avoid the Poison and have troops left over to counter attack with at the end. it takes some getting used to but once you do the match up turns pretty good as LJ tanking and then leaving a raging Hog can happen often. Rating Neutral.

Vs Giant or Golem Lighting. Keep your Electro Wizard to the side of the tower and don’t let it get picked off by something like a Musketeer. Use LJ to execute the Musketeers or executioners when they cross the bridge. Once LJ is down use him to tank and spank allowing Skeletons or Gang to kill the tank. Often you will out cycle them so badly that Golem decks won’t get more than 1-2 Golems in the whole game. Don’t let them pump up. Rocket those Elixir Collectors down hopefully with great chip on the tower :D. Rating Positive.

Vs Goblin Hog Inferno. If they have inferno tower in rotation don’t play more than just Hog so that it is plus 1 for you. You can use princess to get rid of it if need be. I often use log offensively to clear the Skeleton Army / opposing Goblin Gang to get Hog to the tower. This match is very chippy and princess and Rockets are likely going to be needed to finish off the tower. But they have an extremely hard time damaging you as well. Positive.

2.6 Hog/ other low cost cannon decks. Cannon is the true counter to Hog and 2.6 Hog is lower cost than you and it is hard to get value out of Rocket compared to their fireball. Best option is to get a raged Hog with Goblin Gang support for a counter attack. Rating Negative.

Vs Bait decks. Generally, all your cards counter their cards princess, Electro Wizard, log, Gang are all great vs swarms and barrel. Only thing is to be prepared for Minion horde and you can Rocket it as a last resort.

Vs Miner Poison. It is important to counter their miner with LJ or Electro Wizard to protect damage. Most of the other stuff is spell damage. This match up can often come down to spell damage and your Rocket should be used to kill things like Musketeer or Electro Wizard next to their tower. If you get one tower down, you will have a big advantage in a 1/1 game as a Goblin Gang where they want to place buildings to stop a Hog can often crush them. Rating long and drawn out but positive in the end.

I hope you enjoyed and found his write up helpful. If you would like more tips and tricks about this deck tune into my stream!