Now, I know you’re all depressed because this is the last Hybrid Horrors, but after further thought, I’ve decided to (mainly because I can no longer continue it myself) allow somebody else to keep this deck series alive!

I know you guys think this series is totally awesome, and are sad to see it “end.” That’s why I’m doing this!

If you think that you want to continue the Hybrid Horrors series, please, please, PLEASE notify me in the comments!

Anyway, I will be concluding my contribution to the series with a Wallbreaker sized BANG with an iconic Hog Logbait deck! Let’s get to it! 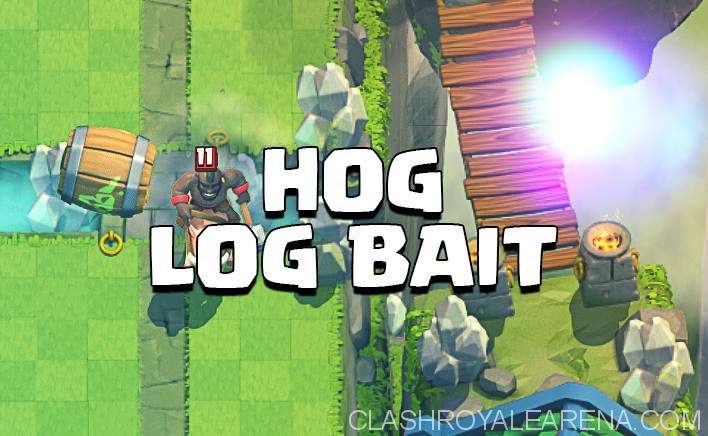 Of course, this guy will be your main win condition. Despite his nerf, he is still a force in the Arena.

He has very good health, very good damage, and still has a faster attack speed than the eWiz!

Other than being a win condition, he is also a tank for your Goblin Barrel.

Mostly, it’s roles are self explanatory. Just remember: Against Zap, Log, or Arrows, use the Deep placement (I call this technique JukeBarrel) to bait their spell, then rush in with other troops!

The Goblins can also provide a shield for the Hog again troops like Fire Spirits or Ice Spirit.

The life of everyone’s party, the Princess fires flaming arrows that are very hard to escape.

She also has enough range to not get shot at by the Arena Tower if she attacks it!

However, she has two main roles in this deck: Lane control and Spell Bait.

She can kill that Minion Horde attacking the Hog and at the same time bait Arrows or The Log (rhyme time!), allowing the Goblin Barrel to go in unhindered.

Also, she is relatively cheap, meaning if things go south, you’ll still have plenty of Elixir to make up for it!

Essentially a tactical nuke in the wide world of Clash, the Rocket can be used to absolutely destroy most glass cannons in its path.

Capable of tackling Musketeer, Executioner, and even heavy hitters like Balloon, Elite Barbarians and Sparky, the Rocket can be used to get tons of positive trades on defense.

However, you must use it sparingly.

It’s 6 Elixir, and one misfire can possibly cost you an Arena Tower!

That, my friends, is the sound of doom headed towards all of your troops.

This big, solid hunk of wood can cripple Princesses and Dart Goblins, annihilate Skeleton Armies and Goblin Gangs, and even move tanks closer to structures and tank killers like Inferno Tower and Tesla!

It’s also cheap, so you can use it to gain an Elixir advantage as well, however it does give the chance for Bait users to force it out if you’re not careful.

One more thing, though: Do NOT Log Minion Horde (Rule #5 of being a good 2v2 player)!

Simply just three ruthless bone brothers with shields, the Guards have very good DPS that saves your bacon more often than not.

They are also useful for cheap cycle, whittling down the health of tanks and mini tanks, and also for surrounding splash units.

An all-around MVP of any Logbait deck, including this one!

Murdering tanks is what it does, and does well, killing Giant, Golem, P.E.K.K.A, Royal Giant and more!

Just protect it from reset cards like Ice Spirit or Electro Wizard!

This one lively little guy only costs one Elixir, yet he is much more useful than some other crummy cheap cards.

He can take down entire swarms if placed right, and also protects Hog Rider from dangerous Inferno Towers and Cannons and even the spawned Skeletons from the Tombstone!

Keep in mind that you can play this deck in two (or is it three?) ways

But, whatever play style you’re using, your priority during this time should be to get some good damage done.

Counterpushing is wise, as it allows you to gain some ground and immediately force your opponent to transition from offense to defense, giving you an advantage.

This is when you need to take the Tower.

Defend wherever necessary, and counterpush if you can. But, once the opponent’s Arena Tower is at 1,000 HP or lower, you can use the Clutch Combo, which is Rocket+Goblin Barrel!

Place the Rocket, then quick-drop the Barrel in the same spot.

If all goes well, the Barrel should be concealed by the smoke of the Rocket, and the Barreled Goblins should finish it off.

Giant: Definitely use the Inferno Tower.

Use the Guards if it gets Zapped, then counterpush with the Hog.

Golem: A much harder matchup than Giant.

Again, you must use you Inferno Tower, but if it gets attacked by Lightning, your Tower is screwed.

So, to prevent the oh so dreaded Lightning on the Inferno, once Golem gets placed, rush the other Arena Tower with Hog+Goblin Barrel.

Alternatively, you can place a Princess at the bridge to punish as well (it’s definitely cheaper), but it’s always wise to save her for defense too!

P.E.K.K.A: Harder than Giant, but easier than Golem.

This is because P.E.K.K.A is distracted by the Guards, making things easier for the Inferno Tower.

However, she does have high health and damage, so if she does make it to the Inferno, then it will most likely die in one hit (a chunk of its lifetime would have gone by).

Use Princess+Rocket on the Balloon if there is one.

If a Miner comes instead of a Balloon, use the Guards to block the Miner, and use Princess on the resulting Lava Pups once the Hound dies.

Use the Guards to distract any support troops and Ice Spirit to freeze if necessary.

One is to use your Inferno Tower, and the other is to rush the other lane with Hog and Goblin Barrel, and defend the enemy Hog with Guards.

The first option lets you defend with little to no damage, and the second gets good damage done to the enemy while also allowing you to defend with a spell-proof troop; however your Tower will be hurtin’ a little.

Either way, you’ll be getting the job done.

When they place their Pump, rush the lane with the Pump using Hog and Goblin Barrel.

Make sure you place the Barrel on the Pump and not the Arena Tower. This allows you to save your Rocket for their Musketeers.

If they split and you hit the side with two, simply kill the lone Musket with Guards.

Graveyard: Guards are an amazing counter to this card.

Siege: It’s very wise to just use Rocket on the structure if it’s an X-Bow.

In fact, you have three counters to Siege: Hog, Rocket, and Inferno Tower!

Mortar will be tricky because of the dead zone, so use Inferno Tower to kill it and any defenses around it.

Use Princess for crowd control if necessary.

Miner Poison: The Guards should be able to kill the Miner before Poison kills them.

If not, use the Log to finish him off.

Against any tanks paired with Miner, use Inferno Tower. Use Ice Spirit to freeze if necessary.

Spell Bait: Defense versus Bait should be easy with the Guards, Log, and Princess.

However, during Double Elixir, FIRE YOU ROCKET FIRST.

Rocket cycling is very key versus other Bait decks, and if your opponent cycles the Rocket first, you’re screwed. However, you have the capability to recover and punish by using Hog+Log if they fire their Rocket first.

If you fire your Rocket first, do NOT let them punish you using the Princess or Goblin Barrel.

Mega Knight: Use Guards to surround, and Inferno Tower to kill.

Use Ice Spirit to freeze if they Zap the Inferno Tower.

So, that’s the end of this deck guide. But, this series doesn’t have to end.

Remember, if you want to continue this series, do notify me in the comments.

Be sure to look forward to my new Ultimate Guide and second deck series (I might not work alone on that one), as they will all be coming soon! Cya!

Here are the rest of the Hybrid Horrors decks: