Hey guys, this is Deepshul GaMeR from ROYALE BEASTS. I will be sharing a deck that literally counters Mega knight, P.E.K.K.A control and to some ‘extent’ log bait.

It is a balanced deck and has good air defense. I got 12 wins with this deck recently.

Pong TV used this deck to get 12 wins and TOP 10 GLOBAL. No more boasting, let’s get to the deck right away! 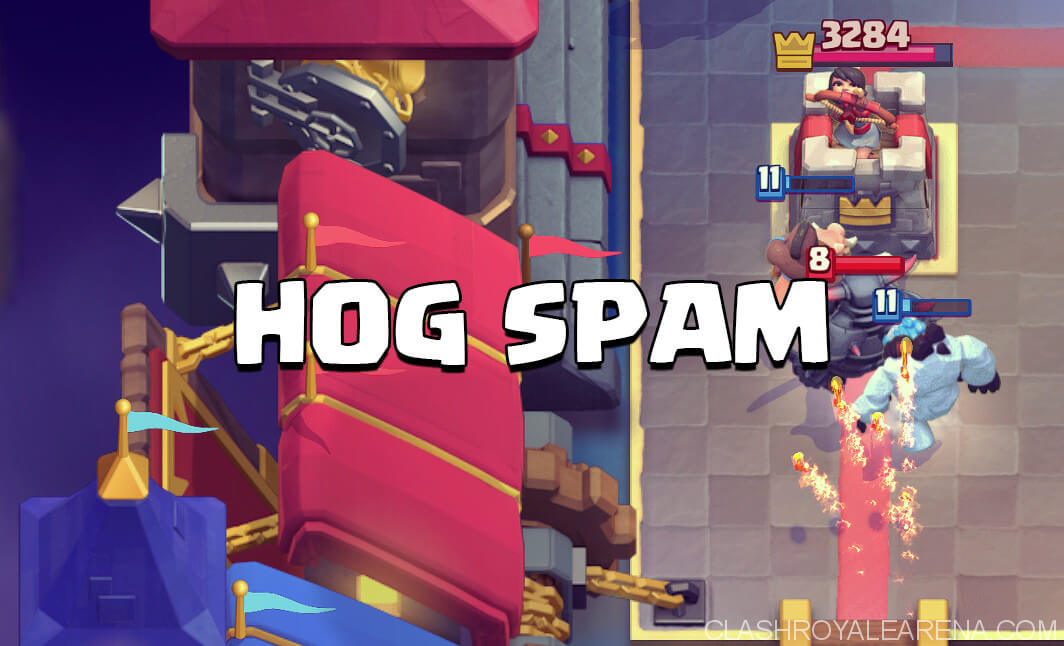 Hog Rider: Cheap, strong and agile, this win condition can destroy the princess tower in not more than a few pushes.

Pair him with goblins or the Ice Golem and he will be very hard to counter.

Spam the bridge with Hog + Bandit in double elixir and get guaranteed, easy and free damage!

Looking for Hog Decks? Head on to this(Link) page to find the best hog decks out there!

Ice Golem: Very good mini-tank and efficient too for having such an impressive cost-to-value ratio. When paired with Hog, it can help the Hog get 2-3 extra shots, as it temporarily distracts their defensive units and slows them down for a bit.

Can instantly kill minions when paired with Zap. It is essential against mega knight to kite him into the other lane and let the inferno dragon tear it down. That’s also how you kill a PEKKA.

Overall this card is the silent killer of this deck.

Goblins: These guys have become very popular after skeletons got nerfed to three!

For one extra elixir, it provides so much more damage and synergy with our win condition, the Hog. When used with Hog, can kill the support troops easily with their high DPS.

This card is also the optimal/best counter to a Hog , especially when they have no Log and have Zap instead.

Inferno Dragon: It was once known as the flying trash can/trash can with wings, but not anymore.

Inferno dragon is the tank MELTER (get it?) of this deck. This card became popular during the Bridge Spam meta and is still widely used because it is a great counter to MK.

Gives infinite value and doesn’t die to lightning. Very dangerous if you can stack many of these guys.

When you see a tank quick drop it and an ice golem to tank pesky minions, bats or any air counter. Against MK and PEKKA, KITE and MELT.

Bandit: After her not so recent buff she is used in all archetypes of the game.

When incorporated into a hog deck she makes the deck shine. She removes all support troops with her dash and when she dashes onto the tower, you’re done (opponent).

Very good behind the hog as well. (replacements below)

Lightning: This is the high damage dealing spell of the deck.

Gets huge value against big tank pushed with glass cannons behind them. Gets rid of elixir collector with damage on the tower.

Helps in removing the E-wiz from the map and letting I-Dragon wreak havoc.

Also synergizes well with Hog as it stuns and counters Inferno Dragon and Tower pretty well.

Princess: Last but not the least of the legendary cards, the Princess.

She is so good at killing low HP units from long range. Also helps spam the bridge.

Just like the Inferno Dragon, getting 2 or more on the field can make your opponent rage quit.

She is the Ultimate Support Card (USC).

Zap: Low damage dealing, cheap and versatile, the Zap is the staple of all hog decks in the meta.

If you don’t have Princess in your starting hand, drop Goblins or Ice Golem at the back and when it reaches the bridge, drop your Hog.

As Hog decks are stronger in single elixir it is necessary to make at least 2 Hog pushes (Hog+Gobs/Ice Golem paired with Zap) in the first minute.

With this deck, it is not that bad if you overcommit a bit! Most matches end as 2-1 victories because this deck doesn’t have robust defense.

Feel out the opponent and his/her deck and don’t overcommit too much.

By now you would know your opponent’s deck and playstyle.

Counter their pushes with the least amount of elixir possible (sometimes you will see Pong TV giving up a tower to get a 2-1 victory). Play this deck more like a control deck in this time frame.

Defend and drop a Hog in front of the defense troops as a counter push. Sneakily drop the Bandit in between/during your pushes.

Most hog cycle decks are not so strong in overtime but this deck is!

After defending a push, you will usually have an Inferno Dragon/Bandit or an Ice Golem.

If you have stacked up princesses/Inferno Dragons, you have a very strong chances of winning.

Some very strong pushes during overtime:

Golem Beatdown: Push the other lane with 10 elixir.

Inferno Dragon for Golem and Ice Golem/Lightning for support troops.

Not that hard to counter.

P.E.K.K.A. Control: Always try to push the other lane than the lane they drop their PEKKA in.

When you know the opponent will defend your Hog pushes with P.E.K.K.A, always push with Ice Golem+Hog+Inferno Dragon.

Use Bandit or Lightning to get rid of support. The key is to not to let them build up a huge push by switching lanes often.

Lava Hound: This win condition might be hard to counter.

Assuming you have pushed other lane, when the Lava Hound comes to the bridge, use only princess to get damage onto it slowly.

Only if the opponent drops Loon, use I-Drag.

Use Zap and lightning to clean up pups and support.

Hog Decks: The Hog Decks that are in the meta are mostly Hog Cycle.

Use Inferno Dragon or Goblins if they don’t have Log to counter the Hog and Ice Golem to block support.

Log Bait: Use Princess and Goblins for the bait and save Zap for Goblin Barrel.

When pushing try to out cycle inferno or use lightning in overtime.

Siege: Use Ice Golem to block.

Out cycle/use lightning and win!

In Double Elixir keep spamming so that they can’t drop their three musks.

Thanks for reading this long 1200-word guide. Hope you have success with it! Check out my YouTube channel Deepshul GaMeR. Clash ON! 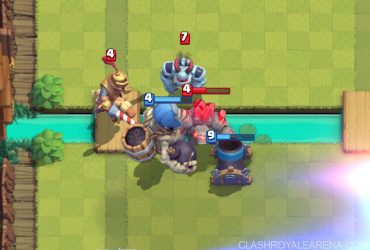 Hey guys, it’s NebulaNoodle here again with another deck guide! Pros: Cons: I have always loved ‘defend and counterpush’ type decks so I really love this deck. It has a … 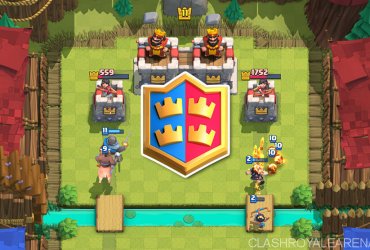 Hello guys, it’s PeakCell. I’m now coming up with a guide about an incredible deck you will love. As you guys may know, I’m more of a 2v2 player, and I …