Hey everyone! It’s WhiteLlama67 here again today, this time with a deck for all you F2P’s and especially new players out there.

With 6 commons, 2 rares, and a lot of potential, Hog Cycle is back!

Disclaimer: I did not create this deck, and I not sure who did. I’ve just seen it a couple times and I tested it out, and decided to write a guide on it. 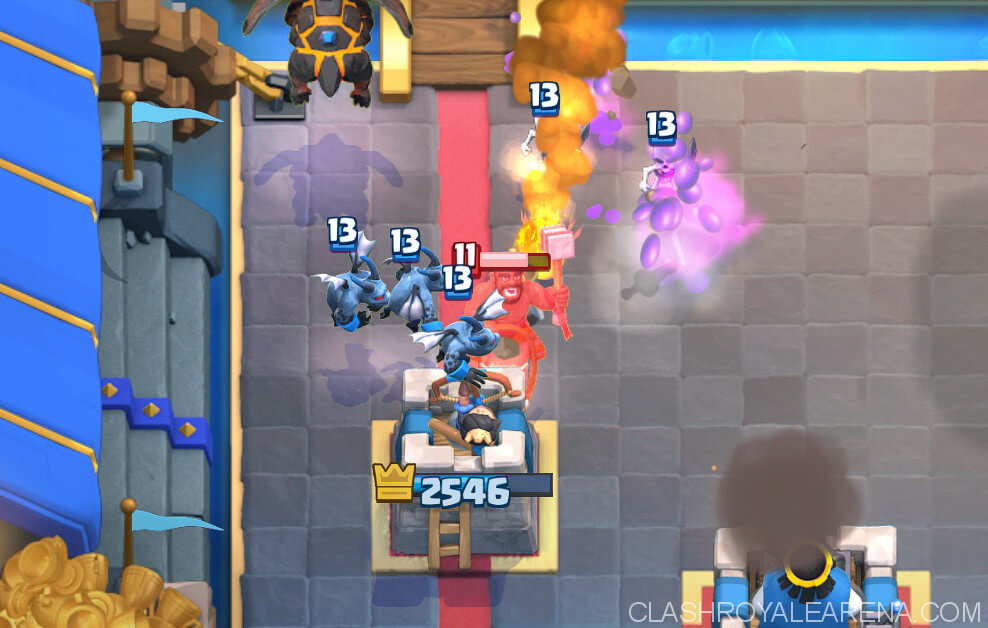 F2P stands for “free-to-play”. It refers to those who don’t spend a lot of money on the game, so roughly 95% of the player base of Clash Royale.

The idea behind this deck is the lack of epics and legendaries, which is important because these cards can be very difficult to upgrade or just to obtain in general.

The players that spend money, usually spend it on getting these cards.

Since this deck is mostly commons with a couple of rares, with early arena cards, they are easy to unlock and receive a lot of.

Using this deck, players won’t have to spend money, hence making it F2P!

Your win condition, or in other words, the card you will use to win the match with most times.

Your goal is to cycle him repeatedly, so you can out-cycle their counters.

After a successful defense, counterpush with him behind a Knight or in front of Archers or Goblin Gang.

99% percent of the time, they will use some card to counter, so hover your Zap or Fireball over the area.

The all-around favorite when it comes to direct damage spells.

If they counter your Hog with any kind of glass cannon or something similar, Fireball it for value/chip damage.

Towards the end, send predictive Fireballs with your Hog to get hundreds of damage in!

This guy is a beast on defense.

Paired with any other card, he’ll stop those ever-hated Elite Barbarians in their tracks.

When they get a monster push going, plop him smack down in the middle of their support and he’ll take care of them easily.

After defending, use him as a tank for your Hog and you’ll be golden. Oh, and he’s only 3 elixir.

Not a lot of players see the value these two pink-haired gals have, also for only 3 elixir

They can pick off swarms and glass cannons easily from a distance, just make sure something is tanking for them!

They also have one of the best starting moves in the game: splitting them in the back!

After sending in your Hog, hover it over area to get rid of any Bats or a Skarmy they might drop.

Don’t waste this card on Inferno Towers, your Hog will still die! Save it for defense in that case.

Ice spirit + Zap kills Minions and Goblins, and if you can, this is the card to overlevel.

Use this happy little guy to cycle, defense, and offense, all for 1 elixir!

Pair with Hog Rider when you can, and he’ll help the Hog get at another hit on the Tower.

On defense, use him to freeze their push just long enough so you can shut it down.

On defense use them to shut down lone glass cannons or rush cards such as Miner, Hog, Elite Barbarians, etc.

If you are defending a large push, use your Knight with them for a good old tank ‘n’ spank.

Drop them at the bridge as a good starting move.

Ever since its buff, this card is honestly such a better option than Inferno Tower.

For less elixir, the Tesla now can deal with swarms easily by one-shotting Minions and Goblins, but has the DPS to shut down Giants and Hogs.

In Double-Elixir, you can sometimes get 2 down, which is a very difficult defense to break! Make sure to protect it however!

Just a heads-up, these substitutions will likely make this deck less F2P friendly, but I include it for the sake of those who don’t have the original cards leveled or unlocked yet.

As said earlier, this deck is a cycle deck, so your objective is to cycle back to your Hog Rider as many times as possible before your opponent can start a large push going.

This means that you should get the most damage in during Single Elixir, and hopefully take a Tower.

Cycle by splitting Archers in the back, Goblins at the bridge, or Ice Spirit at the bridge for a little chip damage.

Instead of finding out what deck they’re playing, find out what win-condition is and what their counters are to yours. Track these cards to know what kind of cards to send with your Hog.

Example: If they have The Log, track this card to make sure you don’t send in Goblins + Ice Spirit + Hog when they have it in hand.

When they do play their win-condition, counter with Knight, Archers, Tesla, Goblins, etc, based off the situation.

After defending, send in your Hog behind a leftover Knight, or in-front of leftover Archers, and whatnot.

Take advantage of your spells!

If they play Minions or Goblins, Zap them anyway, because the stun will help your Hog get an extra hit.

If they play a glass cannon, Fireball it!

In Single Elixir, your opponent shouldn’t be able to make a massive push, but when they do drop a tank in the back, play it like this:

Rush the opposite lane with Hog + Support. If not in hand, quickly cycle to it. Then, play Tesla in the middle, 3 tiles from the river.

Use Knight + Archers to knock out the support, while your Tesla + Tower shred the tank.

If you haven’t taken a tower yet, you gotta play aggressive.

Send in predictive Fireballs, even if they are just going to counter with a Skarmy.

Send in Archers after your Hog to make sure they can’t counterpush.

If you have taken a tower, focus on defense more so.

Send in the occasional Hog on the other tower to pressure, especially if facing beatdown.

When facing beatdown, you don’t want them to build up a massive push.

When they play their tank pressure, but don’t overcommit. Try to get 2 Teslas down, even a Golem can’t deal with that! Kinda just spam defensive cards, just make sure their push doesn’t connect to your tower!

If facing another control deck, don’t worry about pressuring. Just make sure to keep up with their cycle of their win condition, and you’ll be fine.

When they do play their Giant, rush the opposite lane with Hog + Support. Plant your Tesla, and use Knight + Support to take out their Support. Goblins also help with Giant once the support is gone.

After defending, counterpush with your Hog again.

Bam, that’s 2 pushes of yours for every 1 of theirs.

Not as easy as Giant unfortunately.

They likely won’t play Golem before Double Elixir, so try to get in as many Hogs in as you can, because you’ll likely spend the final minute defending.

Fireball their Pumps, or if it’s not in hand, punish hard with Knight + Hog + Ice Spirit.

Basically, get as much damage in as humanly possible before the play their Golem. When they do, it’ll be rough.

Rush with Hog opposite side, make them spend their Elixir.

Use Tesla to pull the Golem and buy time.

Before you worry about the Golem, take out their support with Knight + Everything you got.

Remember to use your Fireball!

The winner of this will be decided by who can cycle faster.

Tesla will be your primary defense against Hog, and if they use Hog + Support, drop your Knight down to take out the support, and counterpush with Hog!

Simply, you’re going to need out-cycle your opponent, so that they can’t always use him on your Hog.

Once the Mega Knight has crossed the bridge, Knight + Ice Spirit can take care of him.

Use Archers to pick off any troops behind him. Use Tesla as needed, just make sure he doesn’t jump on it.

Similar to Golem and Giant, because you don’t want them to build up a massive push!

Go ahead and Fireball their first pump they put down, but if they then drop their 3 Muskies, quickly cycle to another Fireball.

Hit the side with the 2 Musketeers + Tank, and use Goblin Gang if necessary.

Knight on the side with the single Musketeer, and you’ll do just fine.

If they try to bait out your Fireball with Horde, Zap + Archers takes care of them easily.

Tesla can shut down the Ram as well.

See? 3 Muskies is a walk in the park…

Meaning, don’t place Archers or Knight in the back, or send a Goblins + Archers + Ice Spirit + Hog push.

Whether it’s the variation with Tornado or Inferno Tower, you’re going to have to out cycle it.

If they have Tornado, always send your Hog behind a Knight, it can’t be countered by their Tornado.

I also like to save my Zap for their Gang, and use Goblins on the Barrel.

If you can’t out cycle them however, aim for a draw.

They likely have Poison, so use your Goblins on the tank, and place Archers outside of Poison range (hopefully).

If needed, use Knight on GY too.

The quicker you take out their tank, the easier it’ll be to deal with the Graveyard.

Try to make multiple Hog pushes between each of theirs.

When they play their Mortar/X-bow, place your Knight to tank the shots.

Fireball on the support, and drop Archers to pick of the rest.

Siege decks often give lots of opportunities for value Fireballs, so take them!

Rush with your Hog after they’ve used their siege card.

Whoever can cycle faster will win, so make sure that’s you!

You’ve got the Knight, who’d I say is a hard counter to E-barbs. Knight + Any other troop will stop them right in their tracks.

What if you don’t have Knight in hand? That’s alright, drop down Goblins, Ice spirit, Archers, Tesla, etc, just make sure they’re all spread out!

That’s all for today folks! I hope that this deck is the solution to any of you struggling with finding a good F2P deck out there.

Good luck to y’all and I’ll see you in the arena!