Hello everyone, benbo here, today I am bringing you a great countering Hog Deck which can easily take you to Legendary Arena once mastered. I recently got to around 3200 using this deck as a level 9 with level 9 commons, 6 rares and a level 1 Legendary. I recently dropped back down while testing new decks but I can rely on this deck to get me back up! (lol just as I write this I get The Log from a Free Chest!). BTW, I am F2P, pretty lucky with 3 Legendaries)

Push to Legendary Arena with Hog and Ice Wizard

Hog Rider – Main damaging card of this deck, paired with minions and/or other cards as a counter push can easily deal devastating damage to the opponent’s tower. Can also be used to pull troops and distract them for them clutch last second wins!

Minions – Extremely versatile cards for both attacking and defense, paired with the Hog Rider and Zap they form a great attacking combo but can also be used with other cards to quickly take out big threats such as Valkyrie, Hogs, Mini P.E.K.K.A, Royal Giant and Dark Princes.

Valkyrie – Best used on defense to take out swarms of enemies and support troops such as a Wizard behind a Royal Giant. However the Valkyrie can also be used with the Hog once it has finished defending to form a powerful counter push. Try to place the Hog Rider behind the Valkyrie so that it can push the Valk forward whilst being protected by it (read more about this at here)

Zap – A great card that you must know by now! Great for defense with a 1 second stun to take out Goblins, Spear Goblins weakened troops and Minions. Perfect with coupled with the Hog to stun the opponents tower and troops to enable your Hog to get in a few extra hits.

Fireball/Poison – Both used to take out hordes of troops such as Barbs, Minion Horde, and supporting troops such as Musketeer and Wizard. I have tried both in this deck and both have their own advantages but I do prefer the Fireball in this instance. Poison is great for attacking with the Hog Rider as it slows down troops however despite this and its wider lasting radius I find the Poison weaker on defense and has lost me some crucial games as it takes too long to kill. Fireball however doesn’t have this problem dealing instant damage.

Tesla/Cannon – I have again tried both but prefer the Tesla due to its longer lifetime, greater damage and its air defense as this deck is somewhat weak to air. The Tesla can be used to take out Royal Giants, Giants, Hogs and general defense. When coupled with the Ice wizard this can take out big pushes.

Mini P.E.K.K.A – A great card or both offense and defense with a high damage output. Can also be used with the hog rider as a counter push to form a massive combo.  However I wouldn’t usually use the Mini P.E.K.K.A as attacking on its own I usually save it for defense only as when coupled with other cards such as the Zap and Tesla the Mini P.E.K.K.A can shut down many strong pushes.

Ice Wizard – The Ice Wizard is one of the best defenses in the game its slows down enemy troops and buys you extra time for only 3 Elixir! I often place him by the side of the tower keeping him out of the way while he slows down the enemy push. Again he is best used in defense with cards like the Mini P.E.K.K.A and Tesla. (Could replace with Ice Spirit, Fire Spirits or Goblins)

It is best if start out with a push with the Hog to see what your opponent has to counter it. If not I would wait out for the opponents move and go on from there. If they place down a big elixir troop such as Golem, then push the other lane hard, with your Hog/Minions/Zap.

I usually defend most of the game then make a big counter push with the Hog Rider when your opponent is down on elixir. Try to defend your opponents pushes with as little Elixir as possible this gives you a massive elixir advantage enabling you to make a massive push towards the tower.

Here I defend against a Golem. First I zap to get rid of goblins and weaken the minions. I pull the Golem with the Tesla and place my ice wizard to take out the weakened minions once it takes care of them it turns to the Golem where I place my Mini P.E.K.K.A to take Golem and his Mini P.E.K.K.A out. I ended up taking very minimal damage and got 1 hit with my Mini P.E.K.K>A onto his tower. 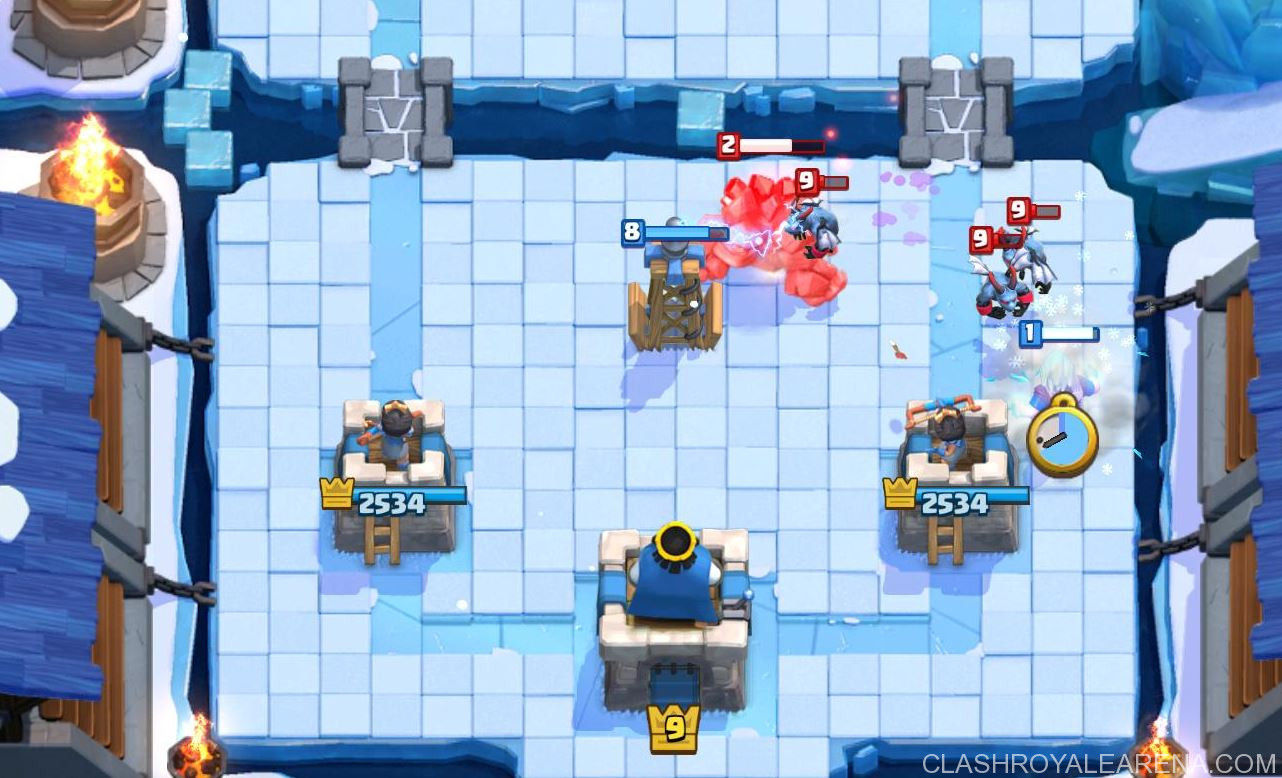 Here is an easy defend against a Royal Giant. Tesla to distract and Mini P.E.K.K.A to deal the big damage. Although he spent 6 Elixir on the Royal Giant and I spent 8 on the defend he had to deal with my full health Mini P.E.K.K.A with Fire Spirits and Zap. So he spent 10 elixir in total and also wasted his Fire Spirits and Zap which I later capitalized on by sending in a Hog and Minions. 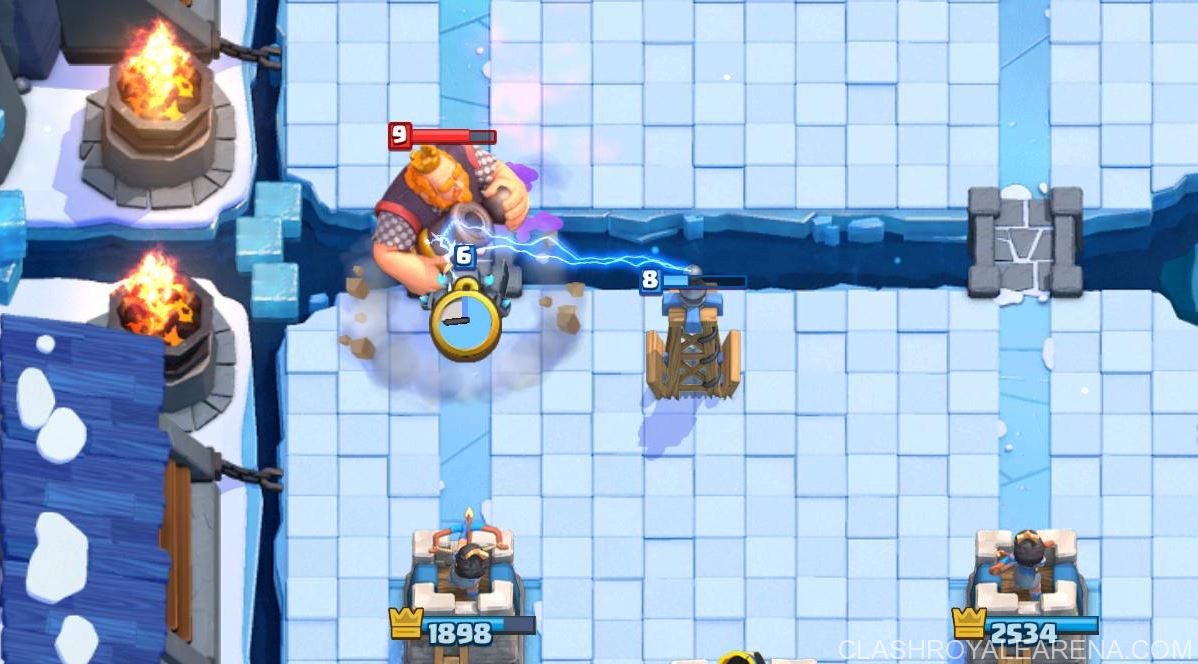 Here is another easy defend against a Sparky, I Zap then use Minions to take it out and also form a counter push with the Hog Rider to do some damage to his tower. 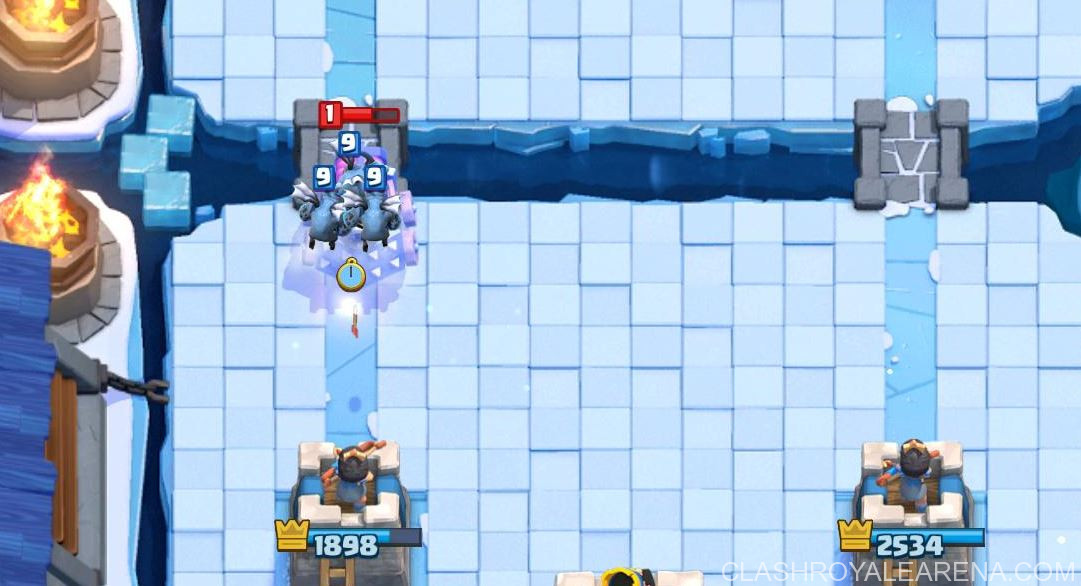 Using the Valkyrie to defend is essential. Here I have a strong push coming at me with a P.E.K.K.A and Wizard to support. As the Valk is so tanky it survives two P.E.K.K.A hits and brings the Wizard down to a slither of health, while the P.E.K.K.A is targeting my Valk I put down a mini P.E.K.K.A to start to chip away the big P.E.K.K.As health bar. The P.E.K.K.A takes out the <ini P.E.K.K.A then targets the Tesla, I zap and take out the wizard and P.E.K.K.A. I successfully defended a big push without taking any damage to my tower. I also use the same amount of elixir as he does as he also Zaps during the attack.

That’s the end of my In depth guide to my favorite deck currently in Clash Royale! Thanks for reading! Hope you can reach Legendary Arena too! 🙂