Hello to all of my chums on CRA! Supermarine here with a surprising Hog Rider Heal deck! 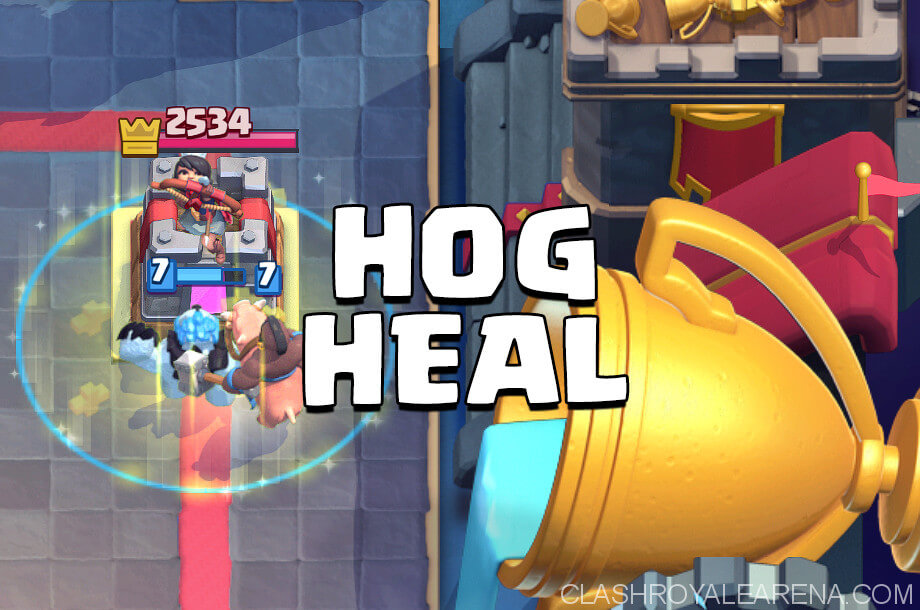 Let me tell you a story

I was working on an amazing guide for a P.E.K.K.A Graveyard Bridge Spam Deck that I intend to use in my third Hybrid Horrors (spoiler alert!), when I got an e-mail from my friend Dragon Claw. He told me that there was this amazing Hog deck that he had just used to get to Challenger II.

At first, I wasn’t impressed, as there are a TON of Hog decks in Challenger I and II. But then, he says something that immediately changed my mind: It featured the Heal Spell!

I wanted to see people in CRA give Heal some love, so I eventually decided to try and get Dragon Claw’s deck posted! And here it is!

He is your mini-tank. For 2 Elixir, he is very versatile, kiting tanks, killing Skarmy and Bats, and combined with your spells can kill Goblins, Minion Horde or even Barbarians!

He also works great as a distraction for tanks like Giant Skeleton, P.E.K.K.A, and Mega Knight.

Overall, this bad boy is is a more than welcome card to have in any Hog deck!

We all know that he is a win condition, of course, but you can also use him (if you macro properly) to take out pesky Elixir Collectors placed in the anti-Rocket position!

Bet you didn’t know that!

With delicately coiffed hair, an extremely lethal boomstick, and an incentive to do every single thing on her bucket list, the Musketeer is a great ranged attacker and support unit for Hog Rider.

She helps Hog take out those pesky structures such as Tombstones and Inferno Towers to make his day easier.

She also makes ExeNado less of a threat (the Hog will still be soaking damage for the Musketeer even when Tornadoed).

Her high DPS (at 1.1 secs, better than eWiz) is also useful for defense, as it kills both types of Dragons, along with mini tanks and threats such as Bandit or Night Witch. Even Balloon and Graveyard stand no chance!

This is probably the most unconventional spell (apart from Clone) that you will ever see in a Hog deck. But, on another note, IT ACTUALLY WORKS!!!

Yes, you heard me correctly. Heal is seeing some love here in CRA!

Anyway, Heal is a great card because it makes dangerous threat cards even more of a threat.

That Musketeer that just got Fireballed can get healed up, making her usable on offense.

Heal can also mean the difference between a 250 health Arena Tower and a downed Arena Tower, all because your Hog got healed, allowing him to get one last swing off!

Overall, Heal can be used to great effect to help troops recover after big hits, but it can make for a really deadly clutch card!

He can be used for cheap cycle, support, value resets, and positive Elixir trades! Mostly self explanatory.

We all know that Musketeer can be great for killing stuff like Knight, Bandit, and even Giant, but what happens when there’s a bigger, tougher tank lumbering towards your Tower?

That’s where this fiery building comes into play!

It is a tank melter, able to tackle the biggest and strongest! Just be sure to protect it if it gets Zapped at by using your Ice Spirit to maximize its potential.

Resets charging cards, kills swarms, and also your prime spell to use against Barrels and Graveyard.

So, do I really need to say more?

This thing is great for hurting glass cannons or Barbarians that may be attacking your Hog.

Although, it’s not gonna kill them (unless you’re one of those guys who overlevels their Fireball massively).

That’s why you’re gonna need a Zap or the Ice Golem’s Death Damage to finish the job.

Also useful against Pumps and Barrels (though it’s not the best option).

Always start off strong and aggressive, since this is a cheap Hog Deck. This puts pressure on your opponent.

On defense, use your Musketeer and Ice Spirit to kill small troops, and Inferno a Tower to kill big ones.

Also be sure to Heal troops if they’ve taken big hits to maximize damage done to the Tower.

Defend with your Musketeer and Inferno Tower, use Zap to reset opposing Inferno or clear swarms, and Ice Golem to finish off tough swarms.

On defense, it’s very wise to use your Ice Spirit to freeze foes if necessary, as it buys more time for the Arena Tower to take them out.

Inferno Tower and Musketeer work great against this guy.

Be sure to distract support with Ice Golem or Ice Spirit wherever necessary.

A word of warning: Be VERY careful of Lightning.

If you place the Inferno Tower and the Musketeer too close to the Tower or each other, you could be giving the Lightning massive value!

What you need to do is spread out the Arena Tower, Inferno Tower, and Musketeer so the Lightning cannot hit them all.

Also use Ice Spirit to bring out the full value of the Inferno, and Ice Golem to distract support and get slows in.

Obviously you will need the Inferno Tower. If it gets spelled at, use Ice Spirit.

Also be sure to use the Ice Golem to distract support.

Use Musketeer to kill any secondary win conditions behind P.E.K.K.A.

Punish hard with Hog and Ice Golem, as it will force them to use up all their Elixir on defense, or sacrifice a Tower to build a push.

Against Hound, use Inferno Tower along with Musketeer on anything behind it, like Balloon.

Like with Golem, be very aware to spread out all the defenses if they are using a Lava Deck with Lightning, like LavaLoon Lightning.

Inferno Tower and Musketeer work great against him.

Kite any Elite Retards with Ice Golem. Use Ice Spirit to freeze if necessary.

Inferno Tower works especially well, mainly because there is no ground swarm in the deck.

Keep it in cycle, or use Ice Spirit+Musketeer to kill him, and then establish a counterpush with Hog if possible.

Fireball alone is good for defense against them.

If the opponent placed them to defend, however, Zap+Fireball is good as it will kill them!

Ice Golem works great to soak damage from the Skellies and get Death Damage in.

Musketeer, with her high attack speed, is also a good option to pick off the Skeletons as well.

If a reactive Poison is placed on the Tower and Musketeer dies, Zap the remaining Skeletons and make a counterpush.

You can use Hog Rider, Musketeer and Inferno Tower against Siege structures.

If using Inferno Tower, be very careful of cards that can reset its charge.

With Hog and Musketeer, you always want to establish a counterpush.

Musketeer and Ice Spirit are awesome against Miner Poison pushes.

Against lone Miners, you have no ground swarm to deal with him, so use the Ice Golem to slowly (but surely) push him away from the Tower.

If he retargets onto the Tower, use Ice Spirit to freeze.

Zap is your prime attack for Barrels.

Use Musketeer on Princess, and Ice Spirit on the Gang.

Use your Fireball if necessary, and watch out for the Inferno Tower!

Also, if they fire their Rocket, that is your chance to punish them hard and get major damage done!

Overall, if played properly, this deck is a big threat to the Bait archetype.

You have one of two options: Inferno Tower or the King activation.

Inferno Tower is the easier option, but a King activation will help out big time in the long run.

When going for a King activation, use the Ice Golem to make him jump to the middle of your side of the Arena, then place Ice Spirit in front of the King Tower. If all goes well, your King will be engaged!

So that’s all for this great deck guide!

Sorry about Hybrid Horrors, it will be coming soon! I can promise you that!

See you guys next time! 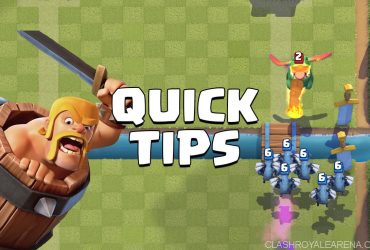 Hey guys! Extamyte here with another guide. Today, of course, we are gonna talk about the topic new players always ask: “How to be a better player at Clash Royale?” … 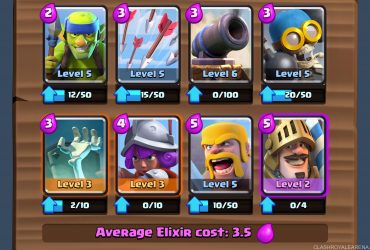 This Clash Royale Arena 5 Deck is working very well for me as especially for all free-to-play players since you just need Arena 3 cards and below. This deck was …