Hey guys! Supermarine here, and today I am showing you guys a Hog ExeNado deck that finally got me to 4K trophies!

This deck is solid on both offense and defense, with the capability to create deadly pushes and at the same time have massive push stopping power!

So, without further delay, we now get into the guide! 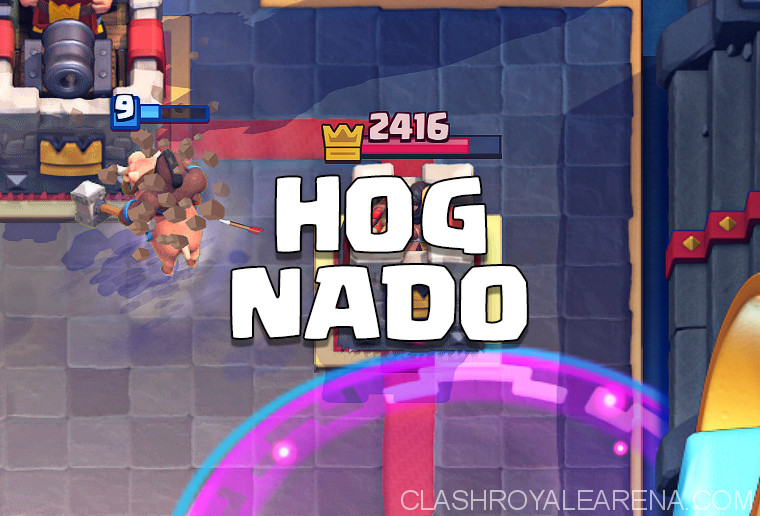 This savage hunk of ice is one of the most useful utility cards one can have, as it opens up opportunities for so many things!

It can allow you to kill Horde or Gang with Zap, and it also allows you to kite deadly troops away from the Arena Towers or win conditions.

He can even help you to preserve Zap by killing Bats or Skellies for you!

And the best part is, he only costs 2 Elixir!

This guy is a master of crowd control, and he is deadly when paired with you Ice Golem, Hog, and Tornado.

Capable of taking on any swarm or horde, he can take them all out with one throw!

Be careful though, as he is 5 Elixir.

If used poorly, your Arena Tower will pay for your error!

It’s used with Executioner for crowd control, and also moves troops to the King and away from the win conditions.

However, Tornado is also quite a high risk card as well.

If you screw up, you’ll be down 3 Elixir and in big time trouble!

Melts the likes of every tank, including Lava Hound, Balloon, Giant, Mega Knight, and more!

Don’t use it on mini tanks like Battle Ram though, otherwise you’ll just be wasting valuable Elixir.

Mini P.E.K.K.A: This is what you should use on deadly threat cards such as Valkyrie, Elite Retards, and Battle Ram.

Even Giant, Mega Knight, and Magic Archer have issues against the Pancake Hero!

His high damage per hit allows you to shred through just about any mini tank, and can also be used as a emergency defense against Golem and other big tanks if the Inferno Tower is compromised.

However, sometimes you can use this guy on the counterpush as well after defending a push, and paired with Ice Golem, Hog, and Zap, you can create a really deadly push!

Also can be used to kill Goblin Gang, Goblins, and Minion Horde when paired with Ice Golem.

This is a great medium damage spell to have in Hog ExeNado because it absolutely annihilates glass cannons, preventing them from doing anything to pose a threat to your Tower.

Can also kill Minion Horde for a positive trade and Barbarians if paired with Zap.

Be careful, though! Like Executioner and Tornado, this card’s a risky one to play in some situations, and one misfire could cost you, on offense or on defense!

Make sure you get some cheap Hog pushes in so that way your opponent won’t have the time or Elixir to attack properly.

If the opponent does manage to get in an attack, you have Tornado, Mini P.E.K.K.A, and Inferno Tower to help in defense.

Executioner also helps, and it is always recommended to start a counterpush with him during this time unless he is at low health.

This is when the Hog pushes go from normal to crazy.

Most should contain Executioner and Tornado to maximize the safety of the Hog.

Also be sure to save Mini P.E.K.K.A for defense, then make an Executioner+Hog Rider counterpush.

Use Zap and Fireball, or ExeNado on any swarms that need clearing.

Just use Inferno Tower or Mini P.E.K.K.A. Use Zap to help divert support units away, then counterpush with the Hog.

You have Fireball for their Pump, along with two tank killers.

If one is compromised (for example, Inferno Tower gets hit by Lightning), then use the other.

If you have a Hog in hand and they place Golem in the back, use this opportunity to take their Tower while they are depleted of Elixir.

Unlike Giant and Golem, P.E.K.K.A Decks render your Mini P.E.K.K.A as useless against her.

This is why you should use Inferno Tower on the P.E.K.K.A, then use MP on the support or secondary win condition.

Use Tornado if necessary to move P.E.K.K.A away.

If they place her in the back and you have a Hog in hand, punish hard, similar to how you would punish a Golem user.

Just use your Inferno Tower and Executioner.

If they place anything behind the Hound, then use Tornado to pull it in to the Executioner axe.

Also, if they have Lightning, Executioner won’t die to it!

Against Minion Horde, use Fireball or Executioner, and versus Ebarbs, use Mini P.E.K.K.A.

You have three hard counters to him in the form of Inferno Tower, MP, and Tornado, which is the best option versus Hog Lightning and other light pushes.

What could go wrong?

Use Fireball on the side with two.

Then use Ice Golem to distract the one, and use MP on any mini tanks.

Use Ice Golem to distract all of the Skeletons, or use Executioner to kill them all.

Also, don’t worry about a Poison, your troops will survive.

If they use Freeze, be careful and don’t overcommit by Fireballing. Instead, use Zap+Ice Golem so you can save your Fireball for tougher troops.

Use Inferno Tower, Mini P.E.K.K.A or Hog (doing that is not advised).

Use Fireball or Ice Golem if necessary.

When Poison isn’t used, you don’t have any good Counters to Miner you can use without getting an Elixir disadvantage.

Miner+Poison pushes can easily be countered by Mini P.E.K.K.A, however.

Also be careful of any big tanks paired with Miner. In this case, do NOT use MP on the tank (use him on Miner) as this will allow Miner to get massive damage if you don’t counter the tank fast enough.

Use Tornado or Zap on the Barrels, and Fireball everything else.

However, your main problem will be the Princess, as you can’t counter her without attaining an Elixir disadvantage, unless you use Tornado.

Also, if they fire their Rocket and you can’t properly punish, you’re in big trouble!

You should be able to treat the MK like a Giant and get away with it.

This means that you can use Inferno Tower on it without penalty, then use Ice Golem to distract support.

Use Mini P.E.K.K.A if the Inferno gets reset.

So that’s all for this amazing deck guide!

Leave a comment op if you guys enjoyed, or have some feedback you want to give me!

My new deck series (possibly a collab) is COMING SOON!