Wassup Guys! It’s DabMaster2 here back at it again with another deck guide for you guys.

Today, I’ll be showing you the Hog Double Wiz Anti-Meta Deck. This is a solid deck which can easily counter the meat decks – Spell Bait, Giant Poison, etc.

This deck uses two wizards for splash damage and the barb hut as a defense because it has so much health and pressures opponents. Together, these cards make perfect shut downs of pushes.

Without further ado, here is my deck guide: 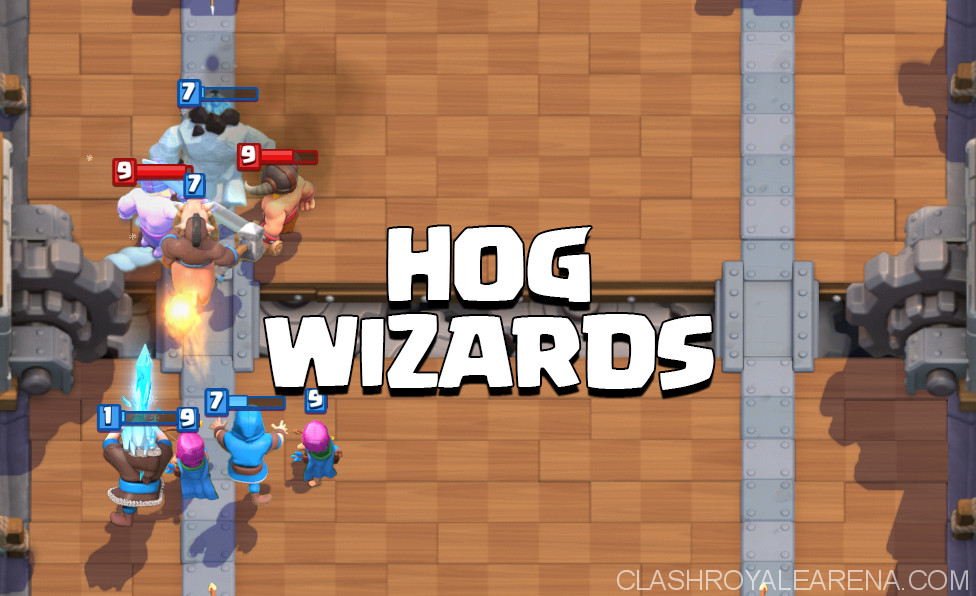 Hog Rider – He is my favorite win condition because he charges fast at the tower, has good health, and good damage. You can pair him with any troop in this deck to strong push. Do a Hog push when your opponent has low elixir or has used their counters. Always have a Zap ready for a skeleton army.

Barbarian Hut – Why the Barbarian Hut? This isn’t being used much right now, but it has lots of potential. It has so much health, it can sHut down an incoming Hog and continue spawning barbarians. This building forces opponents to answer the incoming barbarians or deal with massive chip damage therefore pressuring opponents constantly and forcing them to spend elixir constantly.

Ice Wizard – IMO he is the best defensive troop. He slows down troops so much which lets your troops have more time to take down enemy tanks and such. On offense, he will slow down troops allowing your Hog more hits on the enemy tower.

Archers – These little ladies are strong support cards. They are just overall a great card to have in your deck. They can deal decent DPS on offense and defense and are a nice and cheap counter to many cards.

Ice Golem – A great mini-tank. Use him to distract and kite away enemy troops. When attacking, he will soak up tons of damage to protect your Hog Rider and other troops behind him. Due to his frost nova having a reduced range, he won’t be as good at taking down skeleton armies which is why the Wizards are behind to clean things up. Read more about the Ice Golem here.

Fireball – This should be self-explanatory. Use it to Use it to take out clusters of medium health troops for a positive elixir trade. One good tip to learn with the Fireball is this: Don’t use it until your opponent has their whole push or at least almost their whole push down. If your Fireball too early on a single troop, your opponent can clump up all his troops knowing that you have used up your Fireball.

Zap – Also self-explanatory. Just be smart when using it.

*Note: Not all the substitutions are as good as the original

At the start (0:00 – 0:30), you will want to play slow and defend your opponent’s beginning attacks. Don’t overcommit especially now in the beginning because your opponent can easily punish you with a counter-push. Here are your beginning plays:

Once mid game arrives (0:31 – 1:59), you should know by now your opponent’s counters and win conditions. There are two different playstyles to use with this deck: Control Counter-Push and Double Lane Beatdown. I suggest you learn both to counter your opponent’s defense well.

These are your main combos:

*These are barbarians coming from the barb Hut

In double elixir, you are now able to make stronger attacks and attack more frequently. Always have a Barbarian Hut placed down for defense and to constantly pressure your opponent. Whenever you finish defending, Immediately counter-push. If you can reach the tower, you should be able to chip it away slowly, but surely. When you have, a big push going, try stacking up as many troops as possible if you know your opponent doesn’t have a Fireball in rotation. Otherwise, double lane attack him

Giant/Golem Lightning Decks – Always have a barb Hut down. It will provide amazing defensive capabilities if you have it up. Make sure you don’t have your Wizards placed in between the barb Hut and the tower because that will make good lightning spell for your opponent. Have a Fireball ready to decimate their support troops and immediately counter-push if you have the elixir left.

Zap Bait Decks – This should be easy to play against. You have two Wizards to deal with incoming swarms. Remember to save your Zap spell specifically for the goblin barrel to avoid major chip damage.

Lavaloon – Have your Barbarian Hut down always to distract their Lava Hound and Balloon. With your two Wizards, the Ice Wizard will slow the troops down while the Wizard will splash on to every troop. Also, have your Archers just in case to help.

X-bow/Mortar Decks – The Barbarian Hut will be able to take the bulk of the damage from the x-bow. Use your Wizards and Hog Rider to take it down and counter-push. Some x-bow decks have the rocket though, so place your barb Hut away from the tower to avoid them both being hit at the same time.

Hog Decks – The barb Hut alone will take down the Hog easily. Don’t be afraid to take extra damage to it since it has a lot of health. Once again, counter-push his Hog pushes.

This a solid deck which counter the meta well. Having a barb Hut and two Wizards can stop almost any push. With this deck having two different offensive plays, it makes this deck very versatile. Defend all your opponent’s attacks then counter-push. If you can defend your opponent’s pushes, you can win.

Don’t forget my 3 don’ts of Clash Royale: Don’t over commit, don’t waste elixir, and don’t get upset. If you follow the 3 Don’ts, it is one more step to becoming a better Clash Royale Player.