Hey guys, RohanReigns here and this time I will be taking about Hog Cycle decks and how to use them, along with some popular decks.

Before getting into the topic, I would like to thank Blaze Stone and Golem FTW (Radius) for being my inspiration to write this Ultimate Guide! 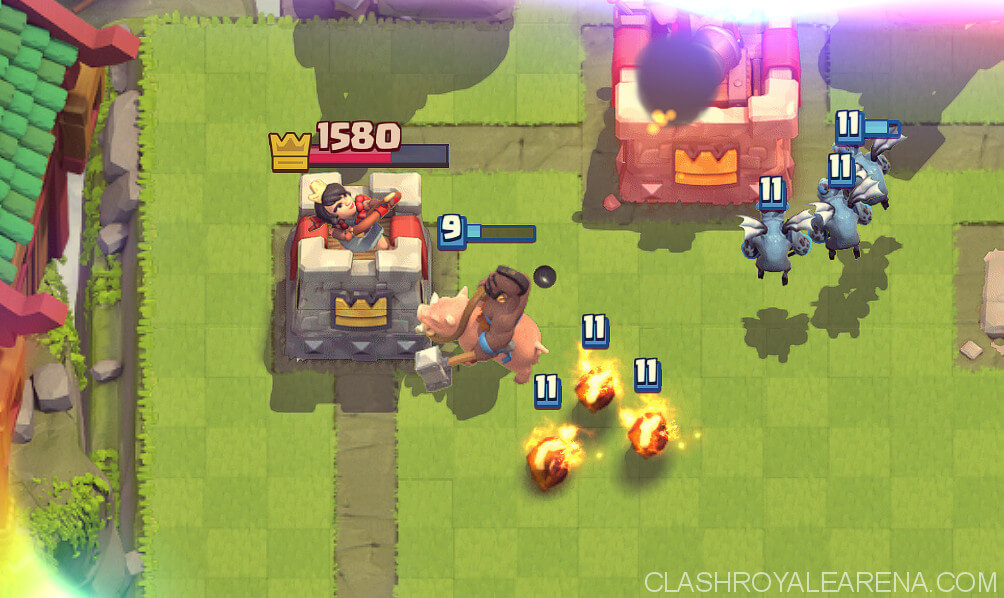 Hog Cycle In A Nutshell

Hog Rider has always been in the meta and so many varieties of decks are made with Hog Rider.

Hog Cycle decks are the most popular ones and are considered to be the most rewarding if played correctly.

They are decks with Average Elixir Cost ranging from 2.6 to 3.3, which utilizes Hog Rider as it’s main win condition. They contain one or two cycling cards in order to bring back Hog Cycle into rotation so that the opponents can be caught off guard.

Basically Hog Cycle players have expertise on art of outcycling their opponent’s counters to Hog Rider.

These decks usually have one medium or heavy spell which are used offensively to connect the Hog Rider to the towers.

Such decks are not made to form a huge “push” and contrary to beatdown decks, several mini pushes are made rather than a single huge push along with sound defense. A Hit or two per hog deployment is considered okay as long as you’re not getting any sort of Elixir Disadvantage.

The medium/heavy spells are also taken as win condition specifically in Double Elixir Time. That’s because it’s always hard for your Hog Rider to reach their towers since your opponent can cycle to his Hog counters pretty quickly.

Moreover, Hog-Cycle decks are known for creating a uniform pressure upon the opponent in a specific lane, thus not allowing him to form a huge synergetic push.

Versus beat down decks, it’s always advised to attack the opposite lane to force them either to support their tank or defend your push. Due to this pressure-creating principle, hog-cycle decks are decent against beatdown decks and a bit weak against control decks.

You can read the Triangle Theory here.

You can compare any Hog Cycle deck with this slotting method or even make your own!

Cycle decks only have one plan – cycling to the main win condition quickly than the opponent so to catch them off guard or make them over commit in defending.

Hog cycle decks have always been in the meta due to the fact that they are consistent, fast and can counter any decks if mastered well.

Talking about the mindset while playing Hog cycle, it’s all about inspection and aggression. The former one means to know your opponent’s Hog counters, generally done during the game’s first minutes. The latter one refers to constantly attacking your opponent, outcycling their Hog counters and creating pressure upon them so that they can’t attack. This part is done in Double Elixir Time, where you have that pinkish liquid replenishing at good rapidity (:p).

While the terms “Mindset” and “Gameplan” are a bit similar, they have a slight but major difference between them.

Mindset is what you think and how you behave while playing and gameplan is all about that strategy or the “execution” thing , that you perform during the game.

Your gameplan while playing witha Hog Cycle deck can be divided into two sections:

It lasts from 3:00 to 1:00 and this is when you need to know your opponent’s hog counters. This is done by doing some light pushes with your hog rider while defending perfectly on your part.

As a starting hand, you can do the following moves:

Always let your opponent do that first push because:

During this phase, it’s advised not to use your Heavy spell such as Lightning offensively unless you get a really good value. You have to make good elixir trades during this time so that you can pressurize them later on. If you’re getting one hit per one hog deployment, that’s awesome!

So to wrap everything, you main gameplan during 1x Elixir will be to track their counters to your Hog, defend properly and assess their deck archetype and make as much positive elixir trades as possible. Counterpushing is vital during this phase.

During this phase, you main gameplan will be to constantly attack them by cycling to your hog quickly. This disallows them to initiate their push since they have two options to choose, either to support their push or defend your push.

Now you don’t need to care about Elixir Trades, get as aggressive as you can while keeping your defending cards ready.

You need to take down their tower in any possible manner, especially against Golem and 3M decks.

Sometimes outcycling is not possible against decks with cycling speed as that of yours and you can’t connect your Hog to their towers. In those cases, switch into defensive mode and use both of your spells on their towers to slowly demolish them. While doing that make sure to not allow them to build up their death ball push and this can be done by sending a lone Hog Rider in the opposite lane

Keeping your support spells is very important, especially when they counter with swarms.

Which lane to attack?

Well, this depends upon the deck you’re playing against. The list below can help you:

Before 2x Elixir, you can actually switch lanes as well in some situations.

For example, your opponent places a Collector and you go for a Hog+Lightning. Now he will surely place his tank (Golem or Lava Hound ) at the same lane where you did that push earlier. In that case, feel free to attack the opposite lane because even if they take out your one tower, it will be easier for you to take their second tower due to the damage you did.

You should punish your opponent in the opposite lane, if they overcommit in offence with a Hog+Tank combo accompanied with spells.

Beatdown decks: Should be a easy/medium matchup depending upon the card levels and deck you have and use.

Hog cycle decks rely on principle called “Defense through offense” meaning that you shouldn’t let them support their tanks by pushing in the opposite lane.

By pushing in the opposite lane, you force them to use their support troops for defending and once their tank reaches the bridge, just a tornado or cannon can take care of them.

Control Decks: Should be a medium matchup.

Control decks may be problematic since they have very strong defense which won’t let your hog pass through.

So against such decks, your spells are your best companions to take down their tower. Once you’ve got one tower, you can switch into full defensive mood as because control decks , especially miner control decks have difficulty in taking down a tower.

Play defensively and don’t let them counterpush, instead make them attack aggresively so that you can defend them properly and then sneak in a hog in the opposite lane.

Siege Decks: Hog Cycle decks have always been a fair matchup against Siege decks, the win rates are 50%.

Since both players can cycle fast, it depends upon who is more skilled at outcycling opponent’s main win condition and defensive card.

Normally, you will use your Hog for their siege weapon but in case they counter it with Inferno every time, you should use Knight+Musk or Knight+Exe in exact timing and with proper placement.

Cycle your spells and use it to hit multiple units+tower if possible. Spells are your secondary win condition against such decks.

If nothing works, play for a draw.

Let them go aggressive so that you can defend and counter push when they have nothing to defend.

Use your spells effectively and don’t let any of their troops to cross the bridge and tank for GY.

So here’s the end of this fairly long guide. Let me know your feedbacks in the comment section below.

If I’m wrong at any point or have missed anything, comment down below.

I’ll be writing my next guide soon, till then goodbye, clash on!