Hello again, this is Victorapple with a new and interesting off-meta deck perfect for Arena 8 or higher! After getting bored with my old deck, I decided to make a new deck that utilizes an under-used card. 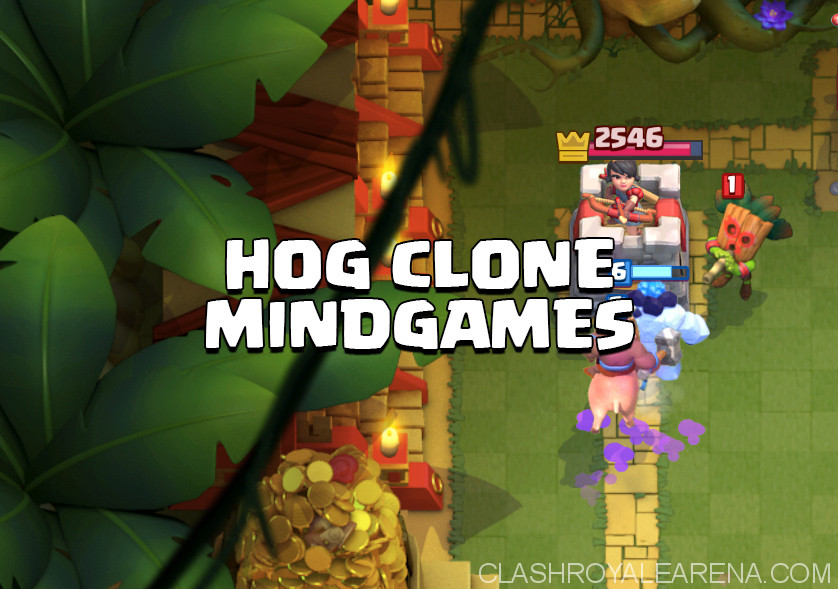 The Clone Spell doesn’t see much usage in higher Arenas, so when people see you use it they will certainly be surprised!

This deck may be hard to play at first, even I lost several trophies trying to get the combos off but once you master it you’ll definitely make your opponent rage for sure!

This deck contains 2 legendaries, Princess and Log. I’ll admit I’m slightly biased and put these cards in all my decks because they are my best legendaries, so subbing them out based on your needs is perfectly fine! ^-^

Hog Rider: The main win condition of this deck. Extremely fast, extremely powerful, this has always been a great card and can do quite a lot of damage if left unattended. This card is going to be one of your targets for the Clone Spell! Reminds me of the days when Hog Mirror was the meta. Support your Hog Rider with the Ice Golem in pushes, but not all of them! (More on this later ^-^)

Ice Golem: Such a great mini-tank for 2 Elixir. This is by far my favorite card, and it might even be more versatile than Zap. Kite enemy troops, distract enemy troops, tank for your troops, and take out Skeletons with it! Yet again, this card is another target for your Clone Spell! Unlike Hog Rider, we don’t really want to protect this clone from damage, as its power comes from its area slow upon death! Don’t ever clone a single Ice Golem by itself, as it is never worth anything Cloning a troop that’s less than 2 elixir, so its best to clone it with other troops around or as a last ditch defense.

Clone: We finally get to the core card of this deck: The Clone Spell! I’m saving all the surprising Mindgame Combos for last, so only a brief overview here. The Clone Spell has an extremely low use-rate at top Arenas, because a simple Zap or Log can just clear all the Clones. Other decks that use clone center it around troops that have beneficial effects upon dying, like Giant Skeleton or Lava Hound. In our case we use the clone to allow double pressure on both lanes! (More on this later ^-^)

I strongly recommend you take a look at this guide for the advanced Clone tips!

Mega Minion: The Meta Minion is your go-to for air defense and for taking out pesky supporting troops. Still a top-used card despite its nerf, it’s still great for stopping ground troops like Hog Rider or Valkyrie as well as air troops. This is not a priority target for Clone, but its always good if it’s in range of Clone when you cast it on your other troops. Sometimes I switch it out for Musketeer or Electro Wizard, but Mega Minion helps maintain the low elixir cost. To be honest, I am planning to switch this card for Dart Goblin once it comes out, for a better defense against Graveyards and for Arrow/Log Baiting.

Inferno Tower: Another core card in defense. Shuts down Royal Giants and Lavahounds alike. Also good for quickly stopping Hog Riders or even Elite Barbarians. An important thing to know is that this is also a great card for baiting opponent spells. Much like a Zap-Bait Deck, it is important to manage what spells your opponent has to counter your cards as a simple Zap or Fireball can clear your pushes in an instant!

Skeleton Army: Another core card for defense. Larry and his buds will help you take out Elite Barbarians and other Single Target troops. Another Spell Baiter for your deck, too. This is also an interesting target for your Clone, if they don’t have anything available to stop them, a quick Clone can desimate an enemy Tower.

Princess: Princess is my favorite Legendary. Extremely versatile and fits in all decks as a back-line support troop. Being the only troop that can target Towers without retaliation, if left alone it will do serious damage to enemy Arena Towers. As another Arrow/Log bait, she helps your main Clone Hog pushes while being dead! When alive, even better! With the Clone, you also can apply double pressure on both sides of the map! (More on this later ^-^)

Log: My other favorite Legendary card. Take out Skele Armys, Princess, Archers, and other things that can pose a threat to your troops. It’s knockback is a very helpful feature, and can be a game-changer. Your gonna have to get good at Log-Prediction if you want to protect your Clones, which is why this deck is hard.

Here is where all the fun is at!

At the beginning of the match, you will want to defend opponent pushes by aggressively pushing of your own.

This will force your opponent to use Elixir to defend your Hog push, which in turn means they won’t be able to support their big push, and you can easily defend it with Inferno Tower or Mega Minion. You can then counterpush with remaining troops.

Out-cycle your opponent for early game pressure, after all, a good offense is the best defense.

At Double Elixir there really is no difference for this deck, just bigger and better pushes and more cycling. However, at this point, your deck should cycle fast enough to be able to pull off a Double Ice Golem Hog Rider Ultimate Push! (More on this later ^-^) The goal is to stay on the offensive, out-cycle your opponent so that they will never be able to build up for a big push.

Finally time for the amazing Combos with Clone that will trick and confuse your opponent for eternity!

Ice Golem Hog Rider Clone 1: This combo is all in the same lane. Plop Ice Golem in front of Hog Rider, then Clone! Simple as that. Be sure their Zap or Arrows or Log is used before doing this, otherwise stick with a simple Ice Golem + Hog Rider push.

Ice Golem Hog Rider Clone 2: This is more tricky to pull off, but will create mindgames for your opponent! Start by placing an Ice Golem in the back or in front of your King Tower on the RIGHT side.

Place it where it is very close to the middle of the Arena, similar to where you would place Archers to split them.

Once ready, place a Hog Rider in the back or in front of your King Tower on the LEFT side, like how you would split Archers.

Remember, an Ice Golem has been prematurely placed to tank for the Clone! Both Hog Riders will still do full damage, forcing your opponent to defend both lanes.

During Double Elixir, it is possible to cycle fast enough to allow you to put down another Ice Golem in front of the Non-Cloned Hog Rider!

This is my favorite Combo to pull off, doing it for the first time in a match will certainly catch your opponent off guard!

Place a Hog Rider on the far left side, then a quick Clone. This will force the Non-Cloned Hog Rider to jump over the River, allowing that one to bypass buildings.

A quick Princess in the back, quick Clone, and suddenly you have two Princesses marching down opposite lanes, forcing your opponent to deal with both.

This is a bit risky, but will create trouble for your opponent. In my experience often times people simply counter this by splitting Archers, so be careful.

The key for pulling off most of these combos is to quickly cast Clone while the Troop is still being deployed.

Too late, and both the Clone and the Non-Clone will travel down the same lane.

Doing that with the Princess is even more devastating than if you failed it with Hog Rider, as a simple Log will take out both.

Sometimes its also better to save Clone for defense, to make more Skeletons before your opponent can Zap them, as the Zap radius won’t be big enough.

Predicting Logs are also important, as an Ice Golem + Cloned Hog Rider can be taken down easily by simply taking down the Cloned Hog Rider surrounding them with Skeleton Army. Because Cloned troops always spawn to the right of the real troop, when you split push it is more predictable for your opponent.

Thank you for reading my guide! It might take some time to get used to this deck, as it requires quick fingers to work the Combos. As always, adjust cards based on your preferences. 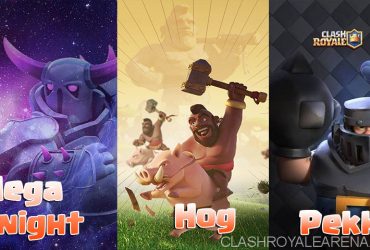 What’s up guys, this is MacTavish with my first guide on ClashRoyaleArena! I have been longing to write a few deck guides and here I am with my first one …