Hello, people of CRA. I am TheClanMan.

Today I would like to introduce you to an extremely new, and strange, but powerful, hybrid deck. It includes the Cannon Cart, one of the most underrated cards in Clash Royale (probably the most if Tesla, and Sparky didn’t exist), and the speedy man with the mallet in his hand.

This will be my last guide for a little bit, because of school. Enough talk, let’s look deeper into this deck. 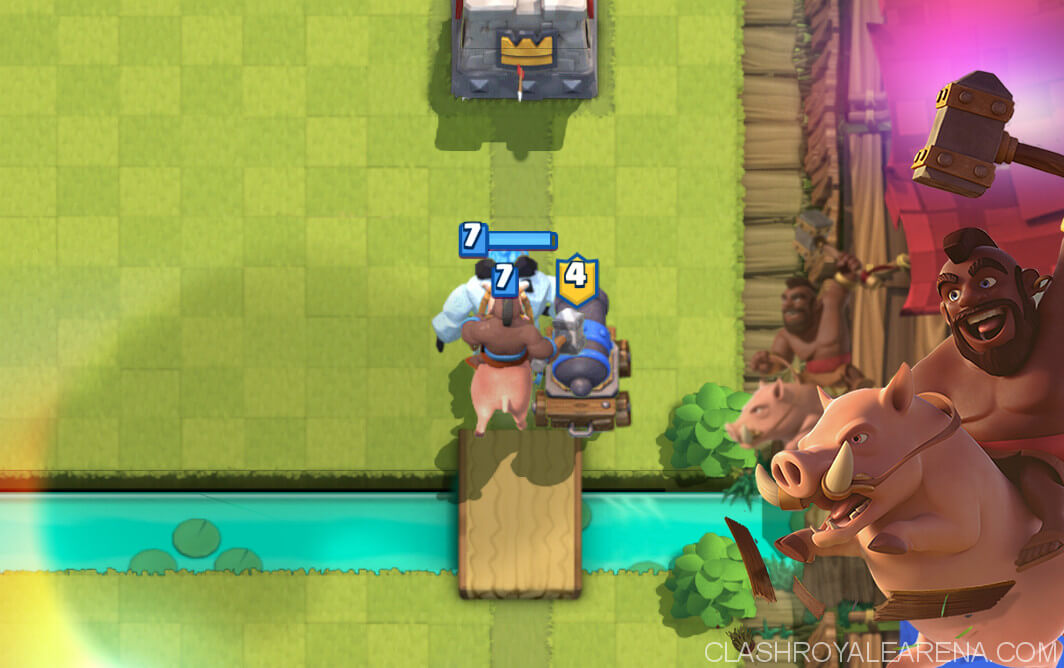 Hog Rider – Okay, so this guy will get you tons of damage with ease. Pair him with the Cannon Cart, and watch that full health tower get smashed into rubble. Hog Rider can inflict quite a bit of pressure on your opponent, and with a not-glass cannon on wheels, then it will be game over.

Cannon Cart – Above, I said that the Hog Rider was the damage, so what is this for? Swarm removing. It gets rid of Goblin Gangs, Skeletons, and can possibly take your opponent’s Mini P.E.K.K.A. (depending on levels and placement). After the swarms are removed, the Cannon Cart will help kill your opponent’s tower.

Bowler – Swarm remover. He can support your pushes, and play a great defensive game. Pair with Tornado on defense. With the Hog Rider and cannon cart, it can be deadly. It is really easy to counter push with. One of the main defense card in this deck.

Replacements: Executioner (Do this if you face a lot of Lava Hounds)

Inferno Tower – Melts every single tank. Use the anti-lightning placement. Pair with Bowler-Nado. For an unstoppable defense on the ground. For air, use Tornado + Ice Spirit for the minions. Use Ice Golem if needed.

Ice Golem – Cycle card, mini tank, and a great card to kite with. Your living snowman is very versatile and can help support your pushes, and play defense. Not too much to say about this mutated snowman who can survive the heat of P.E.K.K.A.’s Playhouse.

Bats – Cycle card that can have a huge defensive input when it comes to distracting, and killing glass cannons. For just two elixir, they can provide so much value, and will help you cycle at the same time.

Ice Spirit – See Bats. One elixir instead of two though.

Tornado – Pull troops together so your bowler can crush them with his infinite supply of rocks. Tornado Hog Riders, and Goblin Barrels to your King’s Tower to activate it.

Cycle pushes. Mix in the Cannon Cart. Play somewhat aggressively. Try not to lose a tower though. Split push and damage both crown towers. Learn your opponent’s deck.

Against beatdown, it is time to really gear up the defense. Play a little bit less aggressive if you are ahead by a tower or so. If it is against Hog Rider, or spell bait, play more aggressively.

Hog + Spam and get the win. Just rush the lane with all of your troops.

Attack both lanes! It is very difficult to deal with attacks coming from both sides. For example, drop a Bowler in the back. Next, drop an Ice Golem on the other side, near the tower. After that, place the Cannon Cart behind the Bowler. Then, place the Hog Rider behind the Ice Golem. This is almost guaranteed 1,000+ damage on each side.

Punish your opponent. Bowler in the back? Ice Golem + Hog Rider + Cannon Cart.

Don’t be distracted by emotes! Read my guide on BM if you haven’t already.

Inferno tower in the anti-lightning placement. Use Bowler and Tornado. Cannon Cart if needed.

Inferno Tower in the anti-lightning placement. Tornado all of the distractions away and kill with Ice Spirit while clumped. Bats for the Balloon.

Hog Rider and Cannon Cart are both great counters to the X-Bow. Cannon Cart is excellent against Mortar. Use Bowler to kill any possible swarms to distract your siege counters. Inferno Tower works as well.

Cannon Cart will get rid of all of those skeletons with ease. Use Bats if they have no spell (rare).

Tornado + Bowler with the Ice Golem to tank for the Bowler. Use Bats if needed. Use Cannon Cart to kill any mini tank and set up a counter push.

Activate the King’s Tower and use Bowler for the bait. Play very aggressively. After King’s Tower Activation, Tornado the Goblins from the barrel to drag them in front of the King, as you take no damage.

Try this outstanding off meta deck. Check out my youtube channel.

Shout out to Master Chris. I worked on this deck with him a little bit. He is in my clan. My clan’s name is Da Swag Men. Happy Clashing!