Hey guys it AxureFangz here! I will be introducing the “Hog Splashnado “to you guys today.

I have completely made this deck from some top players and with some card substitutions and its pretty fun to mess around with. 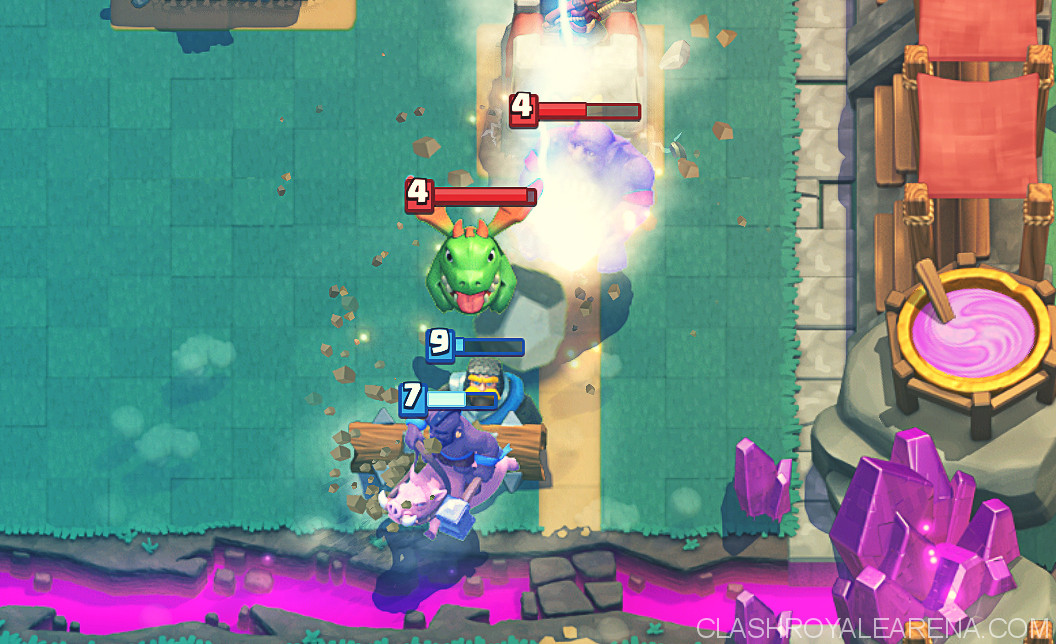 Make sure that you pay attention to how your opponent defends against your Hog Rider. e.g., if he uses Skeleton Army, then keep your Zap ready, if he uses Inferno Tower, keep your Lightning ready. (Best after counter push in x2 Elixir).

Never use your Hog Lightning combo early in the fight. It is way too expensive and if your opponent takes it up and counter pushes, you could be definitely screwed.

Bowler- This guy is a complete beast at sweeping swarms, glass cannons, E-Barbs and the Hog Rider, due to his lateral range and his knockback. His best synergy is a Baby Dragon and Tornado.

He can wreck havoc on so many ground troops.

He can help out to destroy a Golem push while the Baby Dragon, Electro Wizard and Skeletons can take out the supporting troops.

From counter pushing, he can help take out Skeleton Army and an Inferno Tower with a well timed Zap.

Baby Dragon– This aerial beast can also do the work of a Bowler in certain situations (swarm control).

He has mediocre health, so be careful of where to place him.

Best synergy with a Tornado, as every single troop will be clumped up in her fiery balls of death (or cuteness I would say?)

From counter pushing, he can do the same as the Bowler, but just a little problem with the Inferno Tower. Executioner could be used, but the Baby Dragon is just 1 Elixir cheaper.

Skeletons- Skeletons is a good cycle and with great DPS. Can be used to rip up glass cannons, Hog Riders, (Royal) Giants and many more. Pair these boney friends with the Electro Wizard and this will destroy Hogs, E-Barbs and (Royal) Giants for days!

Using these fellas can also put your opponent into some serious thinking; whether they want to Zap or The Log.

Also, these Skeletons can kite air troops, like a Mega Minion or 3 Elixir Minions. Kiting troops give you a double advantage, able to save your Tower, and to make u look like a pro.

In the beginning, you can do a small push by placing them with your Hog Rider.

Electro Wizard-A very special card indeed. His spawn damage, able to slow/stun troops, reset the target of the troops and able to do split damage make the Electro Wizard worth 4 Elixir.

He makes a VIP entrance in both offense and defense. Like I said about the Skeletons, he can be paired up with them to wreck some living Elixir (sorry, worst joke).

He can be well paired with the Tornado also! If u don’t have your Zap and Baby Dragon up (very rare chance) and your foe places like a billion amount of soft troops (or just a Minion Horde), the Tornado and Electro Wizard are your best friends!

On offense, he can stun the Inferno Tower, so it can’t ramp up to its maximum damage (same goes with the Inferno Dragon).

Before I bought the E-Wiz, I used the Musketeer, so she is a definite replacement!

Tornado- One of the most used cards in the game at the moment. With its amazing synergies with splashers in the deck, it is a force to be reckoned with! The Tornado can be both used for offense and defense.

The Tornado, when well placed, can pull a Hog Rider, Giant, Golem, Miner, or Goblins from a Goblin Barrel to your King Tower, thus activating it. This can help you a ton in such situations.

Lightning- This is you anti-Inferno Tower (or just about every building) and/or anti-glass Cannon card. Feel free to use it during x2 Elixir or if you have no valid move. Also use it on glass cannons which are 4+ Elixir, when placed in the back of the opponents Arena Tower.

This card itself can save you for so many decks, like Miner Three Musketeers, X-Bow Cycle, and the dreaded Lavaloon. More info will be given below about countering meta decks.

Can be replaced with Rocket, Fireball or Poison, but definitely recommended.

Zap- Do I need to explain, MAH FINGERS ARE CRAMPING UP.

Log can be definitely used; it just changes the usage of the other cards.

There are many things you can do at the beginning

If your opponent decides to place a Hog Rider down your lane, you can defend it with a Bowler, E-Wiz, Skeletons, or Tornado it to your King Tower.

If he/she plays a tank at the back, rush him with a Hog Rider with a Zap ready. DO NOT OVERCOMMIT!

You should now know the cards your opponent has by this time: Win condition(s), supports, spells etc.

According to your cycle and his cycle, choose when to strike and when to defend. You also should be able to predict his cards in order to counter it. Just play conservatively and you’ll be just fine!

Really, you should up your offense to keep the pressure up on your opponent so he/she cannot start another push.

Do not ever drain your Elixir down to zero, who knows if the dude place E-Barbs on your lane!

If you have already taken a Tower, well, you are in good shape, cadet!

Here, you can go mad in pushes. Just keep in mind that your opponent, too, is getting the x2 Elixir bonus.

Your Lightning-ings should become common as you gain your troops from a counterpush , and you Hog Rider to complete the package.

If you’ve already taken down a Tower, and your opponent is getting ready for another push, your best bet is to just defend the best you can. One time, I faced a Golem beatdown deck, and from the defense I survived, had 3 Bowlers, 2 Baby Dragons and 1 E-Wiz! Ohh, the trolls once you place your Hog Rider down xD.

If you haven’t taken down a Tower, but your close to, just keep Lightning the Tower down, just be careful though.

If the game is so far a stalemate, then just make a tie between the two.

Just watch out for the support troops! Use the Skeletons, E-Wiz- and/or the Tornado if needed. Use the Electro Wizard’s spawn damage with the synergy of the Tornado’s pull to help take out support troops. e.g., Minions.

Lavaloon- Probably also the easiest, surprising, right? If you play right, you might just be able to beat it!

It’s easier to just apply pressure if you have the Hog Rider in your hand. At 3000 cups, Lavaloon isn’t as common, compared to be in 4k or even 5k cups.

Hog Rider– Easy peasy! You’ve got the Bowler, Electro Wizard, Skeletons and Tornado to counter what he has got. After defending, COUNTERPUSH.

If he has support troops, like a Musketeer, use another troop to deal with the Hog Rider, but always use the Skeletons to take out the Musketeer.

In Hog Bait, you’ve got all these splashers to take out Goblin Gang, Princess and sometimes the Goblin Barrel. Electro Wizard+Tornado=GG. Counterpush afterwards.

In Hog Cycle, the Bowler and Lightning are you best friends! The Bowler’s lateral attacking is very useful, as they stack their troops in a line.

Giant and Golem Beatdown-Tornado, Bowler, Baby Dragon, Electro Wizard and Skeletons are there to help. Lightning can help take out support troops/glass cannons.

Splashyard- I’ve never lost to this deck just yet, in fact, I’ve three crowned them!

You’ve got the Bowler, Baby Dragon, Skeletons and Tornado to make sure that those rising skeleton go back in their graves! The deck mainly needs to push by making counterpushes

Night Witch– Electro Wizard for the Night Witch! If there are too many bats, then Tornado if you’d like.

Miner Three Musketeers– This deck is a bit tough to beat or even to tie!

All I try to do is that to not Lightning the Pump, but to wait for the 2 Musketeers on one side, so u don’t get 2 crowned. You got the Electro Wizard to stop the Battle Ram and Skeletons for the Barbarians if needed. Bowler the stacked troops with the one Musketeer side if that happens.

Keep pushing with the Hog Rider to get chip damage off. Don’t forget to use your Tornado!

Elite Barbarians– You’ve got Bowler, Skeletons, Electro Wizard and Tornado. Deploy the Bowler parallel to the Valkyrie+E-Barbs, and play Skeletons behind the E-Barbs. You can also use E-Wiz and Skeletons for lone-sent E-Barbs. Counterpush afterwards.

I believe I covered all the basic necessities and the meta decks that the “Hog Splashnado” can come into.

Always test the deck with clan mates and in tournaments to easily master the deck.

If there are any problems, or questions, go ahead and ask! If you want to criticize, give constructive criticism!

Overall, the deck is fun to play with in lower arenas.

Peace Out and Happy Clashing!

P.S. You people have inspired me 😀