Hey guys, Yui here and today I am going to give you a Hog Bowler Deck that got me to 4412 trophies as a level 10. I made the deck yesterday when I was floating around 4000-4100 and after trying this deck, I started to go on a win streak and then lost to a Lava Hound deck. This deck relies heavily on defense and counterpushing to win. 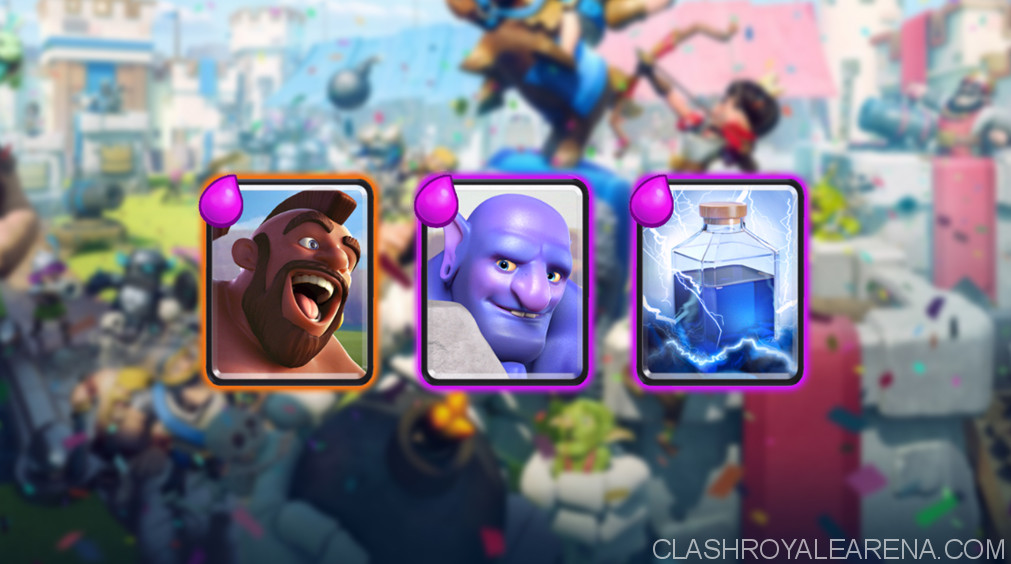 Bowler: With its pushback effect, the Bowler is extremely effective on defense. It works espically well in the current meta as it take out Skeleton Army, Hogs, Princess, three Musketeer, Ice Spirit etc. It also does a lot of damage if it is left alone. I like to start it from the back. It also works great with the Hog Rider as it can take out Barbarians and Mini P.E.K.K.A.

Hog Rider: The main win condition of the deck, does a good amount of damage and get to the Tower fast. I rarely send it alone. It can take out a Tower when paired up with the Bowler and Mega Minion.

Lightning: Lightning is great in the current meta as it kills Mega Minion which I see a lot of, Three Musketeers, Ice Wizard and heavily damage Princes (and reset the charge as well), Mini P.E.K.K.A, Bowler and the Furnace etc. It works great against Inferno Tower and Sparky as it resets them and deals tons of damage. Also, try to keep this as a suprise, it will catch them off guard. If they use Mini P.E.K.K.A or Mega Minion to defend for Hog, prepare to use the Lightning as Lightning heavily damage the Mini P.E.K.K.A for Bowler to take it out and Lightning takes out Mega Minions.

Ice Spirit: One of the best cards at the moment. It provides a huge advantage with the price, it freezes everything for 2 seconds. Ice Spirit is excellent against Miner, Sparky, Giant. It also deals nice damage to the Minions or Minion Horde for Zap to take it out. On offense, Ice Spirit is also super helpful when coupled with Bowlers, Mega Minion. Excellent at cycling through the deck .It can also assist with your Hog Push, helping stop Inferno Tower, Cannon and Tesla. It can’t be killed by Zap, and can survive 1 Musketeer shot, making it a strong offensive and defensive unit.

Zap: Is definitely one of most handful spells in Clash Royale. Zap is excellent at taking out small units such as Skeletons, Spear Goblins, Skeleton Army distracting your Mega Minions or Bowler. Zap is great with couple with Ice Wizard as it deals good damage to Minion Horde and Barbarians so the Ice Wizard can finish off them in just a few hits. Great at dealing with Inferno Tower when you don’t have enough Elixir for Lightning. Can be replaced with the log in this deck. It also help your Bowler take out the Barbarians surrounding the Hog Rider faster and deal an insane amount of damage.

Mega Minion: Excellent on both offense and defense. For only 3 Elixir, his DPS is insane (almost the same as a Prince when he is not charging). With good HP, Mega Minion doesn’t die to most spells in game, except the Rocket and Lightning. He doesn’t get affected by the pushback effect from the Bowler. Excellent against Lava Hound as he kills the Lava Hound very fast as well as soaks all damage coming from the Pups. He can kill Mini P.E.K.K.A, Sparky and Mega Minion which almost everyone is currently using. I was orginally using Mini P.E.K.K.A instead but after losing to every hound deck I play against, I decided to use Mega Minion instead.

Furnace: Furnace is a card slowly coming in the meta after the recent update. I mainly use my Furnace for defense, it takes out Minion hordes, goblins, Barbarians and Skeleton Army which a lot of people start using. A Furnace can tank a Hog Rider. I like to place the Furnace in the middle. This allows it to pull any Giants or Hog Riders. It can also help take out Mega Minions, Mini P.E.K.K.A etc. It also does decent chip damage and have a lot of Hitpoints. Try to protect your Furnace.

Always get the Furnace down or cycle to it, I don’t feel safe without it. As I state above, this deck relies on defense and counterpushing, when they uses the Hog and Ice Spirit, put down Bowler and the Furnace should pull the Hog then you can start a counterpush with the Bowler. You ideal push consists of  the Bowler, Hog, Mega Minions, Ice Spirit and if you have enough Elixir, Lightning. This push is very strong as the Bowler takes out Barbarians and Ice Spirit, Ice Spirit paired up with Zap take outs Minion and Minion horde, Mega Minion for Mini P.E.K.K.A and Mega Minion, Lightning for infernos, Mega Minion, ice wiz, muskets and heavily damaging the Mini P.E.K.K.A for a Bowler or Mega Minion to take it out as I state before. I like to start the Bowler from the back on the side your opponent is pushing and put the Furnace on the lane where they are not pushing, this will cause the Bowler to defend the Tower and will cause your opponent to push the other lane and you have the Furnace protecting it. Try to get the Tower to 1000HP as Hog and Lightning will take down the Tower. If you get a Tower down to 300 or 400, you can push the other lane as Lightning will take it out. 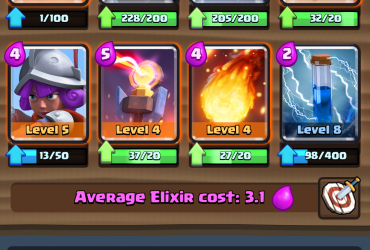