What’s up clashers, ken_the_royale here for my first guide in CRA.

My inspiration for this deck is the Clan Wars where you only can select limited cards you can use for the war.

After a win on the Clan War, I immediately tested this on ladder and it has been a great success because I got from 3000 to 3800 with this deck in just one day. You might want to use this card in two ways.

First, you might want to use this card on the counterpush with a troop tanking for it.

And second, punish by using Graveyard + Battle Ram If they place a huge tank at the back.

This can be used in accordance with the Graveyard.

More info on how to use this card properly later.

Bowler: This purple dude is your MVP on defense.

It knockbacks troops, especially Hog Rider, which is still being used a lot at the moment.

He cannot only do splash damage but also survives to all spells.

Inferno Dragon: Not everyone knows that he synergies very well with Ice Wizard a.k.a Fire & Ice combo.

Use him against tanks but be careful if there is Electro wizard or Zappies behind the tank that will hinder his power.

Only use the Inferno Dragon against Hog, Miner and other mini tanks if you used all other counters.

Ice Wizard: The chillmaster of the Arena.

As I mentioned above, he synergizes well with Inferno Dragon.

He is your best counter to the Balloon due to lack of air counters in this deck.

And can counter most of the glass cannons in the game (with the help of your Arena Tower).

Only use this card if there is a surviving Inferno Dragon or to punish the other lane.

He is also a good.counter to Mega Knight and P.E.K.K.A if Positioned correctly.

Use them to tank hits from support troops especially Mega Minion, Musketeer and Inferno Dragon.

You can also use them to surround and kill splash damage units.

Use this to support the Graveyard against swarmy troops such as Bats, Goblin Gang or Skeleton Army.

First things first, you want to know what their cards are and predict their counters to your Graveyard.

If you use the Ram, let the bowler tank hits first.

Use the Graveyard if they have Inferno Dragon or defensive building. Time it properly so that the Inferno will target the Skeletons first.

Use Freeze only if you know that they are low on elixir. Misplaying Freeze may cost you the game as it would leave you behind 4 elixir.

If both of you haven’t destroyed a tower in the first 2 minutes, then now is your time to play aggressively.

The enemy will also push with more supports and this is where the Bowler and Guards shine.

Use Freeze in every push and try to Freeze the tower and troops at a time for more value.

If you destroyed a tower then you can either choose to play carefully or to get a tower down but thus also depends on how much the opponents damaged your tower.

To Freeze or to add support

Sometimes, you have to choose between using the Freeze and one of the supports to get a successful Graveyard push.

The secret here is the troop/s used to deal with the Graveyard.

For me, if the troop used has splash damage, I will use Freeze to kill it or change the Graveyard placement.

But if it is a single targeting troop then I will change the positioning of the Graveyard so that I can get value from the support troops.

If they defend against your Graveyard and their defensive troops are out of the freeze range such as Princess or Magic Archer, don’t freeze. Just abandon the push and defend.

Only freeze if you are sure that it will be a tower down so you will not have to use it again and can focus on defending.

In pressuring situation such as a Double Prince push, you may want to defend using Graveyard because Bowler cannot handle them alone.

Hog Decks: The easiest one because you have Bowler, Ice Wizard and Inferno Dragon.

If it is the Hog lightning, only use Ice Wizard and Guards.

If it is the 2.6, you should rely a lot to the Inferno Dragon on Hog and Guards on the support.

Bowler on the Goblin Gang, Zap the Barrel.

The Princess is the hardest to counter here but bait decks have weak defense only relying in Inferno Tower.

P.E.K.K.A Decks: You are lucky if they use the P.E.K.K.A defense because you can freeze it, allowing Skeletons to clump the Tower and the P.E.K.K.A.

Change the Graveyard placement so that the support troops can also assist in killing the P.E.K.K.A.

Giant decks: Giant Double Prince can be annoying as hell. Inferno dragon on the giant and ram and guards for the princes. Dont use bowler defend because it will change its attack direction of the giant is close enough.

Use Bowler to tank and Inferno dragon the building. Ice Wizard on the swarms.

Freeze will be your MVP here.

This can either be the race to three crowns or race to kill the win conditions first.

Inferno Dragon on the Golem and Ice Wizard , Guards and Ram on the Princes.

If it’s Lumber Witch then you are screwed. The only way to defeat them is to get 3 crowns asap.

Poison is your worst nightmare here and you may want to play for the draw because they will hard counter all of your troops.

If it is a mirror match, Zap and Ice Wizard on the Graveyard.

You cannot pressure the other lane because a Balloon will be supporting the hound. And you cannot guarantee that the Ice Wizard and Inferno Dragon can defend well because of the rise of Lightning.

I guess no deck is perfect right?

This is the end of my first guide.

Hope this helps other clashers.

Hey everyone! It’s your main man Supermarine here again! However, it’s not just me this time! NebulaNoodle has also joined the party to help me in my second ever deck … 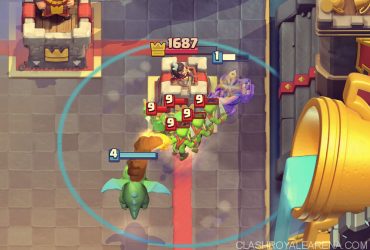 It’s me, HiPeople MC back at it again trying to make an article that might actually get submitted. On this deck, though, I will need tons more than 750 words …