I’ve been playing around with the Goblin Hut and Ice Wizard, got them to level 9 and 3 respectively and having a lot of success on ladder.

Still only around 4500 trophies right now but I do face max commons, and rares around here. My deck only really having 12.5/9/6/3 levels typically I end up facing people with Rares and Epics higher than my own.

That aside, this deck is really strong in the current meta I think, I will include a few substitutions along with pros and cons as well and without further ado, onto the deck. 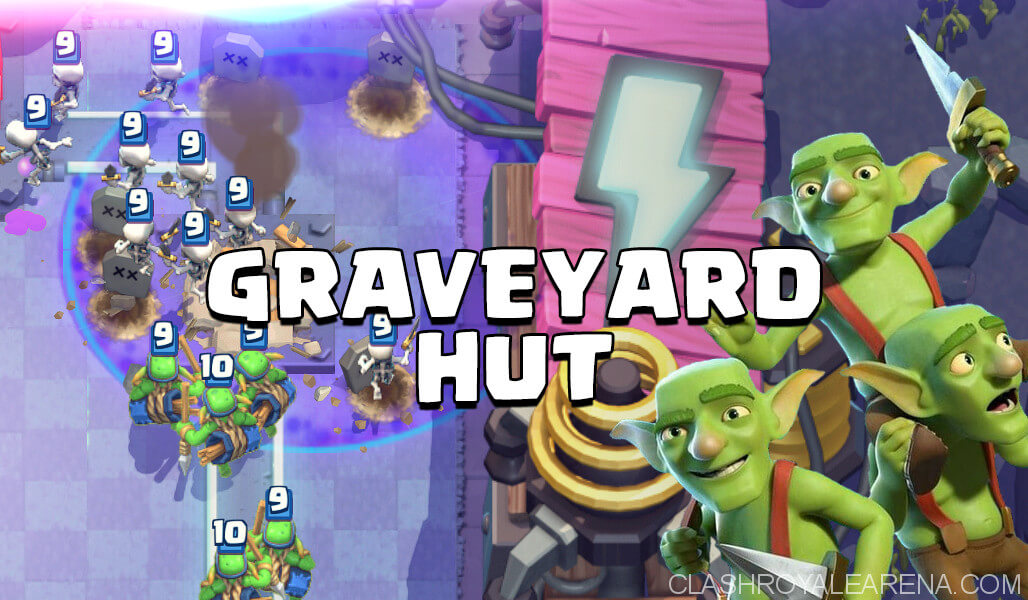 Currently by far my favorite Hut. Not as level dependent as the Furnace. If you have a level 9 Goblin Hut, I would say it’s viable till 5000+ trophies.

Rare card, not hard to level up and with its’ last buff it’s got a LOT of HP as well!

Unlike Furnace the speak Goblins stack up and can be tough to deal with.

This deck absolutely hard counters almost any Lava Hound deck and you should have an easy match-up vs Log-bait, Hog Rider, Golem, Giant etc. Siege can be a bit troublesome on a bad cycle.

When facing tanks, Spear Goblins will easily stack up, with this deck allowing for a deadly counterpush/ this point this guy just gave up.

You will need to vary placement depending on the enemy tank!

But remember that you have Tonado for this so you can always reaggro the Balloon / Lava Hound last moment while Spear Gobs+ Ice Wiz and Tower chip them away.

Went from a luck based card to a rather consistent win-con.

Now depending on placement, you will get more or less damage within a relatively small+ consistent margin allowing you to not suffer from RNG working against you.

Now like all Graveyard decks, you ideally want to defend and counterpush.

Try not to Graveyard unless it’s a punish. Ie- They Golem opposite lane or they Pump up.

Even with the nerf, for 3 Elixir this guy does a LOT. He is simple a great defensive card.

Couple with a defensive Goblin Hut, he can easily take out Elite Barbarians and support troops like Wizard etc.

I also usually use Knight to kite the troop in front of the enemy Hog (Valkyrie for example) away for Tonado to pull him to the king etc.

He by himself and Tower counter a lone Graveyard really well.

Last but not least, he is your main tank for the Graveyard.

Self explanatory, used with Graveyard.

Don’t use it if your opponent use say a Golem on the other lane while defending you Knight Graveyard with Bats.

Your 8 Elixir push with a 2 Elixir card down with an 8 Elixir Golem on the other side… You need at least 9 Elixir to fully counter a Golem push.

If you threw 12 Elixir at a Tower on the other lane they will Tower trade 1-1 and it isn’t looking good for you.

Only ever Poison if they use something like Minion Horde, Barbarians etc. 4+ Elixir

Self explanatory, good vs swarms and when you clump up troops.

Surprised this wasn’t hit with the nerf hammer but all the same used ideally in combination with Ice Wiz on defense.

Can be used to pull a Valk from the Graveyard depending on your placement. However, Valkyrie isn’t as great at countering Graveyard right now.

Can be used on offense when you have an Ice Wizard behind a Knight and you clumb up both what they use on your Knight + Ice Wizard and on the Graveyard.

He kills Skeletons of equal level. Also, unlike E-wiz, he only dies to a Fireball of +2 level!

If you get your Ice Wizard to level 3, he can’t be killed by anything below a max Fireball.

Goblins, Guards, Skeletons, Ice Spirit. Anything can be subbed in here.

I chose Minions for a bit more of air defense and some more of a Zap bait-ish element.

If they use spells on Minions, that would be tough dealing with Graveyard. Things like that.

They will mainly be used on defense on the support troops behind a Giant/ Golem etc. ideally with Knight tanking.

Setting up a Goblin Hut is always cruicial, starting up the chip damage.

Put it far enough from the river so Musket won’t kill it. You have Tornado so it’s not an issue if they Hog the other lane!

Unattended Goblin Hut can do massive damage to your enemies Tower!

It’s not necessary to Graveyard in the first minute.

Early on in 1x Elixir, you really only want to Graveyard in 2 situations.

So really the only major focus at this point is getting value Poisons + Logs, getting a feel of opponents deck, chipping with Goblin Hut and counterpushing when possible.

You should have a good sense of opponents cycle, along with the deck.

Keep a general idea of the Elixir flow.

Keep your Goblin huts up, keep cycling them on same lane of Tower with lower HP without giving too much spell value of course.

Same mentality as before, only Graveyard on counter push or punish with sufficient Elixir to Poison or Log on offense.

Start to cycle your Knight and Graveyard. Poison troops.

Defend counterpush, Knight in front of your own counter push then Graveyard + Poison.

If you get Tower HP down to below 500-600 then Poison + Log cycling will suffice as well!

Just be aware of the nerfed interactions as you will need more of each spell to really take the Tower and play it safe.

Do your best to get value in your spells too!

So in a nutshell, keep spamming out Knight  + gy with poisons. You can keep adding giblin huts if you have enough time to aid in counterpushing too!

4 cards in this deck got nerfed and this is rather rough but all the same it is quite consistently used through!

Good news for those who decide to play my deck is, this hard counters Log bait! Woo hoo!

With Poison for Princess, Log and Tornado for Barrel Knight etc for Gang there really is no way they crack through.

Set up a Goblin Hut, Poison off their Princess defense and you are golden!

The rest you should play depending on how they attack, activate your king early and life will be easy.

Your got an avg cycle of 3.5 while Log bait typically 3.3 so you should also be able to keep up with their cycle too!

Finally the long awaited nerf has knocked him off of his high horse. *Cough* I meant Hog.

No longer a top tier win con he certainly like Giant is still viable and as mosts highest rare and an easy to level up and play win con he’s still used.

However! You hard counter Hog too! Woo hoo!

Tornado and the almost impenetrable Goblin Hut serve as 2 defenses to the Hog, allowing them to not be able to outcycle you!

Ideally activate your King’s Tower with the first push of the game and the rest of the game will be in the bag!

Just don’t overcommit is all I am saying

When nado is used be aware of support

Assuming they put tank at the back, vs Golem punish other lane.

If it’s Giant I’d advice defend because Giants are very easy to kill.

Just place Goblin Hut on the same lane you want a Knight + Ice Wiz+ Tornado defense ready for their push, Logging away what you can!

Don’t always use Graveyard, if you know you are significantly ahead and can almost save for a Poison that’s when I’d Graveyard, if not I’d keep cycling to Goblin Huts and take the early chip.

You will do bulk of your damage in 2x Elixir. Plus its’ good to not give away your win con early.

2x Elixir getting multiple Ice Wizs on the map will be an easy task too!

If they just spell him off, it is always be a negative trade for them.

Ideal defense, also a good show of how Spear Gobs stacked.
He Fireballed Knight + ~ 6 Spear Goblins for a somewhat positive/neutral trade but Ice Wiz tanked for Spear Gobs allowing them to do massive damage!

Similar to beatdown, play Goblin Hut on the same lane with a Ice Wiz+ Tornado defense.

Minions can help take out some HP off Balloon before Arrowed off.

Try to nado only in the last second. If the Goblins aim at Balloon, it got 0 chance of hitting Tower.

Try to keep Balloon away from Hut if possible with the fact that it’s better it hits the Hut than your Tower in mind!

Keep Goblin Hut up, but try to tank with Knight.

Poison+ Log X-Bow or just Poison Mortar unless they give more value to Log due to cost differences with something tanking and you should be fine.

I wouldn’t Graveyard early on unless you know counters are out of hand.

Early on keep predicting with your Knight, once they switch placements like all good Miner players.

Even if you got nado and you keep predicting in anti nado spot they will switch placements.

In that case nado to king and you get an easy enough win.

Not too hard of a match-up just don’t give Poison value though! Ie- Minions on Miner if you say have a Knight to counter him, etc.

This deck is quite solid, I think Vulkan used this deck or a variant of it but I made this deck changing up my old ladder deck a bit.

Not saying I am the first to use it but I made my version on my own with inspiration from some decks I faced in challenges.

It’s very good defensively and a bit on the non f2p side but cards aren’t too level dependent! Give it a try to wish you all the best. Lolman out.