Hey guys! Its Blaze back with another guide for you all and today I will be talking about Graveyard Control!

2 weeks ago it was the only card I didn’t have but then got it in the shop 2 times in a week and that’s how I got it to lvl2. So, I spent a lot of time of trying out decks and have created this guide to create the best Graveyard Control Decks. 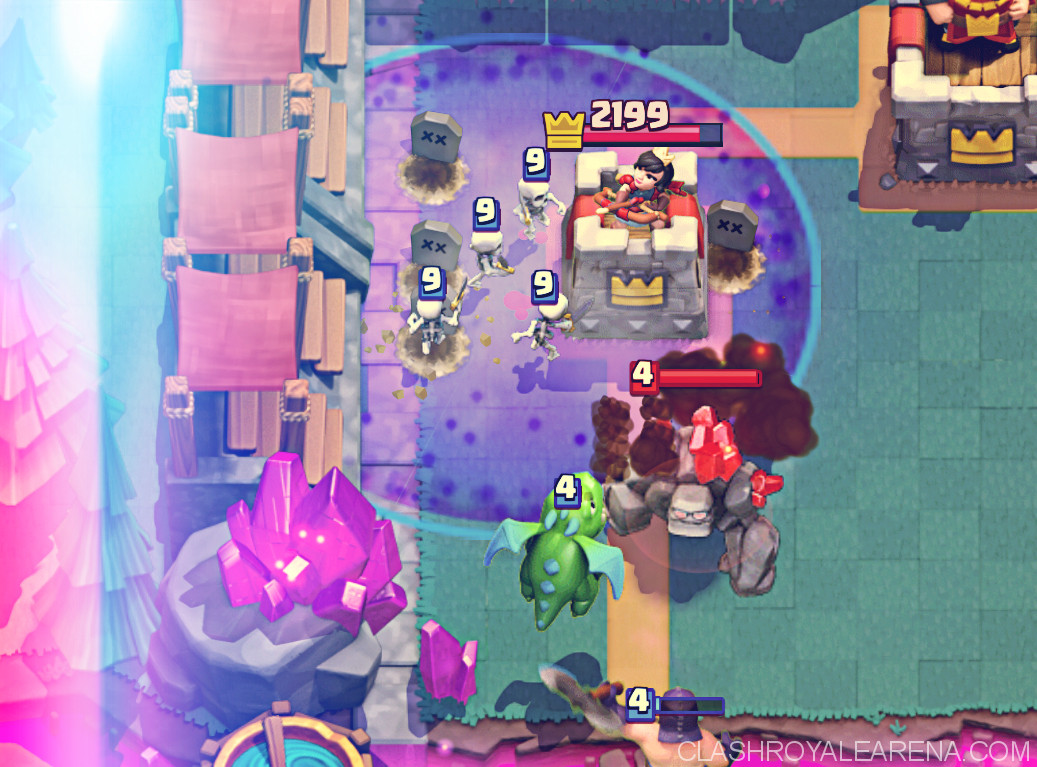 How to Build Your Own Dominating Graveyard Control Deck

Graveyard is an extremely strong card in the current meta. A single Graveyard if pushed and executed properly can devastate a single tower easily and can quickly change the course of the entire battle.

When you play it as a Control Card, your main aim will be defending with your troops and then counterpushing with Troops left from defense and graveyard. This tactic is generally strong as most opponents will be low on elixir and won’t have strong counters to Graveyard.

Graveyard is also an extremely good Pocket (aka surprising) card which can catch people off-guard. The best way is to utilize it as a Mineyard Poison deck (playing throughout as a Miner Poison Cycle Deck and when you get surprise with Graveyard Poison).

How to counter Graveyard’s Counters:

Before you get on the Slot Method and Examples you should know how you have to protect your Graveyard.

Skeletons: Skeletons are a strong GY counter on the ladder as mostly they are at a higher level then the skellies from the GY. Due to this they can kill 8 skeletons alone which is nearly 50% of the spawned skeletons. The best counter are Zap and The Log as they can kill the skellies. This is a -1 elixir trade but the damage you will deal is more than worth it.

Goblin Gang, Skeleton Army: These can easily take care of entire GY but can be countered with the same ease. Zap, The Log, Poison, Fireball and Tornado will do the job easily.

Electro Wizard, Musketeer, Archers: These can easily counter the GY if they are placed out of the GY’s radius. They are a bit less effective when placed inside as they have to constantly turn around. Poison and Fireball are the best counters.

Guards: Guards are a bit difficult to counter due to their shield so Poison is the only answer as it deals DOT (Damage Over Time). Tornado is also somewhat effective as it also deals DOT (rather less although) and can be pulled out of the GY and make them target something else.

Minions and Minion Horde: These air multi-unit troops wreck GY. The best counters are Arrows, Fireball and Poison. Zapping them is useless as they will survive and still kill them so it is more sensible to save the card and elixir for future use while The Log doesn’t damage them so its pointless. Tornado is only useful if you have and Splash Troop targeting air so that you can tornado them to the tower where the splash troop will kill them as well as damage the tower.

Baby Dragon: Baby Dragon though being not that effective is a smart choice against GY as it doesn’t die to any spell except maybe the Rocket (which isn’t used with GY). So, by sacrificing a bit of tower damage you have a +1 advantage as well as a healthy support troop for counter push. Tornado-ing it is also ineffective as it will still target skellies.

Valkyrie, Ice Golem: These are the hardest counters to Graveyard. They are enough tanky to survive any spell (though Ice Golem dies to Rocket but -4 trade and its Frost Nova will kill the Skellies and also same reason as in Baby Dragaon).  Valkyrie can counter it easily due to her 360 degree splash while Ice Golem is a great distraction and its Frost Nova will take care of the skellies. The only thing you can do here is Tornado-ing them out of the GY.

Note: Freeze can not counter but buy enough time for the Skellies to take care of ground troops and stop the damage from the air troops. However it is ineffective against Valkyrie (she can tank throughout the entire Freeze at Tourney Standards and then in one spin kill them all) and Ice Golem (his Frost Nova, duh).

How to build a dominating Graveyard Deck

This is a simple and effective slot method of Standard Graveyard Control.

Slot 1: Graveyard (obviously, what did you expect lol? )

Another deck made by me:

Are you using Graveyard? Show us your decks!