Hey everybody! Supermarine here, with, as expected, a Graveyard Bridge Spam deck, the third deck in my Hybrid Horrors series!

This deck was used by my friend/former clanmate Shocklegs FTW (remember him?) to get 12-1 in the Sudden Death Challenge and 12-0 in the Double Elixir Challenge!

Didn’t find that surprising? Here’s a surprise: This deck does NOT have Poison! 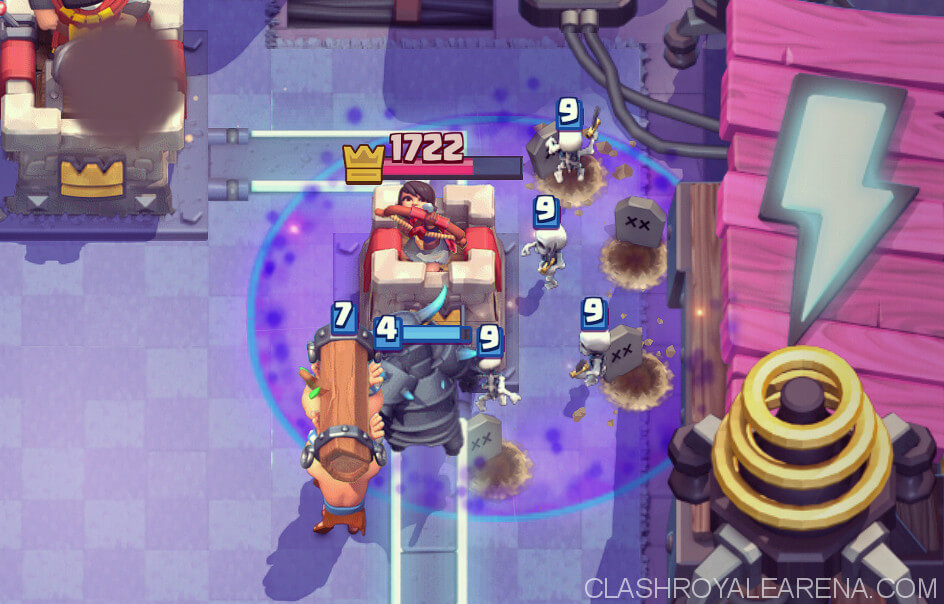 She works extremely well on the counterpush, meaning you can kill a Hog with her, then push with Ram or Graveyard or anything of the sort!

She is also your main counter to other tanks like Giant or Mega Knight.

She costs 7 Elixir, so use her sparingly!

Ever since its nerf, this card has been effectively dead, but the release of MK made it even more dead.

Is it still in use? Of course it is!

Battle Ram is still a good card to use to tank for a Graveyard and also pairs extremely well with my surprise Spell (which I will mention in its section).

Then, once it breaks, there will still be two Barbarians to put pressure on the opposing defenses.

Your win condition and spooky music boom box, and nothing more.

Freeze works extremely well with Graveyard because it disables all resistance to the Graveyard completely for five seconds!

That’s insane value if you have a P.E.K.K.A or Ram coming to the Tower as well!

Of course, this has its uses on defense too, being able to freeze dangerous threats.

With the lack of Poison, we need something to protect our Graveyard from the wrath of those pesky Minions and Goblins.

Fireball? No, that would make the deck too expensive.

Log? We could try, but then we wouldn’t be able to exterminate swarms without overcommitting.

Arrows protect from swarms and put good dents in glass cannons too, making them easier to defeat.

They are also a better option than Fireball against Goblin Barrel and better than Log or Zap against Minion Horde.

He works great against one of the biggest threats to your P.E.K.K.A and Ram: Inferno Tower.

His stuns are amazing to reset the charges and deal good damage.

This combined with your high DPS Goblins and Minions is valuable on defense and offense.

They are not oneshot by a normal Bandit attack and work great at surrounding their foes.

They are good for cheap cycling too!

Basically airborne Goblins. They kill whatever you need killed, like mini tanks, glass cannons, even Giant and Lava Hound.

Unlike Goblins, they are not as good for cycling, but their DPS still poses a threat to any troop in their way!

I know I seem crazy (because this is a Bridge Spam), but it will definitely help in the long run.

Use this time to control the match and make good Graveyard counterpushes.

Use your Electro Wizard and Freeze as threats when counterpushing.

This is when you can do what you want to do: Spamming the bridge!

Use Ram as a tank for your Graveyard and continue to save your P.E.K.K.A on defense.

Use Freeze as a pocket card to change the outcome of the battle.

Continue to cycle troops and Freeze at the bridge until a Tower is taken.

Use the Goblins or Minions on the support.

The first thing to remember when playing versus Golem is you ALWAYS need to place your P.E.K.K.A in the same lane. This allows you to invest Elixir, making defense and counterpushing easier.

Like with Giant, use Goblins or Minions on the support.

Against Night Witch, use eWiz+Minions to take her out.

Use a P.E.K.K.A of your own. To give your P.E.K.K.A an advantage, use the Goblins to distract the opposing P.E.K.K.A, and use Minions on the support.

Then, counterpush with Graveyard or Ram.

Use Arrows against any defending or attacking swarms.

Also, if they put anything behind the Hound, use the eWiz to stun it, then use Minions on whatever’s behind there.

Use a defensive Freeze if necessary.

Chip away at its health with Minions and/or Goblins.

Against any Elite Retards (yes, that’s what I call them), use P.E.K.K.A.

P.E.K.K.A and Goblins work great against him.

Be very careful when using Goblins, though, as the opponent may have Zap or The Log to clear them out very easily, so make sure you bait out such spells prior to their placement.

You have a secret weapon against these ladies: Defensive Freeze!

Pair that with your Minions (since most 3M users have Log), and they will be dead!

Counterpush with your Battle Ram if possible to really put the pressure on!

When Poison is used, however, things get harder.

Wait until almost all of the Skeletons have spawned, then Arrow them all out.

However, the main thing to remember is that the best way to prevent a Graveyard push is to prevent it from ever happening!

Spam the bridge with Ram and Minions, and possibly even throw a Freeze in as a pocket card!

Your opponent will be in a really tough spot!

Ram or P.E.K.K.A will work against Siege structures.

Use whatever spells you need to use to get the job done.

Electro Wizard is your best option against a Miner Poison push.

He will die, but he is better at mitigating as much Tower damage as possible.

Against lone Miners, use the Goblins, then counterpush with Ram.

Electro Wizard and Arrows are the prime tools to use against Barrels.

When using eWiz, for best results, place him when the Goblin Barrel’s shadow crosses the river.

This way, he can stun all three of the resulting Goblins at once.

Against any other Bait troops, use Goblins and Minions.

Again, P.E.K.K.A. Also, if they place MK in the back to invest, absolutely punish hard, as they will have little Elixir to defend against a big push!

Also be sure to use Goblins and/or Minions on the support.

So that’s all for this amazing deck guide! Leave a comment if you guys enjoyed!

Until next time, sayonara!