What’s up everyone I’m Zigge, back at it again with another great deck that I just pushed up from a lose streak using. This deck requires 2 Legendary cards, the Graveyard and the Princess. But I’m gonna show somewhat solid substitutions for them. Let’s get into it. 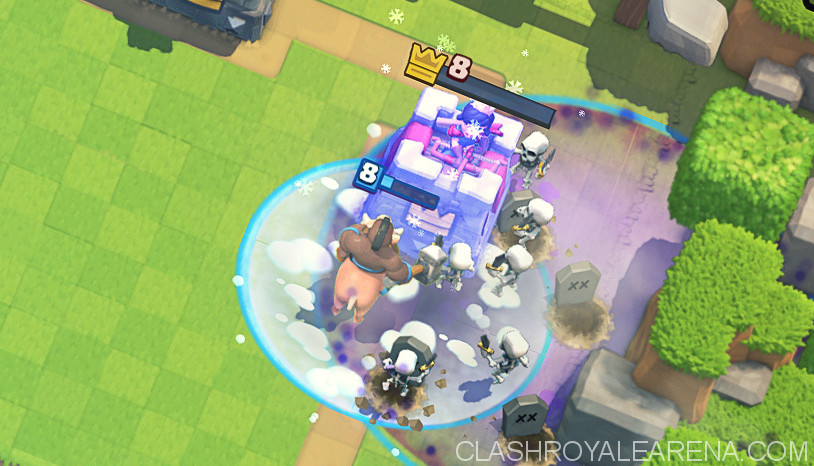 Hog Rider: You main win condition and one of the strongest offensive cards in the current meta. Will slowly chip away at your opponents tower and constantly apply pressure. Go on a Hog Rider rush if you see your opponent play a high elixir troop in the back to force out cards. You will want to use him very aggressively to chip your opponents tower down. At Legendary Arena, level 7 Hog Rider is recommended while using this deck (he must be able to tank for your Graveyard). Try to couple him with Skeletons/Ice Spirit to do the pig push. Could be replaced with Miner.

Graveyard: Your secondary win condition in this deck. It hasn’t really found a strong role in the current meta game but that’s understandable since It’s pretty new to the game. Spawns one Skeleton every 0.5 seconds over a period of 10 second for a total of 20 Skeletons. One of the hardest cards to counter if you don’t have the right cards for it. Spells will not fully defend against this card. Don’t play the Graveyard at the first push, you need to analyze your opponent’s cards first and see which are the main counters to your Graveyard.
You may want to take a look at this guide to read more advanced tips to this card.
Replace with Goblin Barrel if you don’t have it. Although, the Goblin Barrel is much more easily countered. Any level Graveyard will do the job and a lvl 4 Goblin barrel is recommended.

Ice Spirit or Freeze: Both of them are my personal favorites. Right now I’m using Ice Spirit due to the fact that it’s cheaper. Use the one that fits your playstyle the best. Ice Spirit if you’re very aggressive and Freeze if you like to take it chill and surprise your opponent with a card that will make his cards almost useless (they will still tank his tower) for a couple of seconds. Freeze works better with Graveyard but Ice Spirit better with Hog Rider. If you use Miner instead of Hog Rider, Freeze is strongly recommended. Use the Freeze Spell with your Graveyard right when your opponent plays his counter, this will force him to react with another card or have his tower ripped apart. A level 3 Freeze or a level 9 Ice Spirit is recommended.

Inferno Tower: My favorite defensive structure in the whole game due to the fact that it targets air and shreds through tanks. I used to have cannon in all of my decks but now I switched to the Inferno Tower after the rise of the Lava Hound and the introduction of the Inferno Dragon. Will deal with Golems and Giants without a problem. The Inferno Tower won’t be much affected by the Balance Changes but will be affected by this new ”Electro Wizard” card (I’m so worried). A level 7 Inferno Tower is recommended. Could be replaced with Tesla.

Princess: One of my favorites. I can’t live without her. She takes out Skeleton Army, Barbarians, Minions Hordes etc. Place her in the opposite lane you’re pushing to add double lane pressure into the mix. But be careful with her, she’s your only splash dealing troop in this deck and she is very weak. Replace her with Fire Spirits or Bomber If you want..

Mini P.E.K.K.A: Ah, this little guy who smashes down Giants like butter. I remember how jealous I was in the old arena 2 days when my friends had higher level Mini P.E.K.K.A than me. Anyway, use him to take out Wizards, Musketeers and even Barbarians with the help of a Zap. He is a heavy-hitter but is relatively squishy. Not much else to say about him. You should take a look at this guide for more details.

Skeletons: Not much to say about these three fast, very weak melee fighters. Use them to distract any type of P.E.K.K.A coming at you. Or to Surround you enemies with this pile of bones!. Any level Skeletons will do the job as they mostly used to distract your opponents’ heavy-hitters like Prince Mini P.E.K.K.As. Ice Spirit + Skeletons is my favorite combo to deal with Hog Rider when I don’t have the Inferno Tower ready. You could replace them with Skeleton Army, Goblins or Guards.

Zap: The most popular card in the whole game. Stuns your enemies for 0.5 seconds and dealing damage to them. Excellent to kill Minions and Minion Hordes with on your side and on your opponents side with a Princess shot too. Perfect against Sparky, Princes and Inferno Tower.

Try to defend until you know what your opponent has to counter your Graveyard. Don’t show you Graveyard and especially not your Freeze if you use it. Make Hog pushes and try to chip your opponent down to the 1200 or so. Then, when you know you opponents cards. Go in for a Hog Rider + Graveyard + Freeze or Ice Spirit push. The only weakness with this push is, as with Giant + Balloon, that none of the units are that good against troops so your opponents counterpush is gonna be pretty damn strong.

Guys that’s it for my guide, hope you have a good day! Write in the comments if you need any help!