Hey, what is going on, it’s ya boi, SparkynadoMeisterBro, here with my first guide! Let’s hop in to this deck, shall we? 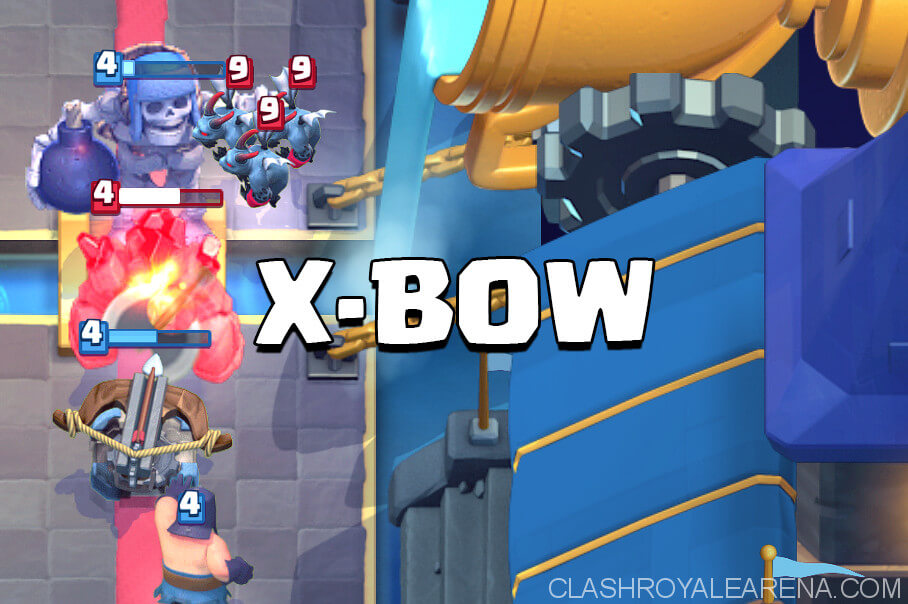 This baby is a beast on any level. He can also be a key defensive unit against bait, and a rocket bait as well.

You can play it when he wastes rocket on the tower as well.

This big doot is hard to take seriously in a push.

With the support cards in this deck, you can make pushes with him as a tank.

Otherwise, he is a beast and key defender of X-Bow.

His death bomb is great at cleaning up any group of troops. In this case, the death bomb clears the way for X-Bow to start sniping the tower!

With a decent tank in front, it can do a LOT. He does pretty good against tanks and clears minion hordes with ease, and if it is lower leveled, you always have ice spirit to make up.

With his ability to survive fireball and to one-throw Minion Hordes of many levels, he is hard to stop, even without Tornado helping him.

Helps counter annoying pushes (especially Prince), but watch for spells, as this deck is fairly expensive with a mediocre cycle.

For pumps, 3M, and your usual.

Again, be careful with this: mistakes with this card are hard to make up. Go for the positive trades or Elixir collectors.

With the recent buff he is basically a Knight on steroids!

He is pretty versatile in this deck: He can clear swarms on defense, defend Tesla and X-Bow from tanks while raging them as well, protect Giant Skeleton, kill Hogs, etc. Use him cautiously, however.

Replacements are not recommended too much, but here are some anyway:

TIP: Do not do this push if they have Rocket in hand, wait for them to waste it, using the Hybrid push below in the meantime, and then punish when he uses it.

I don’t recommend doing this push if you lost a Tower on the same side.

Place Executioner/Giant Skeleton in the very back.

If a punish push is coming at you when you place something in the back, defend the best you can because you can’t afford to lose a Tower, and avoid placing X-Bow afterwards unless you still have enough Elixir to place it in front of the Executioner/near the Giant Skeleton.

Then, place X-Bow a tile back and to the left or right of the bridge, and add extra support if needed.

Allow the Giant Skeleton’s bomb to kill the defenses by himself for better trades, but if some are escaping it place a Lumberjack or Skeleton Army to keep them from fleeing out.

If you managed to take a Tower, feel free to defend or try another Tower until:

Repeat single Elixir, and apply pressure, not giving them a chance to attack. Throw in the Tesla to tank for X-Bow if you don’t need it on defense, and not even a P.E.K.K.A can stop the push by herself.

By the time the push is over you should be making another one: one on the other side if there is leftover troops on the enemy side or you took a Tower, or one on the same side if all the defenses are cleaned up.

You usually end up taking the second Tower if you took the first one in single Elixir, but otherwise time usually runs out for me before a second Tower is taken.

Hybrid push: Giant Skeleton tanking for Lumberjack and Executioner. This push is if you are waiting for a Rocket to come out or you both lost a Tower on opposite sides.

How to attack and defend

Try countering 6 Elixir melee-ranged pushes with Giant Skeleton and have him go for a counterpush, putting Executioner in first and then Lumberjack.

If it is not worth it, start with an Executioner or Giant Skeleton in the back, and build the push as necessary, adding in Ice Spirit to cycle and get value, and a Fireball ONLY if necessary.

Place Tesla in the normal defensive position if Fireball is not needed to cycle to another Giant Skeleton/Executioner.

Rinse and repeat, the cycle is decently fast if you keep starting them in the back or next to a crown Tower. Stack Teslas on defense and he will never get to your Tower.

Double Pressure – How to defend:

Tesla is your MVP here.

Paired with Ice Spirit he can take out most lone swarms and rush pushes with ease.

He is also your main tank killer, but you need a troop supporting it for it to gain maximum effect, e.g. Lumberjack tanking a MK so Tesla and Lumberjack both do work on the tank, effectively killing it.

Fireball any support threatening your defenses for even or positive trades only, unless Elite Barbarians are on your Tower the last few seconds and Skeleton Army is dead.

Carefully use Skeleton Army to halt rush pushes for Tesla, and try to dodge logs.

If you want to stop a huge push, try placing Giant Skeleton to wipe the push for large positive trades and have Tesla clean the mess up, and again, try keeping them in the bomb radius.

Defend for single Elixir and do the hybrid push only unless their tank is out of cycle or he doesn’t have enough Elixir for it. Giant Skeleton or Fireball the support while Tesla and/or Lumberjack works on the tank.

Pressure hard, you don’t want them making pushes, trust me.

Difficult to stop but Giant Skeleton should do some defensive work.

Try to break Dark Prince’s shield with the Giant Skeleton so he doesn’t survive the explosion, allowing a Skeleton Army to do work on the Prince and maybe the Dark Prince if he is still distracted by the big doot, while Tesla tries his best to take out the tank.

Try going for a tie if you can’t get a push started.

If he uses Giant, watch for split pushes carefully. If it is all on the same side, place Giant Skeleton on the Dark Prince to take out the shield, Skeleton Army for finishing the Prince, and Tesla for the tank. If it is split, Giant Skeleton on the Dark Prince while Tesla does some work on the Giant, and possibly a Lumberjack on the Giant as well. Don’t let the Princes’ hit the Tesla! That is fatal!

Place Tesla in the middle and line up Executioner with both the Lava Hound and the Balloon.

Ice Spirit is key here, stalls long enough for the splash to kill the Balloon.

Fireball if necessary. Defend and hope they don’t have a strong Lightning or else GG, send an occasional Giant Skeleton and Lumberjack at the bridge to try to catch him off-guard at 0 Elixir to take a Tower ONLY if you have a decent lead, but don’t get caught off-guard yourself as that is a big commitment!

If they have Rocket, send an occasional hybrid push until he wastes Rocket on the Tower, then punish with X-Bow.

If he has Inferno Tower, make sure Giant Skeleton tanks while X-Bow snipes the Inferno Tower down, and defend swarms with Lumberjack.

If he has both, it gets a little hard to start a push, so simply place X-Bow a tile or two in front of your king Tower to snipe princesses and clear swarms halting their pushes, possibly baiting out their Rocket so they don’t hit the Tower instead.

You can cycle to another X-Bow to have 2 on the field if they ignore it and have supreme defense.

You can try to start a push but a draw is recommended.

Easy to Medium matchup. Their quick cycle is quite annoying.

Tesla for the Hog every time, Skeleton Army if out of cycle, but be careful. Once you have Tesla tanking for X-Bow you should be fine as long as you have an Ice Spirit handy for overleveled Hogs.

Always start with Giant Skeleton, but starting with Executioner isn’t a bad choice, either. Build your push like how I told you and you are gold.

Tesla for Tank and Lumberjack for Hog Rider. Punish afterwards.

It is Siege versus Siege, whoever outsmarts who tends to win the match.

Try not to go crazy on placing troops, a Giant Skeleton with Lumberjack for the mini-tank is usually enough.

Don’t dip too low on Elixir when his siege building has been on the field for 15-20 seconds, it WILL cost you dearly.

Playing X-Bow on defense to snipe the Siege weapon and tank for it is a good option as you have another option to take a Tower with.

Giant Skeleton or Tesla + Ice Spirit for their spam, X-Bow + Executioner to punish, if Giant Skeleton is still alive, include him in the push. GG. The only problem is bad starting hands.

Try to have Tesla tank for X-Bow as it shoots the Royal Giant.

If he keeps using Royal Giant to tank, switch X-Bow to defense to tank shots, and use Giant Skeleton to whack him down as enemy support tends to kill everything else.

Build up an Elixir lead and try to outcycle the big beast to place an offensive X-Bow.

Overall a hard-to-master deck, but a solid deck in any meta! Helped me break 3K in the past and now got me my new PB, 3.6K, with tourney standard card levels!

As an F2P, I can suggest this deck to other F2Ps if you can get the epics to at least level 5 and commons to level 11, and rares to level 8 or 9.