Hey guys it has been a while, I assume you guys may not know me. I am B.W, the guy who has made two guides centered about Golem and now I’m going to make another guide about that stunning rock again.

March update is probably the best update of Clash Royale, one of its update makes challenge be able to contribute crown to the crown chest. Since challenge has a 3 minutes overtime, I have made a deck that is fully dedicated to that crown chest farming. 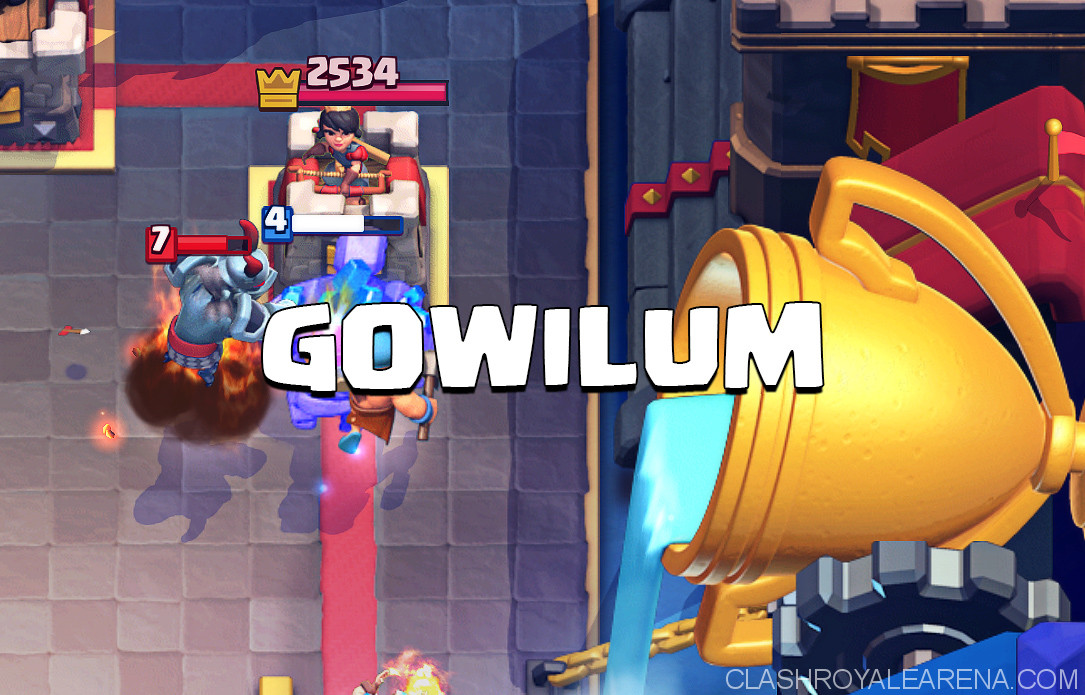 Here it is the GoWiLum Mirror deck. An idea that has come up when I have been troubling with a lot of different threats or I need to Pump more.

This guide is mainly teaching you how to three crown at challenges or even at ladder which is also viable.

For my other guide that almost has the same card, Look at here!

Mirroring this card is not recommended at all because we need that Mirror for other cards or utility spell.

Wizard – The Main splash of this deck that when placed can counter a lot of threats easily. However, using this card as a solo defend is not recommended at all because we have other supports that can take care of that job better. But you can pair this card with Tornado for ultimate clearance.

This card is also good to Mirror with according to your opponent’s card. We will explain later when to Mirror this card after finishing the explanation of each card.

Lumberjack – The Main damage dealer of this deck that can be used to defend against a lot of threat and also one of the most underrated legendaries out there. Worry not, this card provides an extreme help of this deck by creating a lot of space on this deck.

You can use this card to:

Have you seen a raged Lumberjack? I have personally experienced it and it was EXTREMELY DEVASTATING! Mirroring this card is one of the best options when they do not have any extreme splash damage. Your less level Lumberjack will die first allowing that higher level Lumberjack to rage and do an absurd amount of DPS.

Mirror – Yes, probably the last off-meta card after the Wizard and Lumberjack. By sacrificing my Ice Golem slot for this card, this deck turned from a deck that is moderate to use becoming a hard to use the deck.

You will use this card for:

You can use this Mirror card to Mirror:

Mega Minion – Just an ordinary flying troops that mainly will be used for defending. Best solo support card for your Golem because it is cheaper and also harder for your opponent to counter.

Pack this card with your Lumberjack for defending for combo when defending and push. This Flying cupcake-lover is also good to Mirror with because it is cheaper and also good to counter their annoying Bowler that causing havoc to your push.

Since this card has been nerfed a lot of times, I don’t recommend to use this card as the main counter for opponent RG/Hog, for countering that you can use Lumberjack if it is solo or Wizard if the RG/Hog are supported.

Tornado – Another game-winning card that the main function is to make the enemy troops is clumped. I will recommend to always use this card in conjunction with Wizard in a push. Using a Tornado without the Wizard will not make any change to be honest.

The only thing you will use this card without Wizard in a push is when your Golem is going to die and you use that Tornado to pull enemy Princess/Bomber/Archer/Goblins so that they will die because of Tornado+Golem death damage.

Tornado also excels in defense. With only 3 Elixir, you can pull the enemy hog to the King Tower, making it activate your king Tower. You will also need to always save your Tornado for the enemy Miner. This deck relies on Tornado to defend your Elixir Collector, so always remember to save it for their Miner.

Against a Goblin Barrel user. This card ROCKS, you can use the Tornado to pull them to the King Tower. You need to be fast or else the Goblin will die without touching the King Tower which is unprofitable for you. If you can pull this off and your king Tower is activated, congratulations you has already take over the game.

The next time they throw the Goblin barrel again, you just need to zap them and 1 Goblin stab is all they got. And you just need to wait for the opponent to says good game and left the game.

Elixir Collector – My favorite card that is always used in all my beatdown decks. Defend this Collector with a Lumberjack/Tornado so the Miner cant packs a single punch to the Collector.

Tornado + Elixir Collector is one of the best bait for the Miner. Allowing you to fully counter the Miner.

The worst placement of your Elixir Collector is probably in front of the King Tower, WHY? Well mostly because

Play full defensively and save all of your Elixir profit in the first 2 minutes. This is the hardest part because this deck is hard to defend with, you will always let their solo Hog to 1 hit the Tower.

Against an RG, you will use Lumberjack+Mega Minion or solo Wizard, yes it hurts a lot but if you are patient enough until the double Elixir time or near that mark. You can three-crown them easily because this deck focuses on making profit and this beatdown deck provide a lot of DPS.

Note: This is just a normal push and you probably will have a lot of this troops and when the Lumberjack dies the overall will be reduced to 437 and the DPS will be 135% better so it is 590 DPS.

This damage per second is just very insane and is definitely higher than the Golem-Baby Dragon-Lightning meta deck.

This deck may not be the best deck, but I’m just sharing my experience with this deck. I got a flawless 12-win classic challenge win with this deck with almost all of the matches are three crowns. I am sorry if I am a cocky guy, I just wanted to share all of my thoughts on this deck and hope you guys interested. 😀