Hey guys! Lolman here. Coming to you with another deck guide, this time I updated an old deck guide I had… of sorts.

So this deck is actually quite solid but a hard counter does exist for the deck, it’s not unbeatable but ideally you will want to try to capitalize on mistakes etc.

I will speak more in depth of that later. Onto the deck now! 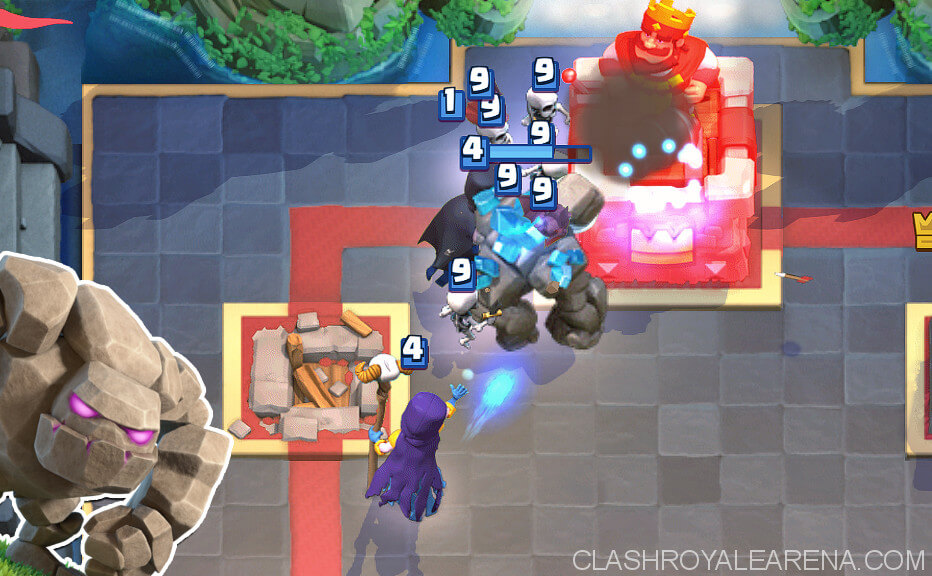 The tankiest troop in the game and a very solid win condition.

Highly risky card to play, as it is an 8 Elixir investment. Play him with caution, ideally what you must learn to do is only play him in certain circumstances which I will list below.

Staple in many if not all Golem decks.

She works really well with him because he will tank the most hits out of any card while she spawns the Bats, you typically want to place her along with your Witch behind as they compliment each other.

Try to avoid giving spell value though! The way the two compliment each other are, Night Witch will take down troops like Knight, valk etc while the Witch will take out Skeleton Army, Gang, Bats, Horde etc.

She is the ideal defense vs tanks at times too despite of her nerf!

She must go behind your Golem!

Like the Baby Dragon she is the splash attacker and you will suffer to a Minion Horde say if you don’t have her behind the Golem. She will be there to take them out, and like the Night Witch, spawn Skeletons which will accumulate behind the Golem as he tanks.

She is really useful vs P.E.K.K.Á  and Inferno Towers! Try not to give Rocket value with her. Like an Executioner, she will be a frequent target of the Rocket, so try to not place her behind the Tower unless it’s early on and you would prefer that over have them Rocket your Pump.

Try to only play this card if you have a good defensive hand! You ideally want to be able to cheaply defend common rush pushes! Cards like Goblins, Night Witch are ideal in this situation.

This card is quite important!

You need it vs Mega Knight, P.E.K.K.A etc decks that being said your #1 priority when playing him is KILL THAT ELECTRO WIZARD! You don’t want him to touch your Inferno Dragon by using Night Witch, Gobs, etc anything. Just keep him distracted or kill him before he resets your Inferno Dragon.

It’s not usually hard as the HP on one isn’t all that high!

Down to preference really, each with it’s pros and cons.

I like to go with Lightning + Log and Zap + Rocket. You ideally want one reset card! Which is why I prefer Zap over Log with the Rocket.

Early on like with any deck with the Collector, Pump up!

You ideally want to start getting your Collectors down asap. Try to build up an Elixir advantage by using your Tower HP as a resource and then start pushing.

Ideally in the first minute. I would not start a Golem in the back. Simply because you don’t want to get punished early on.

You want to use it as a resource, not play the Golem then have to defend that push with all your life ending in a negative trade there and them stopping your Golem with say an Inferno Dragon, Tower etc for a positive trade. That is disastrous!

Feel out your opponents deck. Identify their win conditions etc and then try to pay attention to their cycle while you Pump up and defend!

By this time either one of two things is happening.

Either you are cycling along with your opponent and pumping up like vs 3 Musketeers Golem etc. Or you will be pumping up carefully and defending getting chip damage on your towers early on vs like Hog.

You don’t want to get to the point where this chip damage is great enough that they will spell cycle you and defend for an example.

So ideally you want to start up Golem pushes following the guidelines above!

Typically after you cost effectively, with a Pump on the field defend a push of your opponent! Then Golem in front.

Ideally you want to have your pumps up.

At the very least one, but if you have 2 Elixir collectors that’s pretty much a certain win! You will want to start a Golem, slow roll it to the Tower and then just take the Tower like that.

Golem and put your support behind, then finally place the second Golem down and then rinse and repeat!

Lightning/ Rocket should be used when necessary as well as Zap and Log.

Just go all in! And take their towers, it’s quite simple once you get this stage.

Try to keep the role of defending to your opponent. Defend your towers with minimal Elixir.

Now there are 2 versions so I will state which of the two versions I believe will be more advantageous to play vs each matchup as well!

Okay this one is a nobrainer!

Vs Log bait you want the Log, Lightning also work because you can usually getPrincess + Inferno Tower + Tower!

Try to always prioritize Princess+ Tower because she will be taking out Bats, Skeletons and chipping off both Witch HP as well! Which you don’t want! You can afford not doing 346 damage to the Tower! So don’t be greedy.

Log Barrel, Witch will handle Gang with ease! With your Rocket, always get the Inferno Tower before it starts hitting your Golem!

Vs other decks, get the Pump advantage! And try to get rid of theirs.

Golem same lane and Inferno Dragon their Golem while they slowly chip away at yours!

Don’t give Lightning and Rocket value.

With Inferno Dragon you have the advantage! Use it to get an easy win.

Balloon will almost always hit your Tower, just deal with that! And take their towers at the same time!

Go for the 3 crown ideally and 9/10 times you will win quite easily.

Mega Knight is a little tough, especially if they rush you with Mega Knight + Minions for an example when you Pump up.

Try to make sure your defensive troop survives.

Use Witch with Tower to tank for Mega Knight+ Minions, that way Witch will actually help the Tower, rather than Witch get killed by Mega Knight and then Minions + Mega Knight take Tower for an example.

You can always counter push! Remember you want to use Tower HP as resource. Poison can be a killer.

Inferno Dragon will help vs Mega Knight and try not to get him hit with their E-wiz. Placing him safely on your side of the map.

Here in this instance, me pumping up ended up with him punishing me of sorts. I knew the Hog wouldn’t take the Tower so I focussed on killing the Mega Knight. The Witch and Night Witch finished Mega Knight and Hog off and I was able to Golem on the counter!

Depending if they run P.E.K.K.A Poison or not, this may or may not be a counter deck. P.E.K.K.A. + Poison + Log will kill almost any and all pushes.

You want to make a Golem + iDrag push with a Witch to clear small troops that might distract your Inferno Dragon, this should ideally only be done without e-wiz on their deck.

However if you face P.E.K.K.A+ E-wiz+ Miner Poison for an example that is the hard counter deck. Unlike Mega Knight this deck will just demolish your Golem and support and have a devastating counterpush! Your best hope is to Pump up and get such a huge advantage without giving incredible poisons by perhaps even split pushing, get creative to take their towers. Go for that 1-0 victory ideally as well! Wait for a slip up. Ie- P.E.K.K.A in the back and demolish their other Tower.

That is all I got for you today. I had a lot of fun playing this off meta deck. Hope you guys have a lot of success playing it, best of luck! Lolman out.