Salutations to everyone here on CRA! It’s me, Supermarine, here to present you an insane Golem Sparky Deck that my good friend and Beatdown expert HeroCow used to defy the odds and get third in a 500 man tourney (not to mention reaching Master III)!

I decided to use it and got 12 wins, and only 1 loss in a Classic Challenge, and second in a 100 man tourney!

So anyway, let’s get into this monstrosity of a deck! 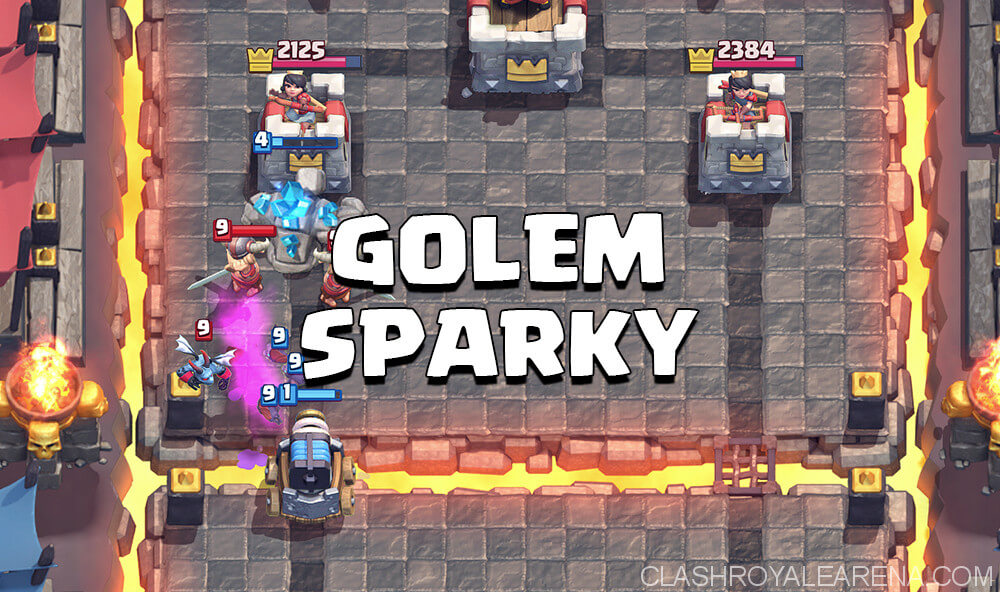 Golem: This menacing rock brute is the main tank of the deck. His high health will allow Sparky to get many shots on anything and everything on the ground.

In addition, he deals splash damage upon death, killing Minions and other ground/air swarms and really hurting anything else.

But the Golem’s most unique aspect are the Golemites. These smaller Golems keep tanking for other units for a little while longer, making a push two times as deadly (because there are two Golemites). Both explosions from Golemites can also kill Skeletons and Bats if both death splashes make contact.

Sparky: She hasn’t been seeing much use (apart from the time Nemsensei used a Giant Skeleton Sparky deck in the Crown Championship). Here, she is your main win condition, and secondary tank.

Blasts almost everything she sees into an Elixir bloodbath, and best when behind the Golem.

Like Golem, she is capable of soaking up quite a bit of damage before going down.

Defensively, she synergizes well with Tornado to take out lots of glass cannons and ground swarms, including the notorious Three Musketeers.

Overall, Sparky is a very well rounded, but risky, card to play on both offense and defense, and each shot is VERY rewarding!

Protects Sparky from the air troops she knows and hates. Combined with Tornado, he is an extremely deadly card (who doesn’t know that by now), and again, best behind Golem.

He may have trouble with higher hitpoint mini tanks, but we can deal with those using something else!

Does everything ranging from helping Executioner to pulling to the King Tower, no doubt this is one of the most popular spells in the game!

Kills swarms (Sparky hates those too), and resets Inferno.

Their high DPS allows them to keep Inferno Dragon at bay, and big tanks will without a doubt be whittled down a lot, with P.E.K.K.A and Giant Skeleton having the most trouble!

They also pose as Spell Bait and a good Electro Wizard counter (Sparky is triggered by his presence). Like Sparky, they are a very well-rounded card.

Bats: Adorable. But they’re still dangerous! And they’ve been made even more dangerous now that there’s five of them!

Their DPS is above average for just 2 Elixir, killing mini tanks, like those annoying Valkyries, Rams and Knights crossing the bridge, and also Princesses (wait for her to lock onto Tower).

They also provide good Spell Bait, meaning that if they get Zapped, Sparky will (probably) still shoot.

They provide tons of value for an insanely low cost, making them very useful!

Tesla: Yes, you heard me correctly. Tesla is in the deck.

Now I bet you’re wondering why someone like HeroCow would be using a Tesla in a Beatdown deck (I used Inferno Tower), but actually, there’s a more than practical reason!

It allows other troops to kill air units like Balloon very effectively! It also counters Hog Rider for a neutral trade, meaning that you won’t be at as much of a disadvantage after an aggressive Hog push!

It also damages mini tanks for (most likely) a neutral trade, allowing you to save your Gang or Bats on a deadlier troop.

Unlike other buildings, it can’t be cleared out in advance by spells, because it will be safe underground. Overall, Tesla should be seeing more use because of its hidden potential, and a good card to have in this deck.

This deck is a hybrid between Beatdown and Spell Bait.

Your main priority will definitely be to get Sparky to the Arena Tower and have it shoot.

ExeNado will be very good for crowd control and can clear the way for your Sparky push.

Once Double Elixir hits, you will definitely want to unleash madness, and perform push after push after push, while still keeping Elixir in reserve for defense.

Tesla can hold its own against Giant, though you will need to use your Gang or Bats to help kill it. ExeNado is great for keeping Giant away and killing support.

You only have swarms to counter the Graveyard, which is a problem. Before you go complain to Supercell that your game is rigged, use your Executioner to keep spawned Skeletons at bay. THEN use swarms if you absolutely have to.

The Tesla variant has issues, but keep your head held high! Tesla combined with Gang and Bats is good against P.E.K.K.A. You can also use Sparknado to deal huge damage as well. With the Inferno Tower variant (the one I use) use Inferno plus some bait cards to protect it.

It depends on what your opponent does with them. If they’re together, Sparky. If split, Sparky on two and Bats on one. Use Tornado if necessary, and attempt a counter push.

The Tesla variant fares well against the Hog, as Tesla counters him for an even trade. Against Hog cycles, you will want to expand any counter you have against him.

Again, Inferno Tower works better against a big tank like Golem. Be aware of Lightning, as you can use the Goblin Gang as well. Sparknado works too, as Sparky deals huge damage and survives Lightning.

Use your Tornado and Zap wisely against Barrels, Gangs, and Princesses. Tesla and Bats also work against Princess, as she will not attack a Tesla until she moves into firing range. With Bats, wait until she locks onto Tower, then deploy them.

You have a (small) chance with the Inferno Tower version, but with Tesla variant, please tell Supercell that your game is rigged. Oh, and also rage quit.

Absolutely! This deck synergizes well with tons of defensive decks, and it will be even easier to perform Sparky pushes!

So that’s all for this monstrosity!

Leave a comment if you enjoyed it, or have anything to suggest! Supermarine out!