Hog Rider, Royal Giant, Giant, Miner Cycle, Hog Cycle, Trifecta, Airfecta… the current Meta of this game is making me mad. I really love games where you can costumize everything, like a Deck here in CR… but it seems only copies… where is the originality? Where are the creativity? I really like to be different, so I tried to never use Giant, Royal Giant and Hog Rider, and then Golem make its way into my mind. And I even it’s very unusual to see any Golem deck, I decided to be even more different! So here is my final product, a deck that after some training, can be dangerous enough to get me a 11 win-streak in the game (not on challenges! On the Arena 9!). Here it is! 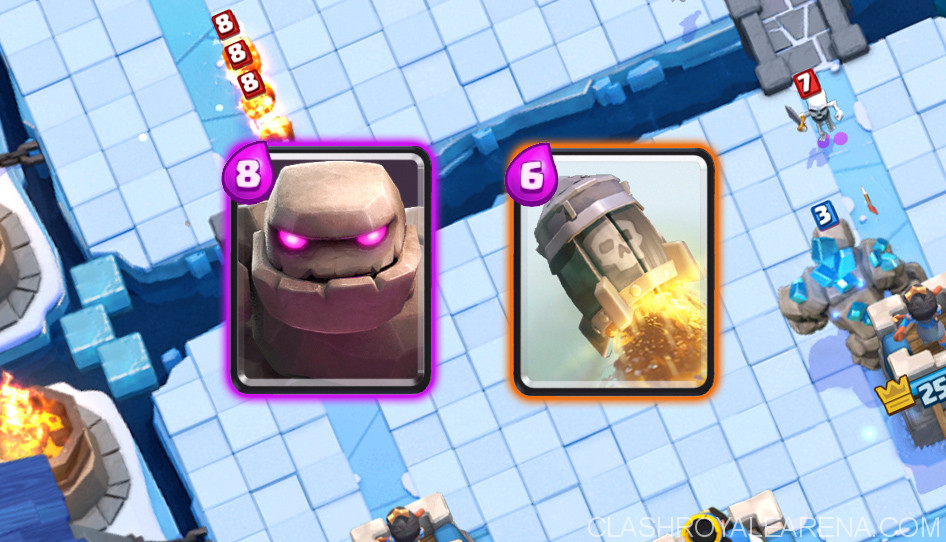 Golem – The Golem is the biggest tank in the Game, great on attack due its High HP, dangerous due its High Cost. In this deck, you want him in the front of almost every attack. The explanation of the deck in a game will be under

Guards – In my opinion this card is the best low cost card to deal with Mini P.E.K.K.A, Prince or any High DPS card, as a zap can’t kill it in one hit. A needed card in this deck

Ice Wizard (Wizard,Arrow,Poison,Spear Goblins) – Ok, ok. It’s a Legendary, not everyone have it… but here, it’s a needed card. I put some candidates for change, but the Ice Wizard is, hands down, my favorite Card. Kills low-cost cards, Minion Horde and Barbarians with some help. You want him on defense and attack

Zap – Nothing to say here… My favorite common card in the current game, the Zap offers great value with a insane low-cost.

Musketeer – My favorite rare card in the game, the Musketeer is the best support for your Golem… can attack both air and ground, can outrange the Cannon, can reach the front of the Golem with ease, can defend a line from the other, as all the cards here, a needed card in this deck.

Mini P.E.K.K.A – The Mini P.E.K.K.A is your emergency defense (if Inferno Tower isn’t on rotation, or isn’t valuable to play). But he really shines on defense. Sometimes I don’t have to even play my Golem in some games, as counterpush Mini P.E.K.K.A tears apart a tower if my opponent plays a mistake. Of course, a needed card in this deck. I strongly recommend you take a look at this page to read more uses of the Pancake Hero!

Rocket – Here things get a little tricky. Why Rocket? you say, Isn’t Fireball enough? you asks. A 4.4 deck with a Rocket doesn’t seems right, but this is the difference in Golem decks, this is the unusual part. It a support card on my pushes, not a last-second card to finish towers. It can get pretty valuable when I kill a Sparky+Wizard, or Barbarians + Hog Rider. This is a surprise card. Don’t give away on the first push, only if necessary or you have a big opportunity (something like Sparky+Musketeer, or Ice Wizard + Musketeer + Mini P.E.K.K.A). This unusual play normally gets my opponent surprise when it whipped all its defense, while a Golem melts his tower down. Pretty underestimated card, but necessary here.

Inferno Tower – In the current Meta, a Inferno Tower is needed card as it melts down any Giant, Hog Riders if placed correctly or anything if paired with a Musketeer or Ice Wizards. Can be hardly changed to Bomb Tower, but then it makes the air control difficulty or any High HP card in general

At First, you want your opponent to start (you can wait 1 minute, than place a card to ensure if actually your opponent leaved the game without it showing). If he places a support card far back, you can respond too with a support card (If you have the BAD hand = Golem + Rocket+Inferno Tower+Zap, use Inferno or Golem). If he uses a collector, you can choose to play a rocket (I don’t do that, but you decides) or a mini push, like Mini P.E.K.K.A + Guards (+Ice Wiz)

If you placed a Golem, when he gets to the bridge, you will have 10 elixir, so you play either a Ice Wizard (if he has minion horde), a musketter (if he has only glass cannons – high DPS, low HP) or a Mini P.E.K.K.A (if he doesn’t have any air troop)… store the last 6-7 elixir for a Rocket or Zap. Remember, when you places a Golem, be ready do defend a surprise counterpush. Normally, my first push don’t take out the tower (only if I get lucky, or he makes a mistake), but can lower a tower to significant health.

This is when the deck shines… here you can make an enormous push… if he doesn’t have a Fireball or so you can place a LOT of things together, and he won’t be able to defend. It he stacks troops, use the Rocket! It’s here for a reason! 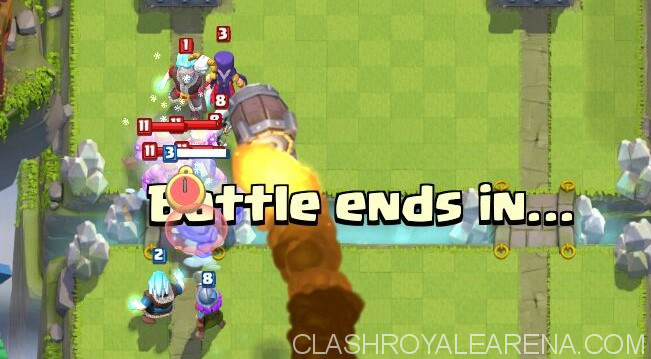 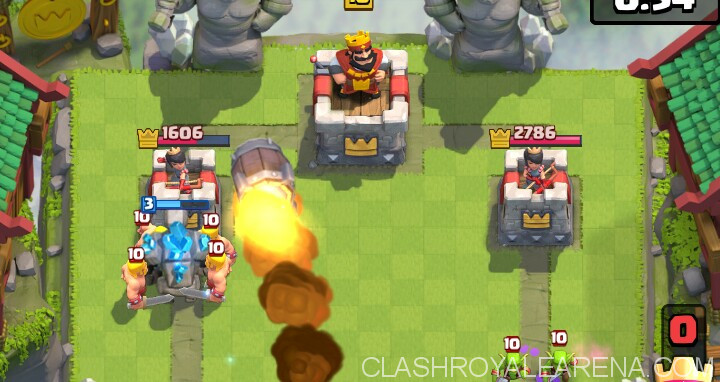 First, let’s list the cards you have available to defend: Inferno Tower, Rocket, Mini P.E.K.K.A, Ice Wizard, Musketeer and Guards. You will have at least two of these cards in your hand to defend, so this is not get so tricky… I will list the current Meta, and let’s see how I would defend.

Giant Poison (Before the update 10/20) – Inferno Tower to pull his giant, if he uses Zap, throw Mini P.E.K.K.A, and you can use Rocket/Guards/Mini P.E.K.K.A, in his support. Always counterpush (if you can, place Golem on the bridge, so your troops can make a push. All troops can turn defensive mode to offensive mode, this is the best of this deck)

Hog Cycle – You can defend with Inferno Tower (even paired with Zap, a single Hog won’t defeat a Inferno Tower if placed on middle). Zap if needed. If it is a Trifecta, you can rocket everything! Than, as always, counterpush. Oh, and if you don’t have Inferno, you can use Mini P.E.K.K.A too

P.E.K.K.A – Although it seems, this is not a trouble, just try keep attacking in the same lane that he put his P.E.K.K.A, so his P.E.K.K.A is distracted by your Golem while your support kills him. As always, Rocket his support if needed.

So here we are guys. If you didn’t like this deck, change what you think it’s the best! Just one tip: be different, and I will tell why. Supercell likes to buff low-use cards, and debuff high-use cards. Golem has already buffed 3 times since I start to use it 🙂

Thanks guys, I am Leinadium, co-Leader of the clan Brazil Team, and I will be in the comment section ready to clear all of your answer (I speak Portuguese too….!). Thanks guys, and I see you in the Arena!