Hey guys, I’m Yui and today I’m going to share with you my Golem Poison deck, which got me to 4200 club this season. 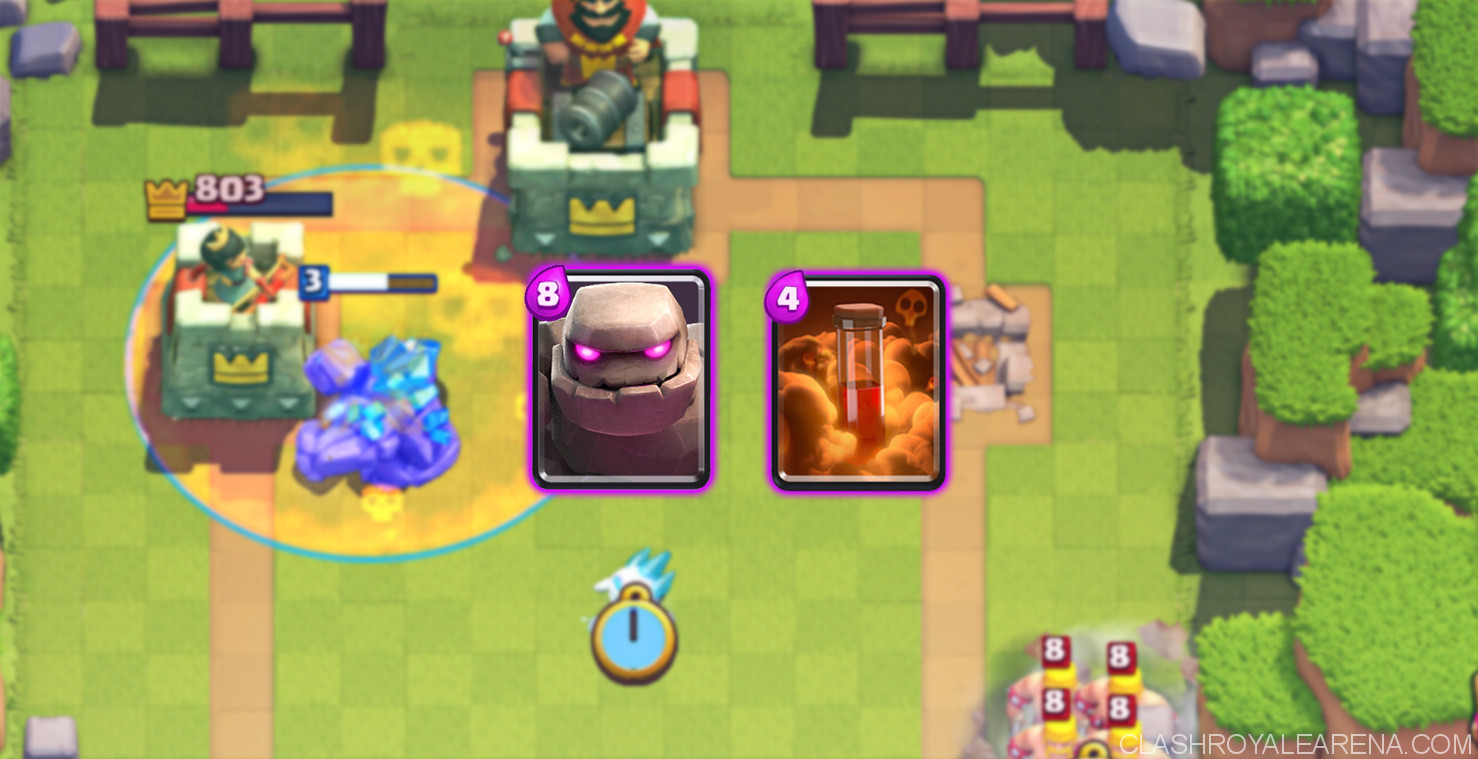 Golem: The Golem is the main tank of the deck and a underused tank in the current meta. It has the most health in the game and probably one of the slowest troops in the game. Since it is so slow, take advantage of  the speed to build a huge push. Like the Lava Hound, when it dies there are Golemites which have a decent amount of health which can tank for the Mega Minion, Mini P.E.K.K.A and Valkyrie.

Elixir Collector: The most important card in the deck as you are using the Golem which costs a lot of elixir. It gives you a huge Elixir advantage and forces your opponent to attack first. Try to protect it at all cost.

Poison: One of the best Spells in the game right now. Not only does the Poison have a large radius, it also slows down enemy troops. It also takes out Three Musketeer which I see in the current meta a lot, normal Musketeer, Ice Wizard and Barbarians. It also slows down Inferno Tower and take out Cannons when you are doing your push. Try to push on the side where you opponent places his Elixir Collector so you can Poison it as well!

Ice Spirit: One of the best cards at the moment. It provides a huge advantage with the price, it freezes everything for 2 seconds. Ice Spirit is excellent against Miner, Sparky, Giant… It also deals nice damage to the Minions or Minion Horde for your Princess to take them out. On offense, Ice Spirit is also super helpful when coupled with Mini P.E.K.K.A, Mega Minions and Valkyrie. Excellent at cycling through the deck.

Mini P.E.K.K.A: Another extremely versatile card in the current game meta. Mini P.E.K.K.A is the best tank killer at the moment. He can easily shreds Giant, Royal Giant, Hog Rider… in seconds. If you can get the Golem and Mini P.E.K.K.A to a tower, it’s over.

Mega Minion: A great defensively card. For only 3 Elixir, his DPS is insane. With good HP, Mega Minion doesn’t die to most spells in game, except the Rocket. It doesn’t get affected by the pushback effect from the dominating Bowler. Excellent against Lava Hound as he kills the Lava Hound very fast as well as soaks all damage coming from the Pups. He can kill Mini P.E.K.K.A, Sparky… before they hit your Tower. Take a look at here for more details!

Valkyrie: Excellent on both offense and defense. She can act as the mini tank in some small pushes with Mini P.E.K.K.A and Ice Spirit. She is great at dealing with most support troops such as Goblins, Spear Goblins, Witch, Musketeer… helping your Mini P.E.K.K.A and Golem get it to the Tower easier.

Princess: A extremely versatile card as she takes out Minions, small troops fast and take out Barbarians from far away. If you don’t have her, you can use guards, normal minions and Zap instead. Excellent at keeping the pressure on your opponent, forcing them to react fast!

Always try to put your Elixir Collector down first before doing any push. This will force your opponent to attack first so be prepared to defend and gain Elixir advantage.
If you don’t have the Elixir Collector in your starting hands, drop your Princess down at the back and wait.

The Golem is a hard card to play as you put it down, most of the time, your opponent goes the other lane so put your Golem down when you have a decent Elixir advantage.

If your opponent starts with the Giant from the back, I usually put the Golem down to soak damage coming from the support troops behind the Giant. Then, use Mini P.E.K.K.A + Ice Spirit to quickly take out the Giant. If the Golem is still alive, we will have a very strong counterpush. 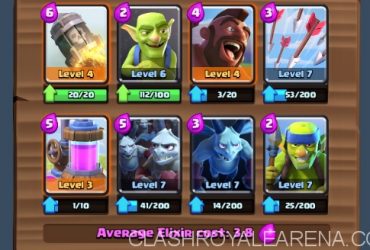 Hello everyone, Today I am going to introduce with you an Arena 6 No Epic Free to Play Deck which helped Swirlled, co-leader of Reddit Beta, push from 1700+ trophies … 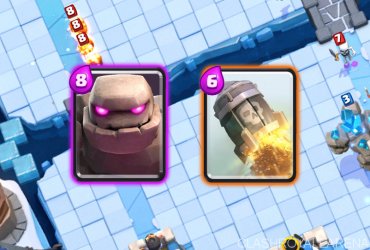