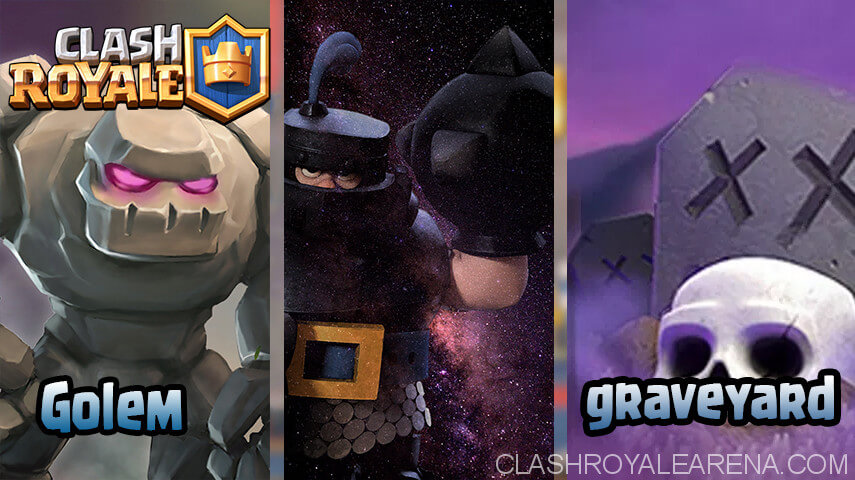 I’m Won! and this is my third guide. This is on a Golem Graveyard deck that focuses on winning/draws against ground-based decks. I’ll be explaining what the deck is, reasonable/unreasonable substitutions, how to play it, how this deck does against other kinds of decks, and what this decks “stats” are.

Golem: No duh. It’s Golem. The main purpose of this card is to serve as a tank for any splash units your opponent may play down, as well as a way to tank the princess tower’s/crown tower’s shots. Reasonable substitutes: PEKKA*, Giant, Mega Knight*, Lava Hound*. Unreasonable substitutes: Royal Giant, Battle Ram

Graveyard: This is the primary win condition. Don’t replace it with anything because nothing works as well as Graveyard. Goblin barrel will NOT work the same way Graveyard does.

Tombstone: Best building in the game against low-cost decks. Provides constant pressure, constant defense, positive elixir trades, building targeted diversion, and finally the ability to counter Furnace (which is not as relevant after the end of the “Furnace is the best building” meta). Reasonable substitutions: Inferno Tower*, Tesla*. Unreasonable substitutions: Any other building.

Bats: Bats became a better Minions after the buff of adding a fifth bat. This is your only air defense and is primarily used as a tank shredder or medium-health troop shredder. It works wonders against Musketeer, Electro Wizard, and a lot of other things. It’s also log-resistant, which is great for spell-bait decks. Reasonable substitutions: Minions, Ice Spirit*, Skeletons*. Unreasonable substitutions: Minion Horde, Skeleton Army

Knight: The tank that costs 3 elixirs. He provides so many positive elixir trades and can be used as a secondary win condition instead of Golem against annoying decks like spell-bait. Reasonable substitutes: Ice Golem, Bandit*. Unreasonable substitutes: Anything 4 elixir or above. Do not squander the opportunity to use a cheap cycle card that can also double as a Graveyard synthesizer. This means Mini Pekka, Lumberjack, and Prince is terrible choices.

* Things marked with this symbol mean they will change the playstyle of the deck. Here are the details of all of them:

PEKKA. This is certainly possible, but changes your deck into a counterpush-centered deck, relying on your opponent sending a Giant or Golem and then you counterpushing it with your PEKKA. The problem is that it will be easily distracted once in your opponent’s field, so it will be hard to make splash units target the PEKKA instead of the skeletons from the Graveyard.

Although this is not recommended, this can really catch your opponent off guard if your opponent relies on a single splash troop to kill all of the Graveyard’s skeletons. The problem is that if Poison goes, you lose your ability to damage massive swarms of enemies from a Graveyard counterpush, which happens a lot. Consider Freeze if you’re replacing Golem with PEKKA or Mega Knight. Otherwise, don’t.

Inferno Tower. This is the best substitute in my opinion because it’s an ability to destroy Lavaloon is unparalleled, except for Inferno Dragon. However, that changes the playstyle from a Ground deck counter to a Lavaloon deck counter. 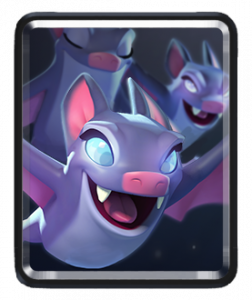 Skeletons. You lose all air defense in exchange for a cheaper cycle card that will sometimes do just as well of a job at defending against a lone unit.

Ice Spirit. You lose most air defense in exchange for a cheaper cycle card that will freeze units for 1.5 seconds. Can be paired with Graveyard for a very cheap 6 elixir tower takedown. If you’re going to choose Ice Spirits or Skeletons because your bats are Level 1, I will take Ice Spirit.

Bandit. A wonderful punisher. This changes the Golem deck from a slightly defensive deck to a very offensive deck. I’ve experimented with it, but Bandit’s lack of HP often leads to a weaker Graveyard in response to a speedier and better tower breaker.

How do you play this deck?

Start of the game: Start with a Tombstone in the center, a Knight in the back or a Goblin Gang split down the middle. Don’t start with anything else.

If your opponent started with a golem in the back, and you have a Knight and a Graveyard and a Poison, you basically won. Just put Knight at the bridge, Graveyard near the tower, and keep your poison ready for a swarm card. Otherwise, play safe and don’t drop your Golem unless they’ve overextended to the point of oblivion.

Do not overextend. Chipping your opponent’s towers with Goblin Gang, Knight, Bats, and other units are great but focus on defending.

You can now prepare the Golem if you have Tombstone, Bats, Goblin Gang, and a Knight coming up. Graveyard can be cycled to very quickly. Just make positive elixir trades and look for an opening. 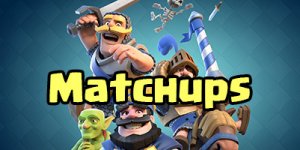 Anything that isn’t PEKKA+Mega Knight or Lava Loon or spell bait: You’ve basically won. Not even a Sparky can prevent the destructive power of a Golem and Golemites paired with a Graveyard. Worst case scenario, your opponent can’t push past your constant cycle of cards. Cheapest cycles: Bats -> Tombstone -> Log -> Goblin Gang. (10) Second cheapest cycle: Bats -> Tombstone -> Knight -> Goblin Gang. (11 and much more common). As you can see, these combos will effectively deal with about any push that does not consist of air units. Even Golem beatdown decks can be easily destroyed because Poison+Log will kill any supporting units. If they use an Executioner, Knight will clean that guy up.

PEKKA+Mega Knight: Go for a draw because if you haven’t taken a tower by double elixir you may as well turn into a turtle. PEKKA will destroy golem, and Mega Knight will counter Graveyard. Then you’ll have to deal with the counterpush. Better to drop Knight to deal with Mega Knight while dropping a Tombstone to keep the PEKKA and Mega Knight busy. Then put Bats down and watch them die on your side of the arena.

LavaLoon: It’s a mad dash for the enemy’s King Tower. You’ll usually lose due to the Balloon’s sheer power. However, a Tombstone that pulls the Balloon back could be very useful and win you that matchup.

Spellbait: Go for the cheap Graveyard push. Log and Poison do wonders against this deck by destroying everything in that deck. If necessary, use Poison to win you the game.

Defense: 6/10. This would probably be closer to a 9/10 but air decks exist. If air decks are the sole thing keeping you back from your next arena, don’t play this deck because it’ll make you pull your hair out when you see your Bats getting Zapped.

Counters: 8/10. This deck has a counter to everything. The problem is that they are often countered by an opponent’s counter-counter. That’s why LavaLoon is so threatening. Bats can be shut down by any splash troop, or a Zap/Arrows. Otherwise, Elite Barbarians, Hog Rider, etc. Aren’t very powerful against this deck.

Easy to use: 3/10. In my experience, one wrong move can cost you about 1k hp. As a beatdown/cycle seige hybrid, 1k hp isn’t as much as it would be for other decks, as this deck can easily 3 crowns, but it’s a huge deal if you can’t destroy an enemy tower fast enough. Overextending with Golem is an issue that requires knowledge on how to play Golem. Then again, which Golem deck IS easy to use? This one is probably as easy as it gets.

F2P Friendliness: Ladder: 2.5. Graveyard’s level is not crucial, and nor is Log’s. Just having one is good enough. What matters is the Golem’s level and the Poison’s level, both of which are Epics.

Sidenote: This deck performs almost as well if your deck is underleveled, but will falter if your poison is too weak. This deck does well in Ladder and Challenges, but I use it in 2v2 a LOT, because it’s very versatile. I just pray that my ally has some air defense.

Have fun with this deck! If you tried it out, tell me how you did!