Hey guys, SCorpSCilla here, back from the dead (not really) finally doing some guides again! Today, I will be showing my new Golem Bandit Night Witch deck, which got me loads of trophies lately! 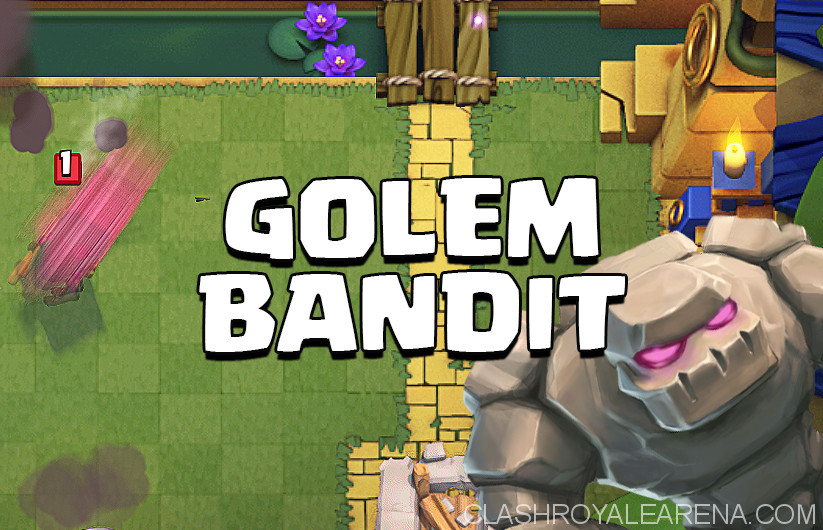 I haven’t given up just yet. Clash Royale’s not being doing so great for the past few months… until I made this Deck!

I had just bought Night Witch and Bandit from my shop (F2P struggles) and I just said, “Screw it. I’m going back to Golem beatdown” since I didn’t have Lava Hound (again, F2P struggles).

This Deck has suddenly become the new meta for me. It carried me from 3000 trophies to 3850 in a single day (had to play like 40 matches). After all this time, I smash together a Deck that absolutely sucks with hopelessly underleveled cards (9/7/4/1) and all of a sudden my way to legendary has been pushed open. Don’t worry tho, I tilted back to 3650 🙁

With that said, let’s get on to our Golem Night Witch Beatdown.

Golem- Our main win condition, this bulk of rock has about 4000 health, hits hard as a Hog and explodes with damage as much as a Hog.

The two Golemites are like Ice Golems, just not as blue.

Lightning- This spell is one of the most important cards in this Deck.

I tend to use it differently from most people.

Let’s your opponent has placed two Wizards and an Inferno Tower to counter your Golem big push (more on that later). I would position it so that the Lightning would strike the Inferno Tower and the two wizards instead of the two towers and one of the wizards.

After all, value is more precious than damage. Same goes with defending.

I would use Lightning to stop a 3 Musketeers push or a Trifecta push than save it for later. It definitely gives me a positive Elixir trade (OJ where you at).

Nightwitch- I actually think this card is pretty balanced when it comes both to tournament standards and playing against overleveled people.

It happens with many new cards- either

This Night Witch should be used as a glass Cannon- fragile but powerful. Her attack gives around 280 damage and is pretty damn good. She has a slight range light the Prince does with his lance.

She is one of the main counters against Lava Hound decks as her Bats constantly build up. Just two of her Bats and the help of the Srena Tower should kill a Balloon!

Don’t forget to use her in the push. You could replace her with Lumberjack, but then the Deck would be centered around a raged alcholic and it would lack one air defensive troop (kind of)

Bandit- This little Legendary is slowly become more powerful with that new buff, which is really helpful.

This Bandit hits with 160 damage and dashes with 320 damage, and has a dash range from 4-6. Has slightly more health than the Night Witch, she isn’t like a glass Cannon- more like an assassin.

She is used mostly on offense. Use can place her on the bridge if you have her as the first card, since she isn’t going to be much use on defense except when she takes out support units in a big push or is basically a cycle card to sacrifice.

In a push, she is essential. Once the Night Witch pops, the Bandit is to dash in and start tanking with the two Golemites for the Bats while smacking the Tower herself.

You can replace Bandit with Miner, I strongly recommend that. They both basically have the same role except where Miner is better at chip damage, Bandit is better at bigger damage. Bigger is better.

Dart Goblin– Why Dart Goblin SCorp? Out of all the cards that might be used for air defense- Muskeeter, Mega Minion, Minions, Baby D- you choose Dart Goblin?

Of course, feel free to replace him with Muskeeter.

Zap- Not much to say. Be careful against Zap baits!

Skellies- Even with the nerf, the skellies are pretty good with insane Elixir value, and of course there is no card replacement that has the same role as skellies. Feel free to use gobs instead.

Use skellies to defend the Miner, Ice Spirit and Zap against Minion Horde which should kill it (unless the Minion Horde is max… trust me it’s scary when you’re in my position)!

Take a look at this guide to see more about the Ice Spirit!

At start place Bandit at the bridge and have Zap ready.

Don’t have Bandit? Cycle with Skellies and/or Ice Spirit.

Still isn’t in the cycle? Place Night Witch in the back.

If the opponent rushes you, defend with the Bandit, Skellies, Ice Spirit, and Dart Gob. Now you have another Night Witch!

You can spam Night Witches and Bandits in the beginning, especially if you’re against chip damage decks.

Generally, I’d not place Golem until 5 to 10n seconds before Double Elixir. Then, you can use Dart Goblin, Skellies, and Ice Spirit to defend until the Golem reaches the bridge.

Place Night Witch, then keep Lightning on hand. Use Zap against skeleton armies and gob gangs, using Ice Spirit and Zap against Minion Hordes (that is usually not needed tho). Start spamming and cycle and yep, you got 3 crowns.

Lavaloon- Place Golem on the opposite lane on the bridge. This forces your opponent to defend, and now you can use the range of the Dart Goblin to both support and to defend (you’ll be surprised how far it can shoot). Otherwise, suck it up and defend against.

Golem beatdown– Place Golem as well, except place it so that when the Golems meet, your Golem is slightly ahead of the bridge. This surprisingly gets you more damage while defending and in return getting less damaged.

Exe-Nado– Use Lightning and Zap to stop that Executioner!

3 Muskeeters– Use Lightning extensively, Use Bandit for the sole Muskeeter and Night Witch+Ice Spirit for the other side (if they split).

Spawner- Screw them and go heavy with the Golem!

Well this is my unique Golem Night Witch Deck, and it was a blast especially finally getting into Legendary Arena (I don’t claim to be a pro, oki?), and 3 crowning all those blasted level 11’s and 12’s (i’m level 10).

I hope you guys like this Deck and I’ll be hanging around. SCorpSCilla out. 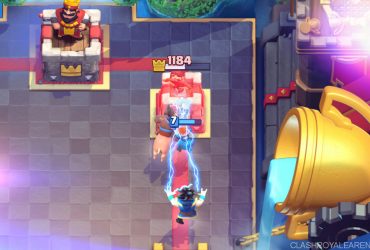 Whazzup fellow players, Norbysweg here, back at the regular posting with an interesting, very interesting deck that caught my attention immediately I thought about it. Superb Trifecta Combo! I was … 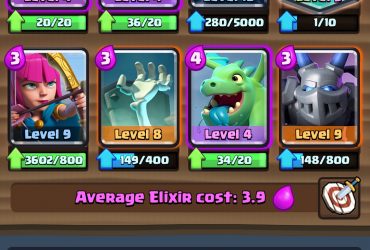