This Golem Clone Deck is the third and final instalment of my Clone series. Following the success of the Lava Clone and Three Musketeers Clone Decks it made sense to try out another, potentially devastating, use of the clone on the Golem. 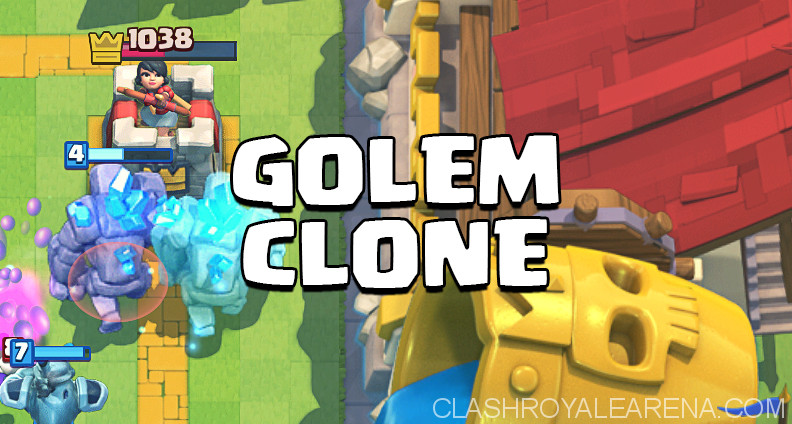 The main emphasis in using this deck is to utilize the heavy splash damage that you get from the Golem when it breaks up on the tower. Even if none of your Golems get a hit off you will still do (at level 4 – (259 + 53 + 53) x 2) 730 damage with the clone purely from death damage. Factor in the hits and any other troop damage and you’re able to do a whole load of extra damage that will often take down a tower.

So why do we choose the Golem to clone? For several reasons really. Firstly, it’s a unit that upon death spawns further units that continue to do damage. Secondly, the death damage is very high and the extra spawned units also have death damage and thirdly that death damage doesn’t just take out towers it takes out surrounding troops such as Minions, Goblins or Skeletons whilst doing decent damage and shoving back bigger troops. This allows the other units you have in support to continually deliver damage, especially if they have also been cloned.

Let’s take a closer look at the deck I’ve been using and the role of each of the units in question:

The Golem serves several very important functions in this deck. Ultimately it is the tank, but perhaps unusually it is also the main damage dealer. As discussed above, a combination of death damage and Golemite damage among the usual hit damage from both the original and cloned units actually creates quite a high DPS and is very hard to stop especially given that each time a Golem explodes it takes out and nearby small troops.

This is especially devastating against Minions as you can see in the video above. If I have a good push on, I will often wait until the Golem is pretty much at the enemy tower before cloning to ensure I get both of their death damage off on the tower and surrounding troops.

The other function of the Golem is that is obviously tanks very well so you can place your Archers or air units behind it and pick off incoming troops whilst you tank the damage.

The Clone spell is, of course, the other central card in this deck. Whilst Golem decks can be quite strong, they are a bit slow and can be countered easily if the opponent knows what they are doing. But with the clone you’ve suddenly got a completely different scenario as the cloned units are killing both troops and towers making it tougher to combat. In this combination as well, the Zap or Log spell are less effective as the Golemites survive the Golem’s death and the Zap initiates more damage from your cloned troop death damage.

The baby dragon is actually a very strong card in this deck – like a flying Wizard, it essentially helps take care of mass air or ground units whilst providing strong dps behind the Golem. Use this unit to back your Golem and Mega Minion up and try and get it in on the clone as well if you can.

Like most decks which currently contain the Mega Minion, it is used primarily as a utility card both in defence and offence. It’s perhaps your strongest defence against Royal Giants and is also strong against barbarians and other anti-Golem units. Try and have it just behind the Golem so it can protect it from the sky and just like the Baby Dragon, if you can clone it as well it will add very valuable DPS.

The Archers are your back up troops mostly used in a defensive capacity in this deck. Keep the ready to take down Graveyards and air cards. You want to keep them on hand until you think you really need them so it’s important to cycle through your deck until you have them available especially given the popularity of Minions and Graveyard at the moment. The Archers help counter these cards very effectively.

The Log is fairly self-explanatory. One of the greatest and most frequent uses of The Log at the moment will be to take down Skeleton armies surround your Golem. Whilst the death damage of the Golem will kill the Skeletons anyway, it’s better to have the Golem stay intact until it reaches the enemy tower so that its death damage isn’t wasted. Use The Log to keep small units off it to ensure this can happen. The other use of The Log will be to re-target enemy units such as the hog or Royal Giant. If they are targeted on your tower, put your tombstone down, use The Log and they will retarget the tombstone.

The tombstone is a brilliant defensive building because of the Skeletons it produces upon death. Whilst it is vulnerable to the enemy Log, it does provide momentary relief against enemy dps and completely invalidates cards such as the hog which will get eaten up by the towers and the Skeletons before it can do much damage to your tower. It’s also useful to have a few Skeletons backing up your Golem as they can help take out troops such as the musketeer by gnawing away at them whilst they are focused on the Golem. An all-round very useful building for defensive play.

Lightning is probably the least important card for this deck, it’s useful to have for chip damage on the enemy tower and to take care of sparky, witches and other mid-sized units but this can be swapped for pretty much anything else – I’d suggest fire spirits or potentially the musketeer if you want to change it round.

Thanks for reading/watching and if you enjoyed the video, please subscribe to Chucky’s channel – all support is very much appreciated! 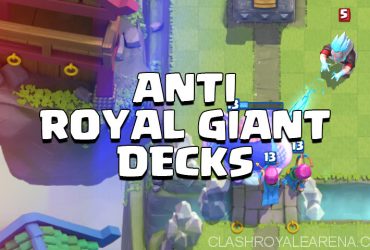 The Royal Giant is widely considered one of the most powerful cards within Clash Royale and as such, many medium to high level decks are focused around it. You’ll rarely … 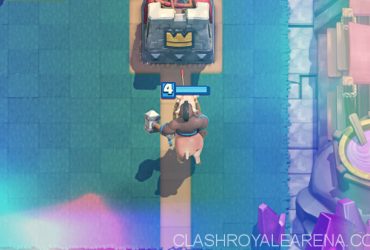 Hey guys, what’s up. It’s ya boi, SCorpSCilla, back at it again with my second ever deck on CRA, the Freezing Furnace Hog Rider for Arena 5 and above. This …