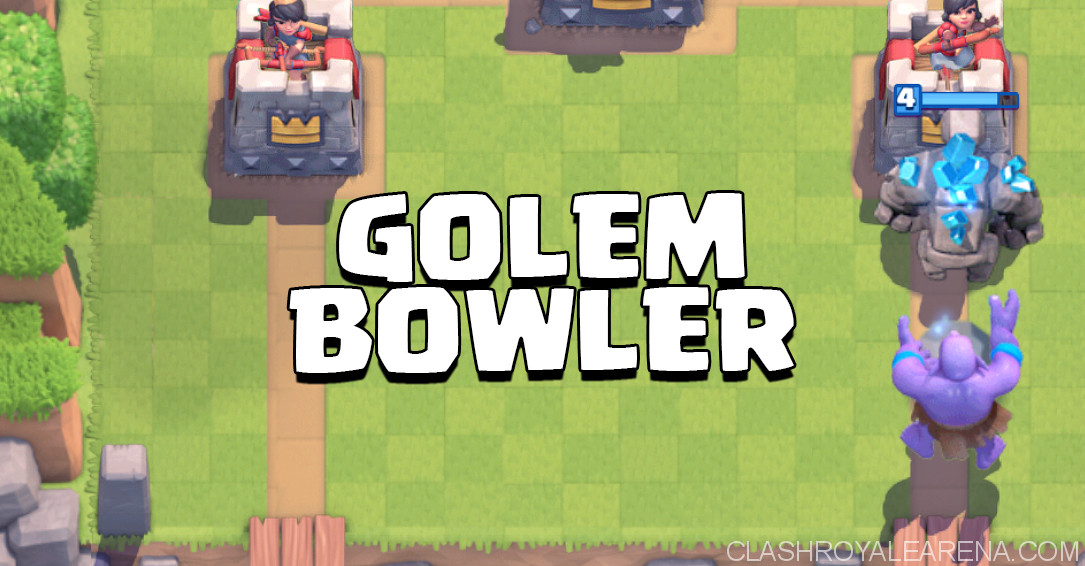 Golem Bowler Lightning Deck for Arena 8 and above

Bowler: With its pushback effect, the Bowler is extremely effective on both defense and. He works very well in the current meta as he takes out Skeleton Army, Hog Riders, Princess, Musketeer, Ice Spirit, Archers, Guards etc. Bowler is one of the best ways to deal with X-Bow/Mortar decks at the moment. He also does a lot of damage if he is left alone. Either I start the Golem from the back and put it behind the Golem or defend with the Bowler and put a Golem in front of it to defend. Not to mention, the Bowler can take out the Tombstone with ease.

Lightning: Lightning is obviously one of the best spells at the moment as it shred Bowler, Mini P.E.K.K.A, Ice Wizard, Mega Minion etc, which are the main parts of so many popular pushes. With 0.5s stun effect, Lightning is also excellent at dealing with Sparky Push, Double Prince push and especially Inferno Tower, the hard counter to our Golems in this deck.

Ice Golem: The Ice Golem provides really good HP for a 2 elixir card and he is great at distracting. The Ice Golem paired with the zap and take out the Minions/Minion Horde. And with his most recent buff, he can take out Skeleton Army which is seeing a lot of usage. You can use Ice spirits or log instead if you want.

Golem: With its most recent buff and Inferno Tower nerf, it has become the most used tank in the current meta. It has the highest HP in the game and probably one of the slowest troops in the game. Since it is so slow, take advantage of the speed to build a huge push. Like the Lava Hound, when it dies there are Golemites which have a decent amount of health which can tank for the Mega Minion, Bowler, Minions or skeletons.

Mega Minion: A great defensively card. For only 3 Elixir, his DPS is insane. With good HP, Mega Minion doesn’t die to most spells in game, except the Rocket and Lightning. It doesn’t get affected by the pushback effect from the Bowler. Excellent against Lava Hound as he kills the Lava Hound very fast as well as soaks all damage coming from the Pups. If you can get a Golem and Mega Minion to a tower, it will destroy the tower very fast.

Tombstone: Beside Inferno Tower, Tombstone is the most popular defensive building at the moment. With it flow of Skeletons, it can distract Mega Minions, Princesses and pull Giant, Hogs and Golem to the middle where both tower can take it out and Sparky. It can also be used offensively as the Golem can tank for the Skeletons. The most interesting part is, the Tombstone can be taken out by the Lightning but the Skeletons.

Zap is still one of the most useful spells in the game at the moment, beside The Log. Zap is excellent at taking out Spear Goblins, Skeleton Army, Skeletons etc. distracting your Bowler and Mega Minion. Zap + Ice Golem is great at finishing off Minion Horde. Also, when the opposing Inferno Tower is being locked on your Ice Golem, do the timing and play the Zap to pay more time, when you don’t have enough Elixir for Lightning of course. If you have the Log, I strongly recommend using it instead of Zap.

Minions: The Minions are mainly used for defense and offense and can take out a lone Musketeer and Bowler. It works great with the Golem because the Golem tanks for the Minions. Paired with zap, the Minions can take out Barbarians very fast. It can be replaced by the Archers

I like to start with the Tombstone, if it’s not in my hand, I try to cycle to it or I start the Golem from the back, it’s risky but I’m a risky player.

Giant Lightning: Giant Lightning is a popular deck in the current meta. If they start it from the back, I will start the Golem from the back so the Golem can soak the damage from the Mega Minion, Musketeer or Bowler and then use Tombstone and Bowler to take out the Giant and Mega Minion or Minions to take care of the support troops distracted by the Golem. And you can use Ice Golem to distract the support troops and slow them down.

Hogs: To deal with Hogs, I use Tombstone as a Tombstone can stop a Hog Ice Spirits, if you opponent put down a Hog without you having a Tombstone down or in your hand, use Mega Minion unless he has Lightning, use Normal Minions or Bowler as Lightning doesn’t take out Bowler or Minions.

Miner Bait Deck: Most annoying deck in the name by far. To deal with this deck, Bowler is important because it takes out Skeleton Army, Goblin Barrel and Miner. To deal with the Minion Horde, use Ice Golem and zap or Minions and zap. And Lightning to take care of the Inferno Tower/Furnace.

Hopefully you guys have found this deck helpful and can push further with it on the ladder. Just remember, practice makes perfect my friend!