How I get from Arena 5 to Arena 8 with GiWiVa! – Clash Royale Arena

Hi, I’m F▪▪▪▪▪▪O▪▪▪▪▪▪X and I am sharing a free to play deck I have used to push from Arena 5 all the way to the top of Arena 8! This deck becomes available once fire spirits and the wizard are unlocked. It has shined for me because I have been able to stay in the 2800 range as a lvl 9 with only Tournament Standard cards (Commons lvl 9 Rares lvl 7) while constantly facing lvl 10 opponents with lvl 11 Commons, 8 Rares, and Legendaries!

Giant is the main tank and used in most push scenarios. He soaks up enormous amounts of damage for the cards behind him and can lay waste to a tower if given the chance. At 5 elixir, while still a lot, it is a moderate amount compared to the .PE.K.K.A, Royal Giant, and Golem. While upgrading all cards is important, I strongly urge you to prioritize upgrading the giant to Tournament Standard before any other of the Rare cards.

Wizard is one of the main focuses in this deck. He becomes incredibly versatile on offense and defense because of his splash damage. He is much like a fireball that keeps on firing away! Due to his low health and slow hit speed tho he needs back up. His main use is offense when nicely tucked behind the Giant and or Valk. He can be used on defense for air troops or tucking him behind your tower so he can deal damage without getting hit himself.

Valkyrie is just what the wizard ordered. The Valk is a mini tank that has become my second favorite card in the game due to how she works so well in all scenarios. The Valk can take hits and trade them anywhere on the board. The Mini P.E.K.K.A could be a trade for the Valk but I feel the Valk has more use due to higher health and splash damage…the potential for a positive Elixir trade is great with her. She can be a tank on offense but mostly she is used behind the giant to guard the Wizard. On defense though, do not be afraid to throw her at almost anything that comes your way! Put her in the middle of a horde for the max potential but also use her to trade with Wizards, Barbarians, Witches, Musketeers, and other Valks.

Fire Spirits are my favorite card in the game because much like the valk the potential for positive elixir trades is high and the amount traded since they only cost two elixir is enormous. These guys work great for minion hordes and goblins but the best is surrounding a Sparky with these guys and getting +4 elixir out of it. This card is a must in all my decks because it provides a big hit for low elixir on offense and defense.

Spear Goblins are also I great versatile card. They are a lot like a weaker version of archers and regular goblins but can be used in more ways than either so that’s why I prefer them. While not used in my main pushes or my go to for defense they are a low cost card that you can throw in to chip away health or buy yourself time against single targeting cards like prince or Pekka.

Barbarians first and foremost are for defense in all but one instance! Barbarians do a high output of damage and when placed properly can defend for you against all but air troops. Due to how slow they are it is not recommended to use them for offense. Barbs just go after  giants, Royal Giants, Golem, Pekkas, you name it! The only time I use these guys on offense is when I know an inferno is coming so I can get my giant through.

Cannon is a great defensive building. Noted it doesn’t do the most damage but that’s what the barbs are for! The cannon is low cost and can help with it’d damage but the main use it has is to draw building targeting troops away from my towers and to buy time.

Arrows I know most people are wondering when I was going to throw zap in here since it is an undisputed favorite but… surprise! I use arrows instead! I suggest you don’t use arrows on goblins because it is a negative elixir trade to you and leaves you open to other hordes but all else is fair game! Arrows one shot minions and Princess which is a plus to me while also doing more damage overall to other troops plus building which has saved me where a zap wouldn’t have. Sadly, unlike zap, it doesn’t hit immediately so for the best use of them when you have a push going you need to have a good idea of where your opponent will place troops do you can anticipate.

The main push is Giant, Valkyrie, and Wizard. The goal is to place the Valk behind the King’s Tower once 10 elixir is reached. If done properly the Wizard and Giant can all be placed as well on your side with the Giant in front with the Wizard sandwiched between. The goal of this is for the Valk to protect the Wizard after the Giant makes it to the tower and then to tank furthermore for the Wizard after the Giant is defeated. Variations of the push can be made to include the Goblins and firespirits if the main push doesn’t work. For example, if the opponent surrounds the Wizard with Minions, Barbs, or Goblins don’t be afraid to follow up with Fire Spirits to deal with them. Or if a Mini P.E.K.K.A is used to kill the Wizard before the Valk can deal with it, throw in Spear Goblins to distract it. There is so much more to it so do not be discouraged if you don’t do well at first because it takes learning to figure out all the strategies that can be used here with offense. My last tide bit tho is if there tower is at or below 500 and they have finally figured out how to defend your push switch to the other side to distract them and then when they aren’t looking through in a Goblins + Fire Spirit combo to do quick damage.

As stated, for defense, the two cards used most are Barbs and Cannon. The Cannon is a go to against Hogs because it can easily deal with them and gain you an Elixir in trade. If the Cannon isn’t in your hand don’t be afraid to throw Barbarians at the Hog, they can also easily deal with it and give your opponent something to worry about afterwards. For everything else on the ground, throw Barbs. They slice through everything like nothing. Occasionally the Valk should be used, especially for hordes, Musketeer and others Valks. The Wizard can be thrown in for air troops or a last ditch effort and Spear Goblins also work great for Balloons, Lava Hound, or single targeting troops. Again there is a lot more to my strategies but you just have to learn for yourself by practicing.

This deck is strongest against Hog Cycles, Spawners, and Air decks.

I have found it lacking against Inferno Tower users and sparky (that’s just cuz I hate Sparky users in general). It also can be tough to go against Fireball and Poison users but you just have to learn how to draw those cards out.

Thanks for looking at my first deck I have submitted! There is a lot more on strategy for you to learn but I have gotten overwhelmed with how much I typed so far so you just gotta use it and learn. Good luck! 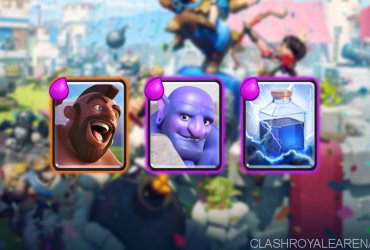 Hey guys, Yui here and today I am going to give you a Hog Bowler Deck that got me to 4412 trophies as a level 10. I made the deck … 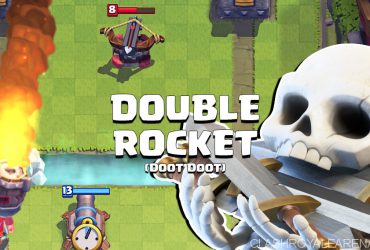 Hello clashers! This is KairosTime coming out with a deck guide on my famous All Skeleton Rocket Siege Deck! I made this deck while messing with my clan mates, and …