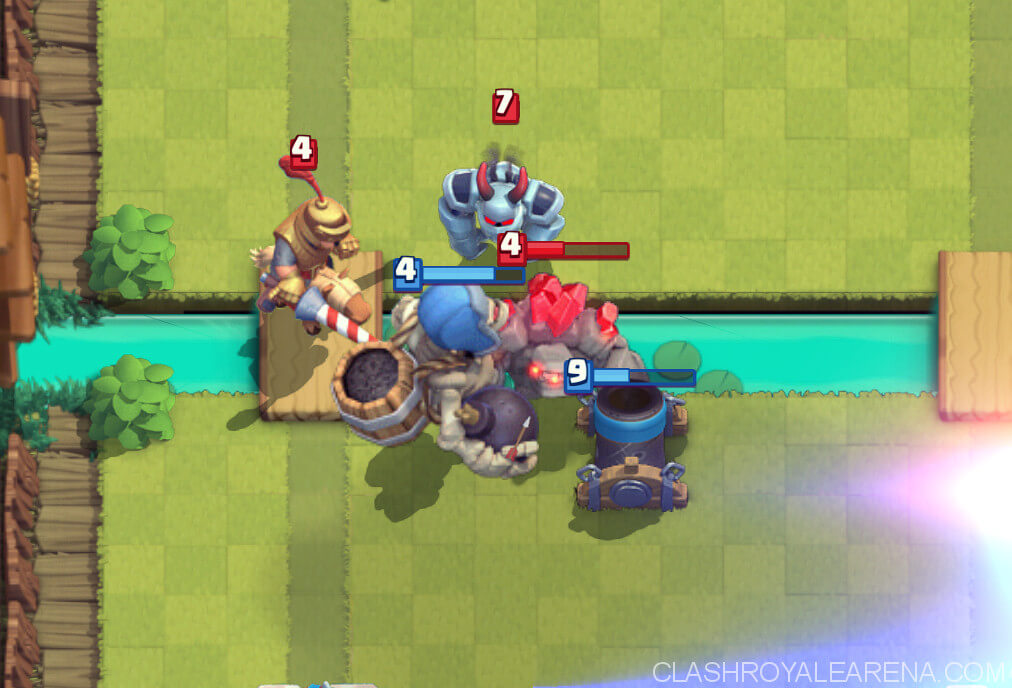 I have always loved ‘defend and counterpush’ type decks so I really love this deck.

It has a very strong defense, utilising two strong cards which synergise with Tornado, then after that you can easily counterpush with the Mortar!

The deck is a slow control/siege deck which relies on chip damage.

It’s quite easy to use, and very useful for new-ish players in the mid-high arenas.

This deck is also extremely off-meta and counters the meta (Golem, Hog Cycle/Bait, Classic Bait) quite well. Hope you enjoy 🙂

Giant Skeleton The tank for the Mortar/Exe and the beefy guy in the deck.

He has incredible synergy with the Tornado, making him a monster against Beatdown decks which are popular in both 1v1 and especially 2v2.

Sometimes, don’t even try to keep him alive. Just sacrifice him, plop him in the middle of the push and Tornado everything back!

The great thing is that he isn’t that level dependent. Above tourney standard though will obviously work better.

Once his bomb goes, you will probably get a huge elixir advantage and will kill everything attacking the Mortar as well.

You could even go for a big beatdown style push with this spooky steroid doot!

The Mortar is very well protected, don’t worry about that. The Giant Skeleton and Executioner together is probably one of the best protection/defense combos in the game.

Try to level your Mortar up, as the damage and HP increases significantly (max Mortar does 333 damage per hit. If you’re facing a lvl 11-12 tower (common around legendary arena) you only need 10-11 mortar hits to take the tower. Plus you have Fireball and your teammate will likely have a win condition!)

Mortar is very skill based as well- don’t just plop it at the bridge at the beginning of the bridge and hope it locks onto the tower.

Now you may think, this isn’t a challenge card! But you have so many other pressure cards that you don’t completely have to rely on the Mortar for damage.

Line him up straight so he splashes everything, and Tornado everything right before the support range troops hit him, but make sure the Executioner can still reach the Tornadoed troops!

He 90% survives Lightning/Fireball/Poison, but tourney Rocket will kill tourney Exe.

Guards are definitely better than Goblins/Goblin Gang/Spear Goblins in this meta after their buff.

Their shields are really useful (countering Royal Ghost if surrounded) and are also pretty decent at taking out a Mega Knight/PEKKA, combined with another cheap cycle troop.

They do well against Hog/Miner, popular win conditions in ladder/challenges.

All around versatility in a pile of bones!

They are great at lane control, and they have decent DPS for their meagre elixir cost.

For only 2 elixir (like Princess) you can easily gain elixir advantages, taking out Inferno Dragon, Minion Horde (if placed right) and finish off a Balloon.

They also do great vs Lava Hound as they can snipe the pups pretty well. Just make sure to have another backup anti-air unit.

These Spear Goblins are an all-around amazing card, like Guards!

Tornado: The first spell in this deck.

The Tornado is definitely one of my favorite cards right now, and one of the best defensive cards in the game.

You can activate the king, pull anything within the range of two Princess towers, and do much more.

The Tornado synergizes very well with three cards in this deck, Giant Skelly, Executioner, and Mortar. All on defense! How can anything get through this defense?

For only 3 elixir, this card is a force to be reckoned with (see what I did there?)

Plus, Tornado offers so much value, in 2v2s especially where there are a lot more troops to Tornado to the Giant Skelly bomb or Executioner’s axe.

Even though it got nerfed, it still works well in combination with Giant Skelly and Exe!

Fireball/Poison: This slot is open for discussion.

Poison works very well to complement your Giant Skelly pushes or on defense.

Fireball is more of a defensive cards to take out any pesky swarm or glass cannon.

Both are extremely useful to level up.

The Log is still one of the best Legendaries in the game! Killing Goblins, Princesses, Dart Gobs, basically squishy troops under 240 health (if using a Tourney Log.)

Use to complement pushes, in clutch moments, or to defend your Mortar as well!

Best starting moves: Guards split at the back, Spear Goblins at the bridge, or Log to cycle.

Don’t worry about Log punishing, just Tornado or use Executioner only if needed.

Get a feel for your opponent’s cycle, counters, defenses.

See if there is a regular pattern to their plays, and count your opponent’s cards.

This is very important! If they use their main counter to one of your troops, they need to cycle 4 cards to get back to that counter.

This is what differentiates pro players from amateurs (I would say noobs but that’s sort of unfair!)

Only use Giant Skelly on defense and counterpush with him.

Even if he is almost dead place a Mortar, and Exe/Guards/Archers to back up, because you can buy time (opponents won’t place troops into bomb).

The Giant Skelly can gain you tons of elixir advantages, especially with snowball pushes.

The great thing is that the GS isn’t that level dependent, as he is mostly about his bomb!

Executioner is a great support troop for Mortar, but watch out for Rocket value.

Tornado only when necessary and as often as appropriate, as you will just waste 3 elixir

Chip away at the opponent’s tower by Fireballing troops and the Princess Tower (Fireball+Tornado kills most glass cannons.) 1-2 Mortar hits is great per push (especially if you have a lvl 11+ Mortar.)

In double elixir, you have to overwhelm them!

Protect your Executioners with Guards or Giant Skeleton to cycle them/build them up, and since this deck doesn’t have a very high elixir cost (3.6) you can cycle Giant Skeletons and Mortars very quickly in double elixir.

Just cycle Spears at the bridge or Guards at the back/as a reactive move.

You could also just hardcore defend (i.e. turtle up with Mortars, use ExeNado/GSNado) and fireball cycle, if they have a hard counter deck.

Give your clanmate this deck, both of you use it in a 2v2, and watch the annihilation. Satisfaction guaranteed.

I will only be stating meta decks, as these are the most important to deal with. If you want to see how one should handle a Lava Hound Ebarbs deck, knock yourself out. Literally. Cause I’m not gonna answer to you xD Me so savage

2.6 Hog: This migraine-inducing deck has been consistently ruling the Hog Cycle world.

Fast and annoying in the hands of a skilled player.

Here’s how to deal with the classic (and best?) Hog cycle:

You should be able to recognise what deck they are running right off the bat if you see any of Ice Golem/Ice Spirit/Skeletons and a Musketeer.

Well, for starters, you have two Hog hard counters, Mortar and Tornado. Yay! Although Tornado will be less of a hard counter now due to the pull duration nerf.

Log cycle their Ice Spirit and Skellies and Musketeer (but don’t log only one of them) and also deal free chip to their tower. An experienced 2.6 player will NOT place their Musketeer at the back, to avoid an opponent hitting their musketeer and the tower, as they will try to prevent as much chip damage as possible to their towers.

They will often be going for a ‘Hog+Skellies/Ice Spirit+Musketeer remaining from defense’ push.

A hint that they will be going for a Hog Push is when they place their Ice Golem near the bridge, so pre-place your Mortar so you don’t panic and misplace it when you see the Hog!

Cannon+Musketeer is a surprisingly strong defensive combo. Oust this by hitting them both with a Fireball if possible! Fireball+Log the Musketeer they are defending with when you are attacking. Chances are they will also place Skeletons or Ice Spirit to help distract/defend.

Shouldn’t be too hard matchup, just don’t slack and try to keep up with the cycle/keep a counter in hand (if you don’t they will outcycle you and you’ll find yourself taking WAY too much unnecessary damage.

If you know their Hog is in cycle (by counting cards!) keep a hold of Tornado/Mortar!

Ladder is currently overrun by Golem Lumberjack! Golem Double Prince is still popular but less popular than before.

But seriously, in short, Golem is easy to deal with.

Hog Mortar is actually my ladder (and fave) deck! It’s super good in this meta.

Here’s how to deal with it when playing this deck.

Save your Lg for their bait troops when they use it with the Hog pushes. They will be pressuring with a Hog in front of remaining bait troops after a defense.

Exenado will be your saviour here.

Try not to waste Fireballs on Mortars on defense when you are trying to form a GS push, as they will go hard in with Hog+Horde.

You might not have enough elixir for Exe either in that case.

Executioner will crush all their bait troops doing defense, but don’t place it until you see bait troops, like Horde, so you can crush them and your Exe will be alive and healthy instead of a pesky swarm of Goblins piercing away at your Executioner, and you not having anything to deal with the Ice Golem kiting your Steroid Larry away and Spear Gobs killing him!

You will need to take a little damage in the early stages (they excel in single elixir) then punish mistakes, look for openings, and attack and overwhelm in double elixir/OT.

The (in)famous Lavaloon has made a slow and steady rise back to contention!

Long story short: Exenado crushes Lavaloon. Being invulnerable to Lightning (which will be popular in Lavaloon decks in the new meta due to Lightning buff), killing back support like Megas or Hordes or FMs due to frontal splash, all for 8 elixir, is insanity.

Once you see a hound in the back, plop a Mortar at the bridge. It will force them to either lose their tower or waste elixir defending.

Easiest matchup for sure. The defense is almost to the point of overkill.

That’s it for me guys, hope you give this deck a shot and rate it please! Drop a comment or send me an email at matthewseanlee@gmail.com.

Neb signing off. Until next time, goodbye!