Hello guys, today I am going to show you a very interesting deck which got loads of trophies last night. the Giant Skeleton Hog Rider Control Deck! 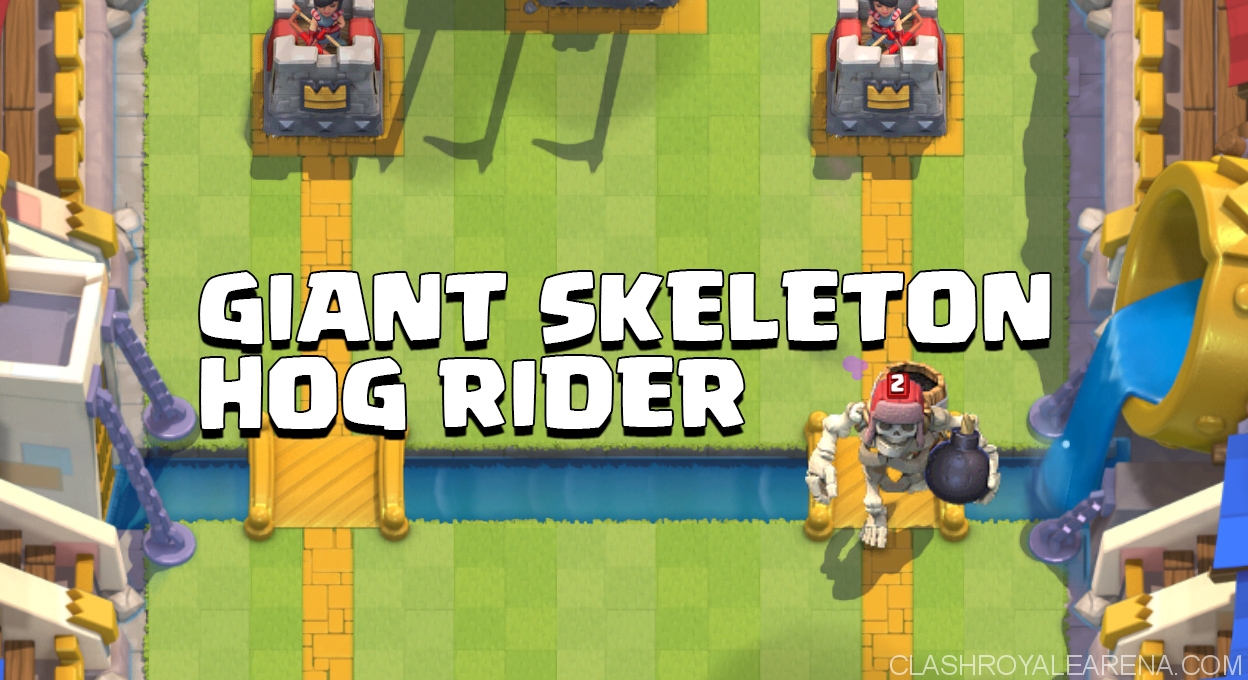 Generally, just wait until your opponent launches a big push then start counter pushing. Normally I can do at least 800 damage with the counterpush but sometimes If your opponent over-commit, it should be an easy Tower. Because this deck doesn’t have the Elixir Collector and its average Elixir Cost is 3.8, it’s recommended to play slowly. In most situations, I don’t recommend creating a push first because you will not have enough Elixir to either attack or defend. If your opponent doesn’t many any more for a while, drop any troop behind your King’s Tower.

Giant Skeleton is the tanker of this deck. Always place him behind your King’s Tower when you start launching a counter push. Just don’t think about it as a priority to get him to the Tower. His main job is clearing the path for your Hog. Drop your Hog Rider and Musketeer behind him to deal the guaranteed damage to the opponent’s Tower. He can protect your Hog from any defensive building, any troop and also the Tower. His explosive bomb can easily clear Cannon, Ice Wizard, Barbarians,… This makes him a perfect company for you Hog.

Hog Rider is the main damage dealer of this deck, of course. Just don’t always expect him to get hits on the opponent’s Tower, understand when you can win the game, otherwise you will lose because of over-committing. Couple him with Goblins to bypass buildings. Sometimes, you can pair him with Mini P.E.K.K.A for a strong counterpush. Sometimes, If your Giant Skeleton is not ready, you can use Hog + Fireball in a pinch. If your Hog is level 7, he can soak 1 hit from the Sparky, If you are wondering.

Mini P.E.K.K.A is extremely useful on both offense and defense. She can shred any tanker and can take down the unprotected Tower in just a few hits. She will help you deal with Hog Rider, Royal Giant, Wizard, Valkyrie, Golem. And there are tons of other uses which can be read at here.

Fireball is hands down one of the best spells in Clash Royale. With Fireball, you can finish off low HP Towers, remove Barbarians, Witch, 3 Musketeers, Princess, … Sometimes you can even use it on the Elixir Collector to keep the pressure on your opponent. Want to read 999 other uses of the Fireball? Please take a look at here.

Inferno is a new addition to my deck, I decided to put Inferno into a deck, after facing a lot of Lavahounds and Pekka Double Prince Decks. I usually drop Ice Wizard along with the Inferno to take out most pushes. Even if they zap, I drop goblins to distract until the Inferno gets max ramp-up time. I can do the same with Giant Skeleton.

Zap: What is the most used, what is the best spell in Clash Royale? This one! Its cost and the versatility make it one of the best choices right now for almost any deck. Use it wisely to take out opponent’s Goblins and Skeletons on offense, as well as give your Hog 1 more hit. Hover it on your opponent’s field on offense and release your finger to use it immediately.

Goblins are Hog Rider’s best friends. They will help your Hog bypass building as stated above. When you have a great Elixir Advantage, Hog + Goblins + Zap combo is enough to take the Tower down. On offense, use them to deal with Prince, Musketeers, Mini P.E.K.K.A, … When you are on low Elixir, they are a great choice to take down Hog Rider quicker, of course make sure that your opponent doesn’t have Zap in his hand.

Hog Rider: Place your Inferno Tower down. If your opponent uses Zap to reset its damage, after your Inferno Tower gets zapped, drop your Goblins down to kill the Hog Rider. If the Hog Rider is protected by Fire Spirits, Goblins, Skeletons or Minions, Zap them. If you don’t have the Inferno Tower in your hand, use Musketeer + Goblins to take the Hog quickly. Otherwise, you can drop your Mini P.E.K.K.A down, 4 tiles in front of your Tower, right when the Hog is about to cross the river, she can kill the Hog in 2 hits without moving.

Royal Giant: Drop the Inferno Tower down, reactively. Ensure it can target the Royal Giant. If your opponent drops other troops down, use your Musketeer or Goblins, depending on the situation. Don’t hesitate to Zap the support troops because they can ruin your defense any time.

Miner: He is definitely one of the most annoying guy in Clash Royale, but you can absolutely defeat him. But, against Miner, you need to practice a lot to locate him quickly. Then, you should place your Mini P.E.K.K.A down quickly and start launching a counter push right after that. It’s recommended to drop your P.E.K.K.A behind your Tower so If your opponent sends his Miner to either the left side or the right side, your Mini P.E.K.K.A. If your opponent also sends Goblins/Fire Spirits/Mini P.E.K.K.A in, don’t hesitate to zap then then use Musketeer/Goblins to defend. In the worst case, you always can use Giant Skeleton to defend.

3 Musketeers Decks: Use Fireball + Zap to finish 3 Musketeers and use Inferno Tower to take down the tank.

Giant/Royal Giant + Sparky: Save your Inferno for Giant/Royal Giant. Normally, you can take the tank down before the Sparky hits something. Use Zap on the Sparky right when she is on the bridge and place your Mini P.E.K.K.A down to take her out. If you don’t have Zap in your hand, use Goblins to soak damage then use Mini P.E.K.K.A. Just try to save your Zap and Inferno Tower ready to deal with this combo.

Giant Balloons: Use Inferno Tower to lure them to the center then drop the Musketeer down on 1 side to snipe down the Balloon. You will try to use the Goblins/Mini P.E.K.K.A to take the Giant down as soon as possible.

Hut Decks: Keep using Fireball on Huts. Also, considering pushing on the other lane with Hog Rider + Goblins once the Barbarian Hut dropped.

Lava Hound Decks: Inferno Tower can shred the Lava Hound quickly. You will want to place your Musketeer down to take down all other troops nearby. Don’t hesitate to Zap the Lava Pups.

Giant Poison Beatdown Deck (You can read more about this deck at here): Lure the Giant to the middle by using Inferno Tower, wait couples of seconds for the Poison then drop your Mini P.E.K.K.A or Goblins down to take down the support troops behind.

Okay guys! Thanks a lot for reading this guide. Don’t hesitate to leave any comment. I will do my best to answer them all!

Deck created and shared by T-Rex