Hey guys, today I am going to show you a new Giant Skeleton + Furnace deck, the new Meta Breaker. This deck utilizes Giant Skeleton and Bomber, which are going to be buffed a lot in the next update.

Giant Skeleton: He is tank, he is push stopper, he is the win condition of this deck. Unless you don’t haven any better option, don’t start your battle by using him as he is the surprising part of this deck. A Valkyrie and a building can simply take down your starting push, unless you have a Mini P.E.K.K.A supporting. If your opponent have troubles dealing with the rest of your decks, it’s recommended to use him on defense only. If your opponent plays a Sparky, throw him right in Sparky’s face.

Bomber: Great support for the Giant Skeleton. Bomber is super cheap comparing to what he can do, especially after the new update with 9% more damage. He can easily clear out Barbarians, Goblins and other small troops. Since he can’t target air troops, It is not recommended using him as the only support. Couple him with someone!

Fire Spirits: This card is just super useful in lots of situations, both offense and defense. They can easily deal with Barbarians, 1 hit Minion Horde, Goblins and swarms. On offense, place them behind your Mini P.E.K.K.A and you will have a very annoying sneak push. Want to see more uses of this card? Please take a look at this very long guide!
You can somehow replace them with Wizard If you want, in order to deal with air attacks easier.

Knight: Outstanding cheap mini tanker for you. It’s recommended to play him behind the Giant Skeleton. After your opponent troops get smashed by Giant Skeleton’s Bomb, he can deal lots of damage to the opponent’s Tower.  While using this deck, my opponent usually ignore a 50%HP Knight soaking damage for Spear Goblins and Bomber behind without noticing that they can deal incredible damage. He is also a great counter to the Miner.

Furnace provides us the constant support. Minions are the very hard counter to this base but Furnace will help you deal with them. When coupled with Spear Goblins, it can deal some nasty cheap damage too. Centralizing it will help you deal with Hog Rider. You can somehow replace it with Inferno Tower or Cannon but personally I found that the Furnace is the best choice for this deck.

Spear Goblins: Is your only air defense troop in this deck If you don’t use Wizard in stead of Fire Spirits. These guys are just super versatile as we can place them in every deck. Place them in front of the Furnace wave If you want to deal up to 600 damage to your opponent’s Tower, they usually ignore this the first time LOL. Also, Spear Goblins + Furnace is a great combo to bait our your opponent’s Valkyrie and Zap, this is extremely nice in lots of situations! In the x2 time, use Spear Goblins to help your Fire Spirits remove swarms faster If your Furnace is out of rotation.


Fireball: I have nothing to say about Fireball. It is just extremely useful. Don’t forget to check out this Fireball guide!

Mini P.E.K.K.A: Will help you deal with Valkyrie, Wizard, Royal Giant, Giant and other tankers. When coupled with Fire Spirits and Furnace, you will get 5 Fire Spirits following him and it’s enough to demolish any unprotected building. You can hide Mini P.E.K.K.A in your pushes to deal surprising damage.

Use one of these combos

Good luck. Hopefully you have enjoyed this Giant Skeleton and Furnace Deck! Don’t hesitate to ask me any question guys! 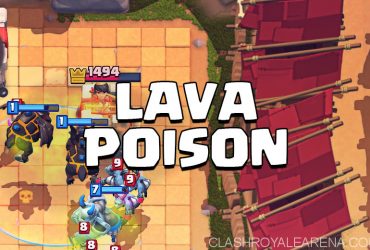 Hey guys this is NotCPU and today I’m going to show you my Lava Hound Poison Deck, which got me to 4k club in the last season. A little about … 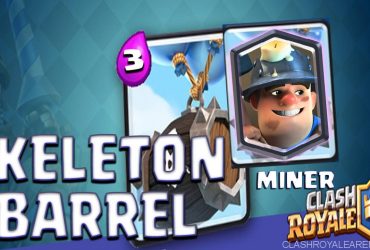 Hey guys! The Ice lord here with my 3rd guide! So I wanted a good miner poison deck, and after a lot of digging, I found this one on a …
Posting....