This is KairosTime with a very unique Challenge Winning Deck that utilizes the Clone Spell with the Giant Skeleton to blast your opponent’s tower to bits!

Not only is this deck a ton of fun to play, but it will keep your opponent on their toes and force them to be really creative if they’re going to stop you from taking down their tower! With the help of this guide, along with the Challenge Winning Replays in my video, you should be able to make this deck work very well! 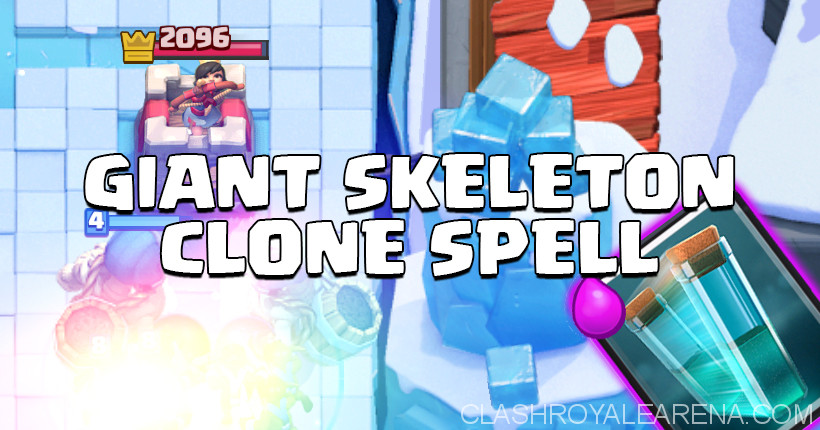 Giant Skeleton – The Giant Skeleton, paired up with the Clone Spell is a very strong win condition in the deck, but only if you use it at the right time! I will usually drop the Giant Skeleton in the back, behind my King’s Tower so that he’ll walk into the Left Lane (So that if I need to, I can clone skip to get him to the tower sooner. Until I’m ready to reveal that I have the clone spell, I’ll use the Giant Skeleton to stop massive pushes because his bomb is so strong at defending.

Clone Spell – In this deck, the Clone Spell is kind of like the Freeze Spell is in Hog Freeze. That means that you don’t want to reveal that you have it until it is too late for your opponent. It can be difficult to play with a 3 card rotation, but doing so is critical or your opponent will do anything to keep your Giant Skeleton from making it anywhere close to their tower.

More: Everything about the Clone Spell

Graveyard – The Graveyard is a secondary win condition. For the first half of the game, before you’re ready to reveal that you have the Clone Spell, you’ll want to try to take a tower using the Graveyard paired up with either the Giant Skeleton as a tank or the Ice Golem. If you do a good job at playing this card at the right time, you can easily take a tower down within the first 2 minutes of your match. Switch it for the Goblin Barrel if you don’t have it. Making this switch will take some practice but you can definitely make it a strong combo!

Ice Golem – The Ice Golem is such a versatile card. It’s great at distracting troops like the Musketeer or Mega Minion, and it can also be used right in front of your Giant Skeleton if your opponent has the Skeleton Army . This can help get your Giant Skeleton to the tower. If your opponent has dropped Archers in 1 lane, I’ll place the Ice Golem at the bridge in the other lane and place the Graveyard spell because it is unlikely that they will have another solid counter to the Graveyard and the Ice Golem will tank enough shots from the tower to give yourself a Crown.

Zap – While it can be switched with The Log, I prefer Zap in this deck because it helps out with air troops. If Minions are used a lot in your trophy range, I would switch it out for the Arrows but for right now, Zap seems to be my favorite.

Skeleton Army – Not only a great card to use on defense, but it can also be used on offense if your opponent has used all their spells. I don’t recommend using this push frequently, but it has gotten me a few towers when the option arose. If I have a tower down already and my Giant Skeleton is coming to the bridge, I’ll drop the Skeleton Army near the middle of my opponent’s side of the arena so that they’ll clear any distraction troops. This helps my giant Skeleton get closer to the tower.

Mega Minion – The Meta Minion is still an extremely strong card, and I imagine it will continue being really strong until the Dart Goblin comes to shoot it out of the sky! The Mega Minion is a great card to play on top of the Giant Skeleton once he makes his way to the Tower, and a cloned Mega Minion deals just as much damage as a regular one, so I really like to clone both the Giant Skeleton and Mega Minion to make it even more difficult for my opponent to stop the big source of calcium from making his way to the tower.

Furnace – The Furnace is such a great card in this deck because the constant source of Fire Spirits will not only apply a constant stream of pressure to your opponent, but the Fire Spirits also do a great job at clearing air troops, along with distraction troops. This card is yet another card that is included in the deck to help your Giant Skeleton make it to the tower. Placing it 3 tiles in front of the King’s tower seems to be the best place for it, especially when facing Hog Riders and Giants.

Lava Hound – This is the hardest matchup and so I wanted to make sure I talked about it right in the first. The trick to playing the Lava Hound is realizing that getting a Giant Skeleton to the enemy tower is just as big a threat as a Lava Hound at your tower is. That means that your opponent will either try their hardest to stop your Giant Skeleton, or they won’t be able to and will focus on attacking your tower. Either situation is good for you so make sure you drop your Giant Skeleton in the opposite lane and prepare to defend the other lane. Be ready with the zap if your opponent has distraction troops. If they play anything but distraction troops, clone your Giant Skeleton and the Clone’s bomb will clear them easily and pave the way for the real Giant Skeleton to make it to the Tower.

Hog Rider – This is not a super difficult matchup if you’re careful. Use the Furnace to apply pressure to your opponent. You’ll want to defend against the Hog Rider by alternating between using the Mega Minion and the Skeleton Army. If you only defend using one of them, your opponent will be ready with a counter so it’s important to switch it up. When Facing the Hog Rider, sometimes it is better to let the Hog Rider land a couple of swings on the tower while you build up a push. One of my favorite things to do is to counter a Hog Push with the Giant Skeleton. This will let the Hog Rider land a couple hits, but then you’ll be ready to counter with either a Clone combo or a Graveyard combo. In my video, you’ll see me easily 3 crown a popular Hog Log deck.

Tank Decks – If you play your cards right, any tank deck shouldn’t be too difficult to stop whether it be a Giant, Golem, or even a PEKKA deck. The Trick to playing against these decks is to use your Furnace as a distraction for the tank, and to use the Giant Skeleton’s death bomb to clear all the supporting troops. If you really need to, you can even clone your Giant Skeleton do absolutely destroy any push! While you use your Giant Skeleton to defend, you should be trying to take down the tower in the opposite lane using your Ice Golem and Graveyard. You’ll want to use your Mega Minion to help finish off the tank while the Giant Skeleton tanks for it.

I hope you enjoy this write-up and the videos included! Good luck on your next challenge!

This is KairosTime ticking by! We’ll see you in the arena. 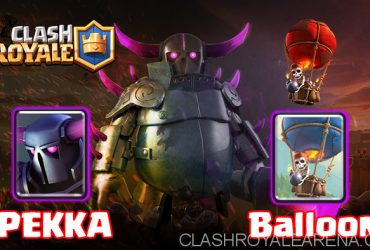 Hey! everyone, it’s Dart Goblin FTW(Regeneration) back after a short break with a new deck that I’d like to share. So let’s get into it! PEKKA Balloon Witch Fireball Tombstone Knight … 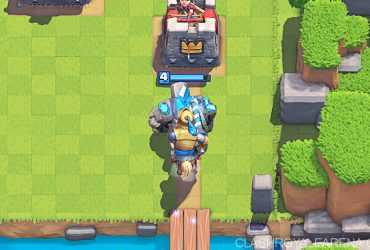 Hey what’s happening guys it’s Jaybros here, and welcome back to my 2nd guide. Thanks for enjoying my last one, and today I have a new Golem Beatdown deck for …