Hey guys it Cow FTW here for another guide! Today I am going discussing about INSANE Giant Double Prince deck which pushed my up tons of trophies!

At first I used this deck and immediately lost, and decided to give it another shot. I then won the next 5 matches before ending my streak with a draw!

This deck is great in ladder matches as you have lots of options for over leveled cards.

Well let’s get right into the guide! 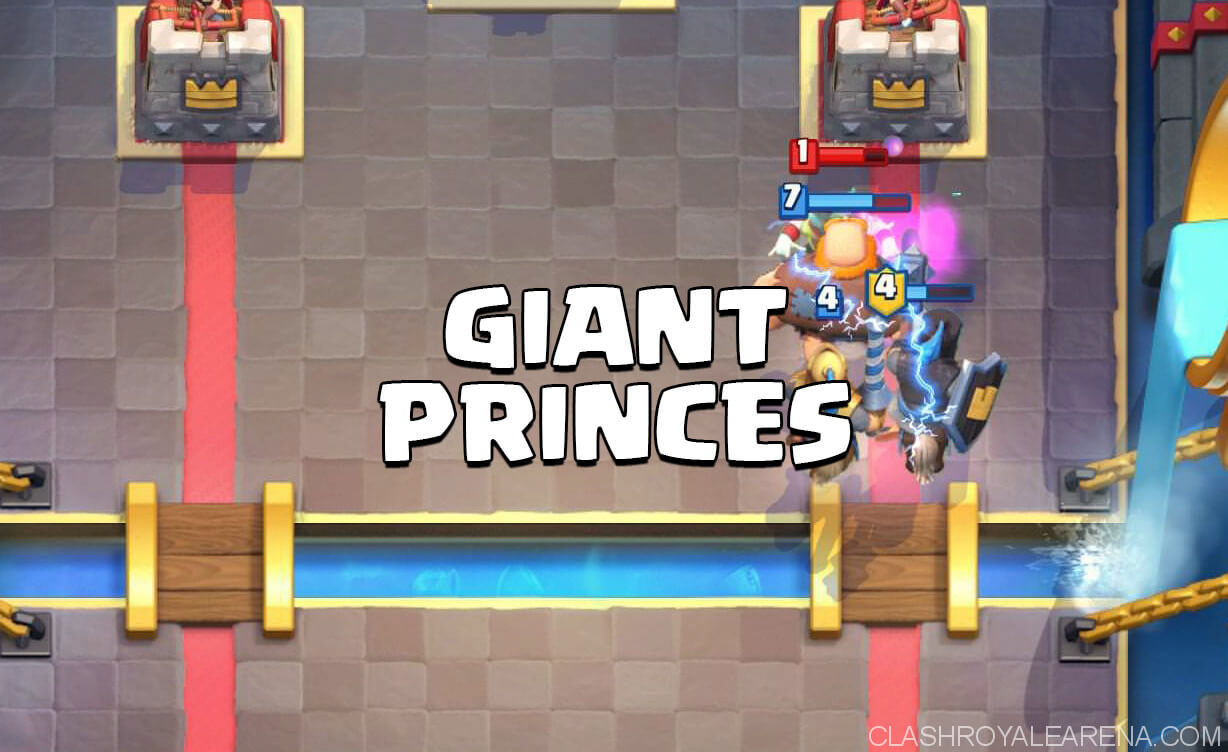 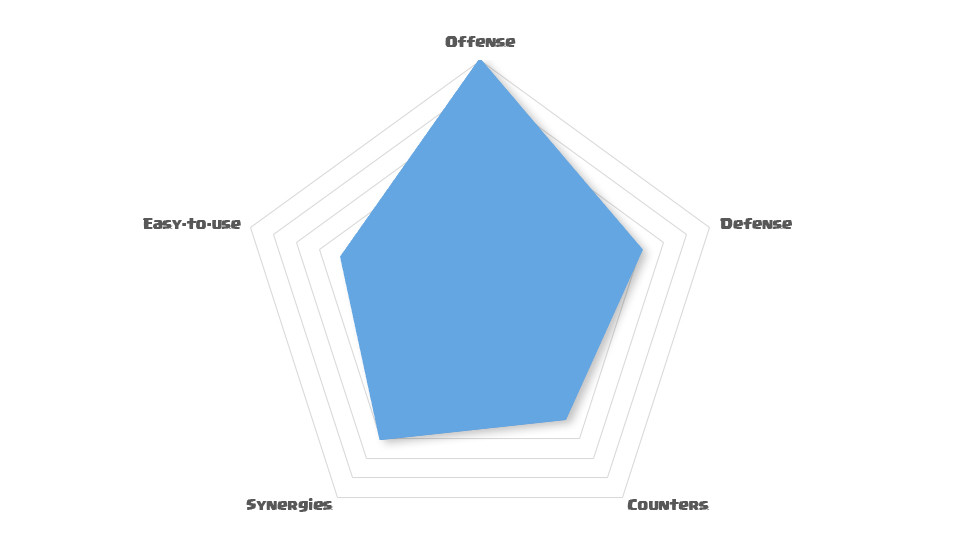 You want to use him in the back to slow roll a push, when you have a big elixir advantage, or your opponent has just use their main tank killer. (P.E.K.K.A., Inferno Tower, Etc.)

Ideally you will want to play him with both Princes and a support troop, but you can play him with really any troop in this deck and concocted a very powerful push.

If you’re desperate, you can always use him to tank some damage on defense if your in trouble or kite threats away.

Prince – Counter pushing is the name of the game with card.

Ever since his buff, he has seen lots of popularity and has been paired with tanks ever since.

He is as an amazing card on offensive card as well as defense, able to take care of countless threats!

Use him defensively to take care of heavy tanks and support by placing him behind the tank, allowing him to take care of the supports then charge over to the tank and take it down with ease.

Pair him up with Minions, Dark Prince, or your spells for a strong blitz/counter push.

Dark Prince – A pretty moderate card that without the right the card to stop him, he is probably going to reach the tower.

An absurd counter card to cards like Battle Ram, Goblin Gang, Barbarians, and many other cards.

Despite not always having 360 splash damage like the Valkyrie, he is still a great defensive card because of his speed, shield, and splash damage allowing him to be more versatile than his counterpart, the Prince.

After the semi-resent buff, the Dark Prince turned out to be good, but this deck really makes him shine offensively, being pair with the Giant or Prince for a power push.

These guys are amazing when paired with any of your tanks, clearing out swarms and providing air defence, permitting them them to deal massive damage.

A great card on defence, being able taking out tanks and defend air units,  making these guys are great fit in this deck.

An awesome addition for any beatdown deck, allowing you to get the Elixir Advantage and create a monster push.

Despite the massive nerf, the Elixir Pump still stands strong in any beatdown deck! Despite not being a very heavy deck, this card allows you to get the Elixir lead.

The Place it in front of your King Tower is always a good move if you have a few defensive cards against Miner, Goblin Barrel or other threats that could destroy your Elixir Pump.

You wanted to constantly Pump up and protect it until Double Elixir Time when you can make a massive push.

It’s alright to take a little damage in the beginning of the match if it means you can Pump up and get the elixir advantage.

Mega Minion – This guys is the key defender, allowing you to defend against flying threats and deal significant damage vs tanks.

Although he can’t clear swarm, he is great kill tank killers when behind a Giant.

Pair him with Arrows to take out swarms and allowing him to reach the tower.

He is your go-to cheap defense card when your opponent has Arrows or your Minions are just out of cycle.

Arrows – A great fit to this deck, filling in many gaps that other spell would miss.

Arrows allow you to kill ground swarms as well as Minions and Goblin Barrel for a neutral trade.

If you notice your opponent consistently places their swarm cards in the same or similar spot to counter your Prince’s, you can try to predict their swarms by playing Arrows. This a high risk high reward move so I wouldn’t recommend it.

Your heavy spell for finishing of the tower and getting good value on troops next to the tower.

Use Poison to protect your Giant or Prince’s from swarm or other defensive units and chip the tower.

When paired with the Prince, it makes a powerful combo, making it difficult to stop him from the tower

Pumping up is the name here.

If you have a Elixir Collector in hand, putting it down is excellent starting move as long as you have a air targeting and ground card so you are able to defend against Miner or other threats that might come your way.

For an example, if you have Giant, Poison, Arrows, Elixir Collector in you hand, chances are, you won’t be able to defend your tower or your Collector so I would recommend you wait.

However, if you have a defensive hand like: Prince, Mega Minion, Arrows, Elixir Collector, then you should Pump up once you hit 10 Elixir.

Your main goal is to Pump up, protect it, and don’t play Giant unless you have a massive counter push with lots of troops or you have just made a massive positive Elixir trade.

Now it’s time to shift your focus not mainly on Pumping, but now getting damage.

Start by defending a push and then counter pushing with Prince or Giant and use spells to support them.

However, if placing a troop to tank for those counter pushing troops leaves you Elixir less, then you should opt to save your Elixir and not play the tank.

By now you will hopefully know your opponent’s deck and now you should start to adjust to his play style.

Now depending on the match, you should either Pump up once more or slow roll a push and go in hard.

However, the situations will vary depending on whether you in a ladder match or not given the time.

Because of the time, in ladder matches you should slow roll pushes with Giant and also counter push with both Princes.

Combine Giant with support troops to make a large push.

If you feel like they have overcommitted on offence or used their main defence against you Princes, rush a lane with both Princes if you have enough Elixir.

Overall you want to create a Giant push and trample them with a massive push when you have Elixir lead.

Good old log bait, a classic deck for that everyone is familiar with and it is extremely annoying.

Over a simple and easy matchup if you play smart.

Dark Price is great for pushes like Knight + Goblin Gang while you should save Arrows for their Goblin Barrel.

Poison their Princesses if their next to the tower, but she shouldn’t be much of a problem because Minions are your only squishy troop in this deck.

Make sure you place your Elixir Collector in FRONT of your King’s Tower so you deny your opponent Rocket value of tower + Collector.

Don’t let them Pump up!

You should be constantly Pumping up and try to Poison their Collectors.

If you don’t have poison in hand or you feel like it wouldn’t a save play, (Against Golem Three Musketeers or something) than punish them with a double Prince push.

When they place Golem, you should always try to rush the other lane and try to get damage.

However, if you don’t have both Princes in hand or you have just used them, you can either place Giant at the bridge + a support unit, or you can place your Giant behind your King’s Tower on the opposite lane and when it hits the bridge, add Mega Minion or Minion to the push.

Doing this applies pressure and maybe a tower trade if needed.

Drop the Prince to kill the Giant and tank then use Mega Minion to kill the supports and help with the Giant.

If your defending troops still have a lot of health, it is rarely a bad idea to drop your Giant in front of those troops a make a counter push.

However don’t place the Giant if it won’t tank for all the counter pushing troops or if you don’t believe you will be able to defend their counter push.

Try to place as many Pumps as possible, but focus mostly on counter pushing.

Logicly it should be an easy match up.

You have Arrows for their Minion Horde, Poison for their Musketeers and you can Pump up when they do too! But when you face a good Three Musketeers player, it really puts your experience to the test.

Save your Arrows for their Minion Horde and nothing else!

Use your Dark Prince to kill their Goblin Gang and to protect your Pump.

Try to Pump up as much as you can, and punish their Pump with a Double Prince push which usually will be very hard for them to stop if you have Arrows for their Minion Horde.

Your goal should be to constantly Pump up, not allowing them to get the Elixir Lead and get good value with your spells.

Well guys that it for this guide! Thank you for reading and I hope you give this deck a shot!

Sorry for not posting any guide sooner, I have been pretty busy lately!

Have a great day! – Cow FTW