Hey guys this is Giant Poison FTW and this Giant Graveyard NW deck is the first part of three-part set of meta decks I will be writing guides on.

Currently, Giant, Graveyard, and Night Witch are extremely strong in the meta, and this Deck utilizes all three of them making it extremely powerful. Let’s get into it! 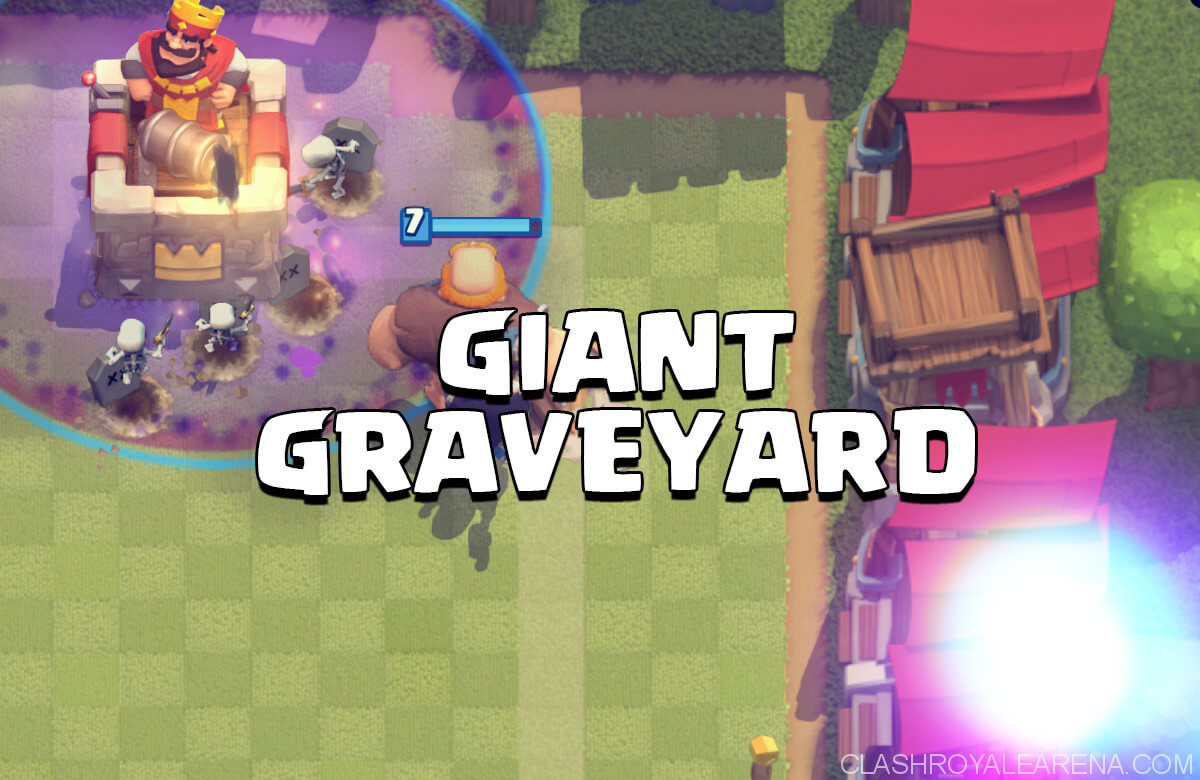 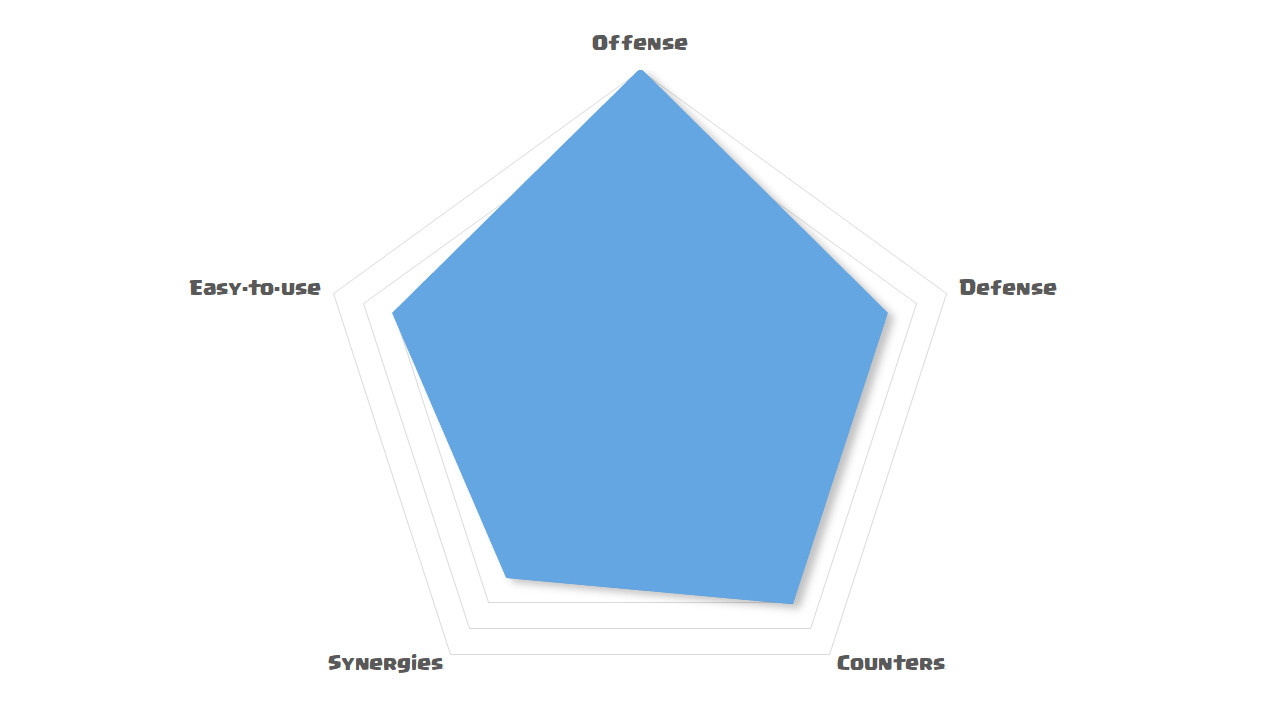 You will use it to make pushes with your Night Witch and Electro Wizard, and also tank for your Graveyard.

For only five Elixir, it offers an insane amount of health and damage.

Generally, you will want to build up a slow push with it by starting it at the back, then adding support troops along with, or play Graveyard when the Giant is at the bridge to deal insane damage.

Graveyard: This is your secondary win condition.

If the opponent does not have the right cards in hand, this spell can completely take the Tower.

It is almost never okay to play Graveyard by itself, instead you should always have something tanking for it and a spell to take out the opponents counters, otherwise it will be a wasted five Elixir.

Usually you will play it when the e wiz/Night Witch/Giant is at the bridge and you have a spell in hand.

Night Witch: Despite the nerf, the Night Witch remains one the top support troops in the game.

Because of it being extremely strong on both defense and offense, and the fact that it builds up a huge amount of Bats while behind a tank, it makes a push much more potent and hard to deal with.

Night Witch can be used to shut down tanks like Giant, and Hog riders, along with fully shutting down Graveyard.

After defense, you can throw a Giant is front of it and you quickly have a very powerful counter push against your opponent.

Electro Wizard: Another great support card, it is great to pair with your Giant and Graveyard. It is also a superb defensive troop, singlehandedly able to stop a Hog and a Balloon.

Usually, I use it as a support defensive troop to stun the opponents push to give the main defensive units time to take the push down.

After the push has been stopped, throw a Giant in front of it or use it to tank for the Graveyard, a push that can deal huge damage.

Fireball: Fireball is one of my favorite spell as it offers so much for just 4 Elixir.

It can take out pesky Archers, Wizards, Musketeers, Night Witches, and other counters for your Graveyard, while also clipping the Tower for extra damage and allowing massive damage for your Graveyard and Giant.

Make sure you always get the maximum value out of the Fireball!!

Arrows: Arrows are your secondary spell.

They are used to take out Minions/Horde, Skeleton Army, Goblin Gang, or any other swarm that is used to counter your Graveyard or Giant.

Not much explanation needed, just save your Arrows and use them wisely.

Goblins: After the Skeleton nerf, I have started to use Goblins. The fact that they can survive an equal level Zap is extremely handy when using them to finish off an openers Giant, Hog, glass Cannon ect.

If you are sure the opponent does not have his/her Fireball, Poison, Arrows etc. in hand, then you can use it to fully shut down Graveyard.

Mega Minion/Minions: This is your main defensive air unit. Use it to take out balloons, giants, hounds, and other tanks with the assistance of a Night Witch or e wiz. You can counter push with it by using a Giant and having a spell in hand to deal some decent damage.

At the beginning of the game, I like to play passively to see what kind of Deck the opponent has, and namely what counters he has to Graveyard.

Usually I will defend the opponents push during single Elixir and counter push with Giant, getting some good damage in.

Once you are sure of the opponents Deck, you can start building up a push when you are at ten Elixir by starting a Giant in the back. Put Electro Wizard and or Night Witch to support the Giant, and then play Graveyard when at the bridge.

If the opponent has Valkyrie, make sure she targets the Giant before you play the Graveyard.

If you have both a Giant and Graveyard going at the oppenets Tower, they wont know which to deal with and you will deal massive damage.

You should have a decent bit of damage to the oppenent’s Tower.

In Double Elixir you will be able to make multiple Giant Graveyard pushes to finish off the oppenent’s Tower.

If you need to take a second Tower, place you Giant in the pocket and an e wiz/Night Witch at the bridge, then place your Graveyard. This will result in huge damage and most likely a second crown.

Lavaloon: This matchup is not too difficult, when they place their hound, rush the other lane with Night Witch + Graveyard. When the Lavaloon push is coming to your Tower, use Mega Minion/Minions + e wiz to take care of the Balloon and then the hound, then counter push with Giant. You also if necessary have Arrows for the Lava pups.

3M Pump: This matchup is easy. When the Pump is placed, rush with Night Witch + Graveyard to deal decent damage and take out the Pump. Always Fireball the Three Musketeers, and you have Electro Wizard to take out the Battle Ram.

Splashyard: This is an extremely easy matchup, as they don’t have much to deal with your Giant and Graveyard. Even if they take one Tower, this Deck cane easily take two, while that Deck can’t. You have Night Witch/Goblins, and e wiz to deal with the Graveyard and tank, and then counter push with Giant.

Golem Nightwitch: This is the hardest matchup. When the Pump is placed, rush with Graveyard and Night Witch, or if the Golem is placed, do the same. Do not let them Pump up! The key is to take and early Tower, and have them split up their push. Use Night Witch and e wiz to deal with the Golem and support troops, just watch out for lighting. This Deck is hard because of Lighting.

Overall this Deck is a really fun one to play and has given me a lot of success at 3800. Tell me how you like it 😀 and any suggestions!!!