Yes, it’s me, HiPeople MC back at it again, trying to make a new Giant Beatdown deck. 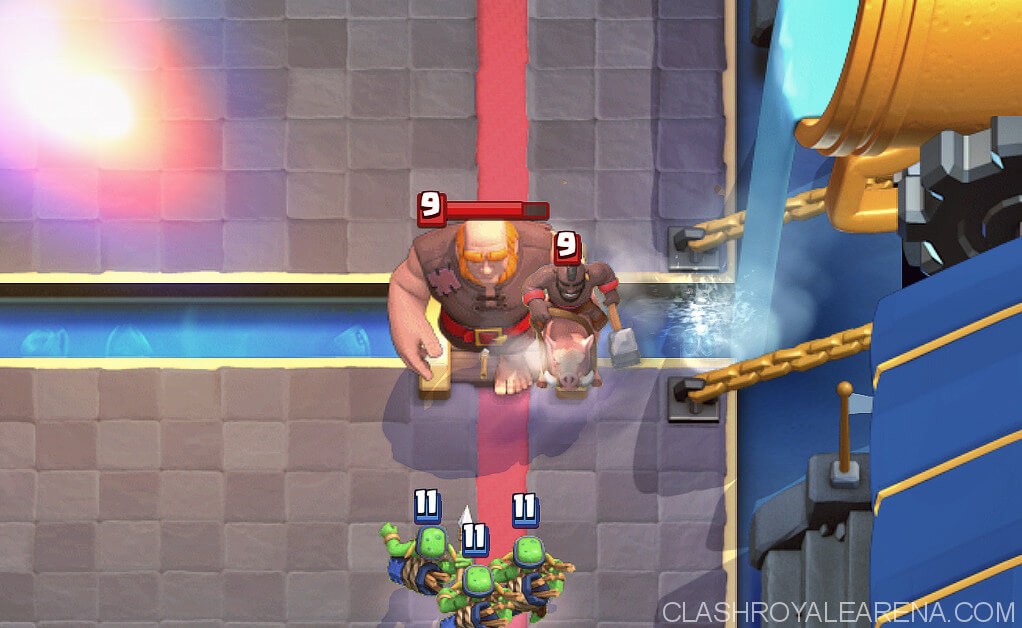 How could you build a Giant deck without Giant? You don’t.

Anyways, Giant is your primary win condition and can also be used on defense.

The most fun punishment, that, for four elixir, can almost demolish a crown tower.

Hog is your secondary win condition and synergizes with most spells, including two in this deck (well, one works better than the other)

Dart Goblin: Once I started using this thing, I realized how powerful it is.

Dart Goblin can deal easy chip damage, getting two shots off at a tower if it has 1 HP left!

Anyways, Dart Goblin is supposed to be a defensive card here, and can also be a logbait.

For example, even though using this deck, logbait is useless, in 2v2 your teammate might have that logbait deck we all know about, and if both your opponents have log, well, you’re your team’s only hope…

Flying Machine: Yes, put some wings on a Musketeer and you got the next card in this deck! (well, the Master Builder isn’t stupid, if he was, he wouldn’t be a master builder)

Flying Machine is a card that is underestimated, because you can do the double pressure with it, where you place it in the perfect spot to defend one lane and then attack the other for chip damage.

art Goblin is also good at this.

Electro Wizard: The hardest counter to Sparky and Inferno Dragon, EWiz is a troop that can stun and retarget enemy troops and buildings.

It fits into this deck as a protection for your Giant from Inferno cards and Sparky.

It also can slow down the Crown Tower (the Ice Wizard does better at slowing the tower, but it can’t be a hard counter to Sparky, Inferno Tower, or Inferno Dragon) and retarget troops, if they’re close enough, to the Giant instead of itself.

Remember to utilize the spawn damage to its maximum, perhaps to kill swarms or to reset targeting.

The building of this deck, and probably the best defensive tower in the game.

Inferno Tower can melt opposing tanks down to nothing, but make sure to protect it from EWiz or Zappies, because those electrocute Inferno Tower.

Zap: My favorite spell (well, my only max level card is fun to use to trigger owners of level 12 Goblin Gangs).

It can stun enemy troops or buildings and it can make most swarm cards instantly die or so that the Crown Tower can shoot it down easily (Crown Towers are a powerful defense you get for free!).

It is a versatile card that can fit into any deck from Golem 3M Beatdown to X-Bow to my Mega Hog deck.

It, for 4 elixir, can stop entire pushes, along with Zap (a 6 elixir combo), can kill Three Musketeers (tournament level), and is a more expensive alternative to stopping swarm cards!

But keep in mind, you only having two spells mean spell bait decks have an advantage on you.

Try to stop your opponent from taking any towers.

Use Inferno Tower to melt away Hogs and tanks.

Watch out for decks with tanks and Hog (aka… well u know my mega hog deck already) because that’s two things you need Inferno for and it can only target one thing at once.

So perhaps use Flying Machine + EWiz on Hogs and Inferno Tower on the tank.

Try to learn their deck and how they play it, so you can adapt to their playstyle.

Keep in mind that if they are using 3M Pump, and you Fireball the Pump, you might be in for a bad surprise.

Try to not lose a tower or use Giant to tank for your tower against troops like Miner, Mega Knight, or Zappies (if your opponent likes off-meta) to minimize tower damage.

If you can keep a tower during *1 elixir time, *2 elixir time is the time to…

If you have a tower, all you should care about is defending.

If you have two towers, you might as well go for a third.

Keep in mind that your opponent, if both of you have 1 tower, is probably going for tower #2 instead of the King’s Tower

If they have an advantage of 1-2 at 1:00, go for the second tower to try to force it into overtime.

If you are doing a tournament and overtime lasts ages, go for a “one tower above your opponent” win instead of mindlessly trying to three crown them (unless their King is at 600 HP, then who cares? You do have Fireball…) while killing your defensive abilities, and your elixir.

Remember, you have a Giant that can function as a meatshield (using my real life friend’s in game name ftw) for your tower, and this strategy is especially good if they have zero towers.

Overall, try not to lose a tower during *2 elixir time.

You have Inferno Tower, you have EWiz spawn damage for skarmy, you have Fireball for the Minion Horde.

You have Flying Machine chip damage and Dart Goblin double-pressure (placing a Dart Goblin on the perfect tile so that it defends a troop on one side then runs to the other side to get chip damage) strategy.

But please, don’t kill me on ladder with this deck.

One will win, one will lose

It’s up to mainly three things:

But skill is better than high leveled cards (this shows up in my ladder fights a lot; my only maxed card is Zap, but I still find a way to halfway up League I) as high level cards don’t determine how good a player is, it determines how rich Supercell got from their credit card (or their mom’s).

Your starting hand could be just spells, Inferno Tower, and Hog Rider, while theirs could be Giant, Tower, Zap, and EWiz.

If they use a 3M deck, defend with your life, then cycle back to Fireball.

For Double Prince, Giant can also be used for defense, along with Flying Machine and Dart Goblin.

Inferno Tower on the Ram, Dart Gob on the Bandit, EWiz spawn on the Gob Gang, and Giant+Overleveled Zap to kill their tower.

Not much else to say.

You have two spells, a Giant, EWiz spawn damage, Inferno Tower, and Flying Machine to counter this.

Hog Rider and Dart Goblin can chip damage their towers.

Just hope their Goblin Gang is 1 or more levels under your Zap.

Also, Hog+Fireball is surprisingly powerful, getting some Fireball chip+defense for the offense.

Other than that, Hog on one side, Giant on the other when you have 9 elixir, they will hog punish you and you have Dart Goblin or Flying Machine to defend.

During *2 elixir, you will have the upper hand, so not much worrying.

If they play Golem in the back, Hog or Giant will work as a punishment, or you could chip with Flying Machine or Dart Goblin.

Try to be offensive for a while after they play Golem so that they don’t have elixir to play support for the Golem so you can Inferno it.

Fireball+Zap, must be well-timed, and… Giant+Hog at the bridge with Dart Gob.

Make sure to keep Flying Machine handy for killing their pump so you still have Fireball.

If they play their pump behind a tower, don’t go for it. It’s just there for baiting out your Fireball.

If they use Inferno Tower/Dragon, Zap will keep your offense alive a bit longer.

Fireball can be used as a utility card, defense against mini-pushes, or as chip cycle when their tower is below 1000 HP.

Zap is the answer, but since they probably will clone their GS when it’s at the tower, try to place Giant to distract the clone to go away from the tower, then Zap it.

For the original GS, you have Inferno Tower, Dart Goblin, and Flying Machine, along with an EWiz to distract and stun it.

Giant on defense. Hog to kill towers. Flying Machine kills spawners easy, and can then provide chip damage. Dart Goblin can kill Tombstone or Goblin Hut (he hates his own kind if they did not have years of didgeridoo lessons like him) pretty well.

EWiz takes down Tombstone if he’s defensive (Knight+Tombstone is surprisingly scary; it’s like a slow Graveyard). But either way, not too hard.

Flying Machine and Dart Goblin counter Graveyard better than Zap because it doesn’t let it do much damage since it kills the Skeletons as they spawn, unlike Zap where it isn’t like Poison where it takes time to work and keeps Skeletons from spawning.

After covering all these matchups, I think you should be able to use this Giant deck with ease against almost any deck.