Hey guys, what’s up! It’s Cow (known as Cow FTW in the comments) here for my second deck guide!

This is a deck I am very proud to share with you guys! This is awesome Giant Graveyard that pushed me up 400+ trophies to Hog Mountain and my Giant is only level 5!

This Graveyard deck is amazing no matter what arena you’re in because it doesn’t have any Legendary other than Graveyard!

I obtained Graveyard before the buff and started looking for a good Graveyard deck I could use. I found this deck, made a few adjustments, and immediately fell in love with it! I will now stop ranting will stop and let’s get to the guide! 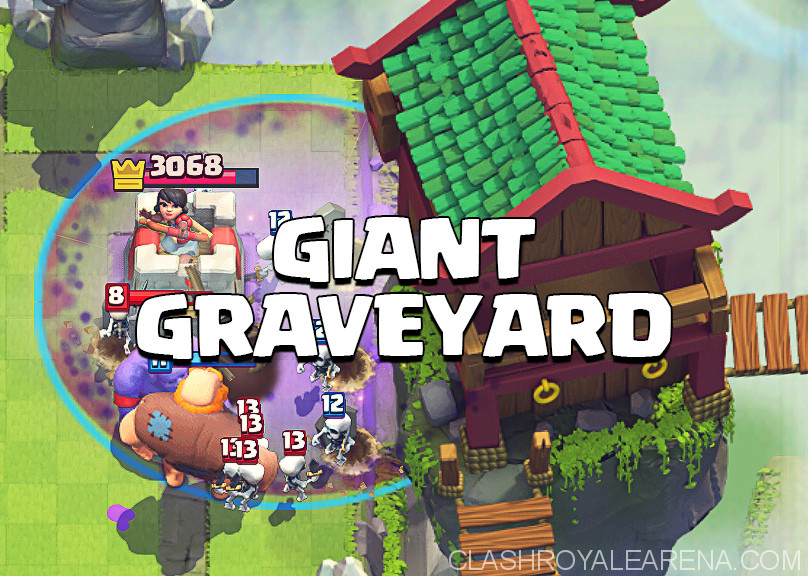 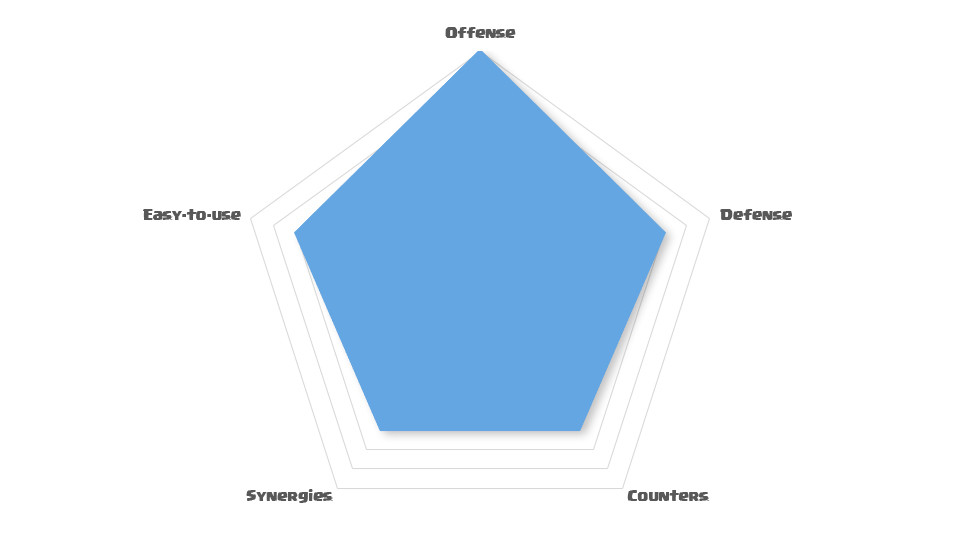 Giant – Your main tank and half of your win condition!

Place him in front of weak troops for a strong counterpush and to deal some great damage!

For 5 elixir this dude has crazy hp and good DPS and when paired with Graveyard, makes a deadly combo for only ten elixir!

Even though Graveyard is your main damage dealer, this guy is great at dealing damage when paired with other troops.

He synergizes very well with Graveyard as well as Bowler, however, this deck doesn’t have any air splash damage, so it is important that you pair him up with a spell or an air targeting troop.

Graveyard – After the balance change, Graveyard was buffed and nerfed simultaneously, but, in my opinion, Graveyard is loads better.

Even though Graveyard doesn’t dominate the meta like it once did, it is still a fairly good win condition.

Your main goal with Graveyard is to deal damage (Duh!) but you can also play it as a pocket card, keeping track of their Graveyard counters.

Then at the right time, you can place to tank, then place Graveyard, and if left ignored, can easily take a tower.

Even though Graveyard will do some great damage, never use it alone or it will be very easily countered and then your opponent can counter push with the remaining troops.

It is important that you know when to place Graveyard because if you place Graveyard and leave yourself elixirless, than your opponent can counter it with ease and counter push, dealing massive damage.

Skeletons will not hit the King’s Tower if you place the Graveyard like this.

Bowler – A classic in so many Graveyard decks!

This dude is awesome in this deck and fits perfectly. His ability to defend while having so much health, his piercing attacks, and his synergy with Giant and Graveyard makes him a perfect match for him in this deck.

He is an awesome card in ladder that dominates so many popular win conditions including Elite Barbarians, Hog Riders, X-bow, and many more.

He is a key defender in this deck but he is also one of your tanks for Graveyard. However when forced to choose between Giant or Bowler for a blitz push, use Giant.

Mega Minions – One of you 2 air DPS units.

Despite his good HP, I wouldn’t use him as a tank to for Graveyard unless you have nothing else in hand.

He is great in Giant push, taking out tank killers and if left ignored, can deal devastating damage behind any tank.

Musketeer, that card which you all get those early arena and quickly replace.

But why use Musketeer in this deck? There are so many other options why this card?

Here’s why: Unlike Electro Wizard, Baby dragon or Night witch, Musketeer provides the air DPS needed for this slot. It provides a second option for air defence, allowing you to use your Mega Minion offensively.

Now about resetting attacker like Sparky or Infernos you have Zap.

Goblin Gang is pretty self-explanatory. Use them to defend against hard hitters, surround those splash attackers, tank some hit as the Spear Goblin chip, go for some chip damage, and list goes on.

When using Goblin Gang to defend against Elite Barbarians, Prince, or Hog Rider, mix the placement so if they play a prediction Log it won’t hit anything.

Use it to take out swarms that will kill your Giant, or Bowler, protect your Graveyard, or reset that Inferno Tower.

Now I use Zap instead of Log because it can hit Bats, which is a hard counter to Bowler, Giant, and Graveyard.

It also gives better protection against Inferno Towers, which is a big problem in this deck having two big tanks!

Use this spell to take out troops next to the tower or finish the tower itself off.

Even though there is lots of synergy between Poison and Graveyard, I picked use Fireball for one reason: Minion Horde.

Minion Horde is super hard to deal with in this deck and hard counter literally everything in this deck.

Now, even though Poison is able to counter Minion Horde, it takes it’s time, and by then, you push is already obliterated.

Early in game you should mostly defend.

Use Bowler, Mega Minion, Musketeer, to minimize damage and then place a Giant in front of all the counter pushing troops.

Don’t be very aggressive with Graveyard unless you’re punishing your opponent for using Elixir or you have big counter push with Bowler or Giant to tank.

It very important that you save Elixir for a Giant to counter push, however make sure you don’t take lots of damage.

Now that you have defended, it time you start getting more aggressive, slow rolling a Giant in the back to make a big Graveyard push is ideally what you’re aiming for.

By now you should also know some of your opponent’s Graveyard counters, so keep track of them and adjust to the way he counters you pushes.

He uses Minion Horde to counter your Bowler? Keep Fireball ready next time.

Now you are going to start getting really aggressive, putting up a strong defence so you can counter push with Graveyard to get some damage.

Now you are going use Graveyard on counter pushes, trying to get some damage in.

Keep being aggressive but don’t get caught Elixir Less or your opponent could easy rush you and grasp the win.

Keep pushing with Giant + Graveyard if you opponent plays a heavy troop.

Keep fighting till you can get that win.

You have Goblin Gang and Bowler along with Mega Minion to deal with the Hog Rider.

If you place a Bowler directly in front of your tower, it only allows the Hog Rider one hit on you tower.

Even with a tank in front of the Hog Rider, Bowler still works as a great counter.

If you need to counter the Hog Rider with Goblin Gang, make sure you have another counter just in case you opponent Logs.

Use your damage dealers!

Because Giant isn’t very heavy, you shouldn’t punish with a Giant Graveyard push when the place Giant because your opponent would still have plenty of Elixir to counter it and then they can make a strong counter push.

When defending, place you Bowler in such a way that it his attack can go through the Giant and hit the supports.

However you will need something more than just Bowler to take down the Giant or else it will deal loads of damage.

When faced with this match up, in order to get damage, you must focus on counter pushing.

When it hits double Elixir, don’t be afraid to stack all those troops defensively to take out their Giant and take as little damage as possible.

Use Fireball + Zap to take out any pesky support troops if needed.

Punish them for using Elixir!

I can’t stress it enough, you must punish if you want to deal damage.

Punish them when they place Golem or Elixir Pump.

If you have already severely damaged one tower and your opponent places there Pump on the other side, then don’t bother Graveyard pushing on that tower just Fireball it.

Use Mega Minion and Musketeer for Golem and Bowler and Goblin Gang for support troops.

Because this deck doesn’t have Log, this ends up to be a very close matchup.

Use Goblin Gang to deal with the Barrel and Bowler for Knight + swarm push.

There Inferno Tower is a pain to deal with, so you can try to bait it out with a counter pushing Bowler or just place Graveyard a few tiles back to distract it.

Bowler is great at dealing with swarm cards, just don’t give rocket value to them, like tower + Bowler.
If you are able to avoid their Inferno Tower, it is an easy match up.

“If you deploy the Bowler immediately when the Goblin Barrel’s shadow hits the river, the Bowler can kill all 3 Goblins at once.” – Ash

Not very tough if you play it right but you are almost guaranteed to take damage.

Ideally when they pump up, you should place your Giant in the back and slow roll a Graveyard push, taking out their pump.

Bowler is able to take care of the two musketeers while Goblin Gang or Mega Minion can deal with other.

Because you don’t have any air targeting splash damage troops in this deck, be careful what you Fireball because Minion Horde could take down your whole push for a massive positive Elixir trade.

A hard makeup but once you get the hang of this deck you will be able to get the win easily.

This is a pretty diverse variety of matchups because it could be Mega P.E.K.K.A to Mega Balloon so this many how counter the Mega Knight.

Place Bowler in such a position that it is able to hit both the Mega Knight and the support troop.

Use Mega Minion or Musketeer to slowly chip away at him.

You can place Goblin Gang to defend against him shown as such:

Use Mega Minion or Musketeer for the tank and Goblin Gang or Bowler for Graveyard.

If they are running Poison, counter Graveyard with Bowler, then make an aggressive counter push because they will be low on Elixir.

It all depends on what Graveyard deck it is.

If it’s Graveyard cycle, then play your deck as a Giant Beatdown and then reveal Graveyard last second and try to get the win.

If it’s a Graveyard Beatdown and they are using a heavy tank like Golem, punish them when they place it down and defend from there.

Well that’s all! Thank you for reading and I urge you to give this deck a try, no matter how silly it looks!