Hey everyone! Duke here posting my first deck guide. This deck works well in all arenas because there are no Legendaries or epics that take time to level up. I have personally used this deck to get all the way up to 3700+ trophies from when I first started using it in Arena 6. 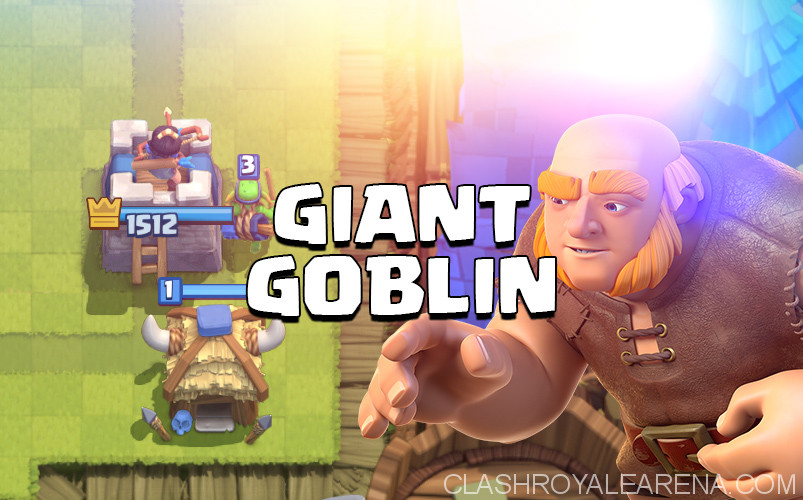 Try to start by placing the Goblin Hut directly in front of your King tower and establish lane control. This will be the lane to try and build your Giant push on. If not in rotation then you can start with Spear Goblins at the bridge for some chip damage.

The key defense is to have your Cannon and Goblin Hut set up like this: 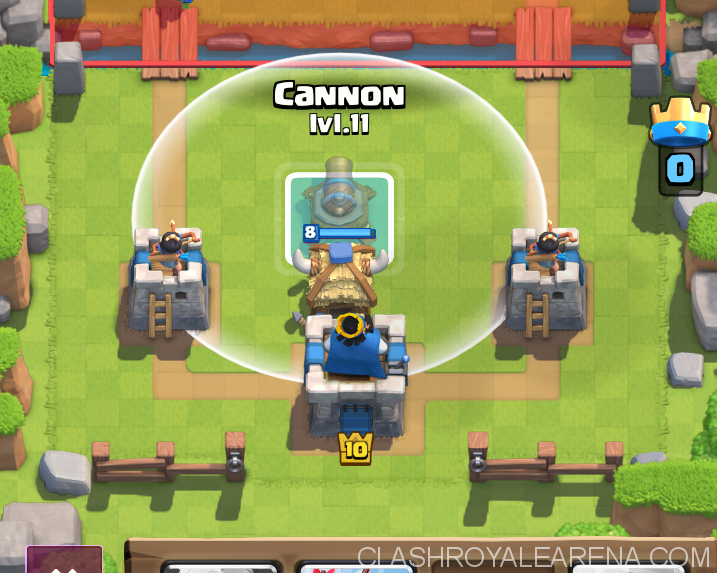 This setup takes out Hog Riders completely for a positive trade on the Cannon. It draws tanks (Giant, P.E.K.K.A, Golem etc) into the center and then the Valkyrie is used to take out support troops at the bridge.

For Lava Hounds, place the cannon two tiles to the center of the Arena Tower to aggro the Hound: 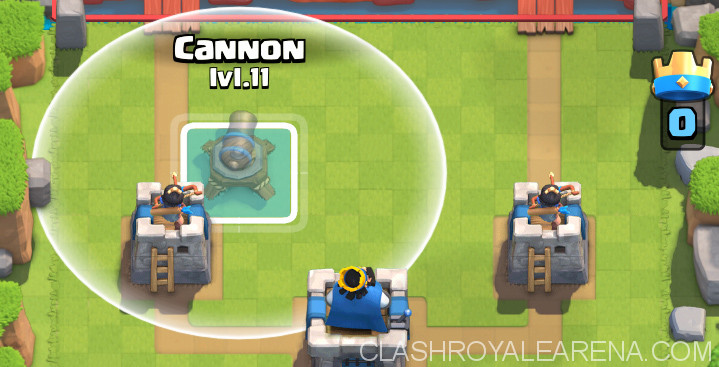 This placement also is in range of any Miner placement on the Arena Tower for dealing with the Miner + Lava Pups strategy. The Musketeer is used to shoot down the Lava Hound but placed on the wall side of the Arena Tower out of Fireball range with the Cannon. I usually try to surround Miners with Spear Goblins and that only gives the Miner about 2 hits onto your tower. The Valkyrie is also a good counter to the Miner.

The main push in this deck is the Giant + Musketeer push. Arrows and Fireball are used against cards like Minion Horde, Buildings, Barbarians, etc. When up on Elixir, place the Valkyrie in front of the Giant for an extra strong push.

Try and get two Goblin Huts down, placing the other in the corner either in the same lane or the opposite lane. Avoid doing this if your first Goblin Hut is about to die because the Cannon on top of the Hut defensive setup is more important than just getting another Goblin Hut down.

If you place a Giant in the back you can usually cycle back to another Giant by the time it reaches the bridge for a double Giant push.

Valkyrie: Main defensive troop of the deck. I recommend placing her behind enemy tanks to take out all of the supporting troops. Combined with Spear Goblins she can aggro Elite Barbarians to the center and take them out. Valkyrie + well timed Cannon can eliminate all but one or two hits from the Royal Giant. The Valkyrie when placed on the middle tile directly in front of the Arena Tower will take out the front two Goblins from a centered Goblin Barrel 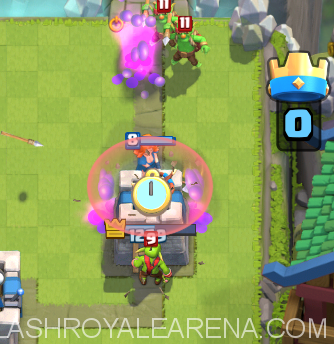 Giant: Used in emergencies as an Elite Barbarian sponge. I will place him at the bridge a lot so that more Spear Goblins  can stay behind him as opposed to running in front.

Fireball: There are many interactions with Fireball that can make or break a battle. For Musketeer and Wizard, a one level higher Fireball will take them out completely resulting in an even or positive trade plus potentially tower damage if they place it in the back. Level 9 Barbarians will fall to a level 9 Fireball (I’ve only done this once). For the Witch, two steps above standard is the magic number meaning that a level 4 Witch will die to a level 9 Fireball. To read more about the Fireball, please take a look at here.

Arrows: I will use Arrows on many cards including Princess, Minions (knowing my Fireball can take on Minion Horde), Minion Horde, Goblin Barrel, Lava Pups, Skeleton Army, Skeletons from the exploding Tombstone, one level lower Archers, and Three Musketeers (paired with Fireball), etc. Read more about Arrows at here.

Good luck with this deck and Happy Clashing!