Hey guys I am EmanSaur! I’ve been putting this guide off for many months as I’ve been trying to grind to the legendary arena using this deck only and finally I’ve made it, currently at a peak of 3250. After being fed up with the amount of Hog Rider and Wizard requests some time in the past, I created this deck to take advantage of requesting cards that no one else was using. Hopefully this will be helpful for you all! 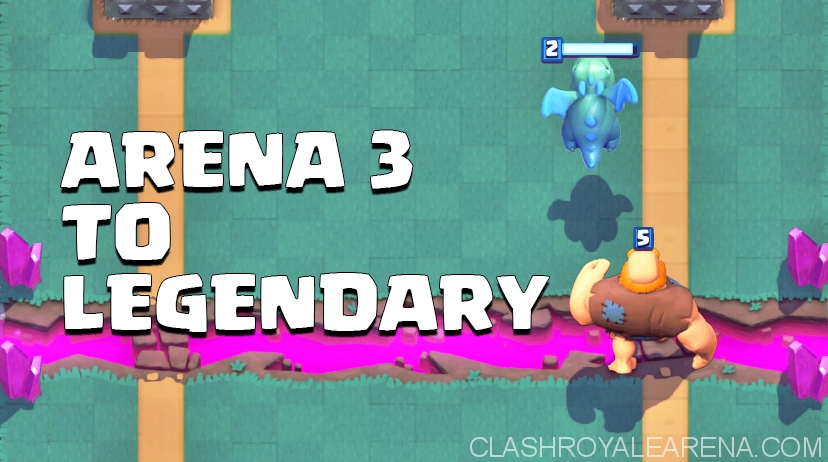 How I push from Arena 3 to Legendary!

Giant: The main tank. Always try to back this up with something (except barbarians), you will not go very far with a solo giant. Hard countered by inferno tower and minion horde, however these can be overcome by placing barbarians in the other lane (to draw inferno tower aggro) or using your variety of anti-airs to get rid of the minion horde.

Musketeer: The main damage dealer. In the level department, you will want to request these guys earlier than other troops in order to: 1. One-shot goblins/minions 2. Survive fireballs Place these behind any tank (giant/valkyrie/baby dragon) so that is able to get a substantial amount of damage off. Only play solo behind your tower to defend against a push where other cards are less effective (e.g. solo hogrider push).

Spear Goblins: Extremely versatile card. Putting these behind a tank can cause them to do an insane amount of damage for the amount of elixir they cost. Also use them to draw aggro towards the middle against strong single-target units such as the princes, pekkas and sparky.

Valkyrie: AoE clearer and tank. After she received her buffs she became more useful as she was able to take and dish out more damage which is worth more than the anti-air that the archers provided. You can use her to start a second push in another lane while the giant is pushing the first, making sure to also back her up with troops.

Bomber: AoE clear, the answer to all spawners (except furnace). I love this card, it allows you take out barbarians unharmed in conjunction with your tower. Amazing at pushing as well as it often clears out small things like goblins and skeletons that the opponent uses to counter the giant while also staying out of range itself.

Barbarians: The hog killer. NEVER use this card offensively. Use exclusively to defend against hogriders/princes/pekkas/giants as they are the only card that can easily defend against them and still have some sort of pushing power left over. If the opponent has none of the aforementioned cards, use these to take out the back lines of an enemies push, making to place on top of the troop as to make them split and avoid AoE.

Arrows: AoE clear, minion killer. Pretty much exclusively used to kill minion hordes and princesses which are always present, sometimes used to get a bit more damage off on barbarians or finish off a tower.

Baby Dragon: Flying AoE clear and semi-tank. Use this to clear anything spawner decks chuck at you, minion hordes as well if arrows are not available. While I do not recommend it, it can be used as another tank. Of all the cards I would swap out, it would probably be this one, but at the moment it is still doing well.

This deck was built as an all-rounder, able to defend against most, if not all, situations. The main gameplan is to put a giant down and back it up with troops (like you’ve always done since arena 1), while constantly using specific cards to defend (e.g. if they play a hogrider, ALWAYS use your barbarians strictly to defend against them). Ideally, you will have a giant in your opening hand, which will be played as soon as you hit 10 elixir to start your push. The only exception to this is if you are rushed immediately at the start with something like a hogrider, in which case you should defend first. If the giant is not available, usually a bomber or valkyrie will be available instead which can be played behind the king tower in order to cycle for your giant (which will then be played at the bridge). Due to the amount of options you have at any time, you should be able to easily defend your towers while also pushing with your giant.

Once a tower has been taken, you have two options: 1) Defend, defend, defend. Do the same thing as before, except instead of pushing with the giant, use him exclusively as a tank. This tactic works best against decks that use mortars or xbows as they will be unable to hit your tower due to his massive amount of hitpoints.

While this deck is generally good at any matchup, sometimes there will be games where you will just be straight up outleveled by a huge margin. In these games, DO NOT ATTEMPT TO WIN. Go for a draw and defend your towers (and trophies). It is much safer and good for your salt levels.

Conclusion: I must admit this deck guide is quite basic, however it should give you the general idea of how to play the deck and show that it is very possible to hit legendary arena with a deck that utilises mostly arena 1 cards. I hope that this guide was useful for you guys, see you in the arena!