Hey guys, it’s NebulaNoodle back with another guide! First of all, happy 2018 to everyone, and best wishes for the new year.

This deck may only be viable until the next update, as Royal Ghost is definitely getting a nerf. It is too OP (like Night Witch at first release, which Supercell nerfed the hell out of).

But nevertheless, this is classic Vietnam Bridge Spam with the new boy, the Ghost!

A side note: I had a major trophy push recently to 3.9k, so this guide is partly to celebrate my success! 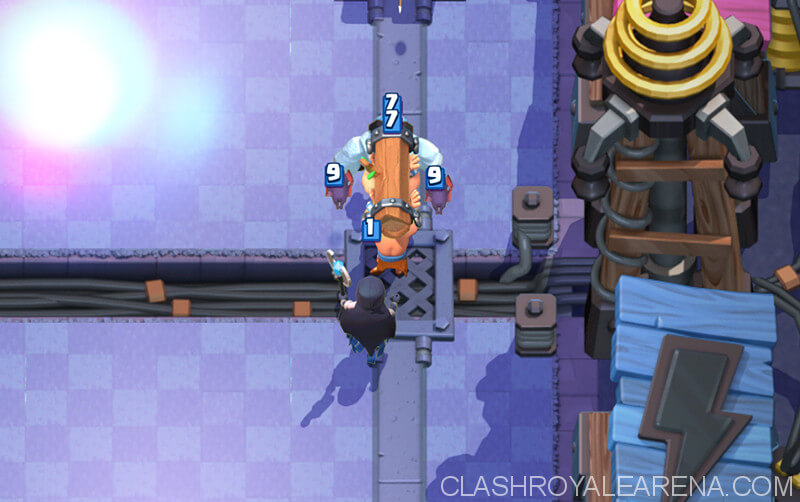 Ice Golem: The core of this deck.

He is your tank for everything behind, and because he can be pushed by the fast troops in this deck and is so cheap (2 elixir), he is so good in Bridge Spam decks.

Whenever you see a Golem/PEKKA/Pump/anything heavy and slow-paced played, put Ice Golem down and go crazy!

Supercell nerfed the Ram, but was still popular in 3M decks. Now it’s back and better than ever with the Ghost, and this 4 elixir card paired with Bandit or Ghost is an easy tower.

Place the Ram at the side, by the edge of the river, so the Ram charges right as it reaches the bridge and becomes even harder to stop! Keep making mini pushes (quick and devastating.)

The Newbie. WAYYYYY too OP. Just like NW at release.

He does splash damage, has invisibility until HE attacks (which is crazy offensive potential), is fast, and can kill every glass cannon in the game on the OPPONENT’s side, and goes back invisible after he finishes killing a troop and always gets a swing or two if not dealt with properly. Only for 3 elixir!

Everyone is using the Ghost on ladder. I like thinking of him as a troop in touchdown mode, because nothing can touch him until he attacks.

This way, he is really good at chip damage, similar to the Bandit. Because he is so cheap, he fits perfectly in Bridge Spam decks.

He can be used as a mini-tank as well (he is much better than the Knight for the same cost), because he can protect the Bandit/Ram/Night Witch from splash cards.

He basically replaces the Goblins/Ice Spirit in this deck.

Another special ability card. This gal has always been a staple in PEKKA/Bridge Spam decks, mainly in Control/Beatdown.

Her dashing ability is really valuable to scrape another 320+ damage off the tower, and placing her in the centre after taking one tower (and taking a tower is usually guaranteed in these decks) will often result in about 600 damage. Value!

She was nerfed to oblivion, and ended up only really fitting in Golem decks. But now Royal Ghost has come out, she is really good again.

Her spawned bats provide a lot of threat, and even though she isn’t as fast as the other cards in this deck, her bats can really stack up quickly and kill tanks pretty effectively.

She is more of the counterpush card in this deck.

Your main tank killer and other counter push card.

He provides lots of value if not distracted, to kill cards he hard counters, like PEKKA or Golem. Positive Elixir Trades!

Use the Poison to kill E-Wiz or distraction swarms when going against tank decks.

Even at half/minimal health, if you add Ghost/Ram/NW/Bandit, he can be used to melt down defensive troops, gaining even more elixir advantage.

Used on offense or defence. The Poison is used to gain elixir advantage against large clumps of ‘Fireballies’ or on offense.

It is incredibly crucial, when facing Graveyard decks, especially Giant/Golem Graveyard decks, that you know when to use Poison on offense and know if you can cycle back quickly enough to kill the poison, as this is your only reliable graveyard defence (Ghost’s splash radius is super tiny.)

Poison is probably one of the most important cards in this deck.

Zap, is of course used to reset Infernos. Just don’t be stupid with this card and you’re good.

This card has been explained so many times, that I think I don’t need to explain much more!

You really can’t replace much in this deck.

Lots of the cards have special abilities that can’t be replaced, and the deck wouldn’t be as good without them.

If you don’t have Zap in hand you’re pretty screwed.

And if they have something to kill the Inferno Dragon- RIP.

There are so many ground squishy troops, that Sparky can easily wreck everything and you may not have elixir in hand to defend the counter push.

PEKKA dishes out high damage and has high HP, so the PEKKA can easily kill everything in two shots.

And PEKKA decks usually have E-Wiz so again they can kill your Inferno Dragon easily before it kills the PEKKA.

This Deck Does Well Against:

WHENEVER you see the pump/Golem/Giant played, don’t worry about your elixir.

Whatever you have, just spam it on the bridge.

Ghost, Bandit, Ram, the works. Even try to go for the three crown!

It’s better not to use Poison here as you may need to save it against the Golem push.

It’s really easy to overwhelm them, as Hog Cycle decks often don’t have strong high damage/high DPS cards- most of the cards are squishy, and even Mini PEKKA can’t take out everything singlehandedly.

Neither can Inferno Tower/Cannon/Tesla. Plus this deck cycles so fast you will always have a Hog counter in hand. Hog users have no chance! Because Hog Rocket decks are decreasing in popularity you don’t need to worry about the opponent rocketing your push.