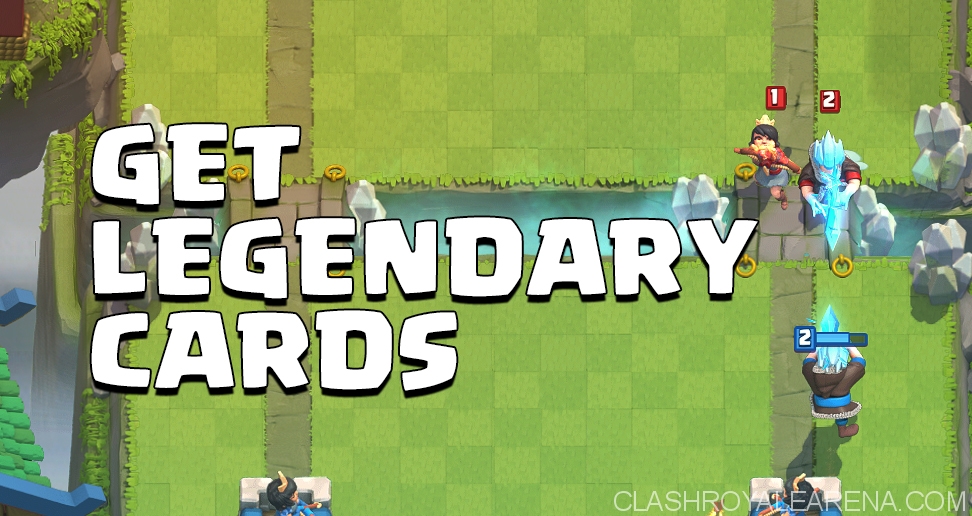 How to get Clash Royale Legendary Cards

So the question everyone keeps asking is, how do I get Legendary cards? Well there are three main ways:

Also, make sure you’re opening your Free Chest and Crown Chests every day, because they can give you gems. You can make anywhere from 14 to 28 gems every day if you always open your Free Chests and Crown Chests on time. Then use those gems to buy gold and save that gold for a legendary card once you get to Arena 9 and find the one you want in the shop, because that’s the best value you’re going to get with your Gold.

What are the best Legendary Cards?

Now you may wondering what the best Legendary cards are. Well every Legendary is in my opinion very good and grants you a lot more value than its cost. But I’ll give you guys my personal rankings of the legendary cards.

#2 is the Ice Wizard – The Ice Wizard is still the best Legendary on defense and offense. He doesn’t really do much damage, but his specialty is splash damage and the ability to slow down troops. And that ability is pretty insane in my opinion because that allows you to form powerful defense against some of the biggest threats in the game. He basically lessens the impact sustained by your Arena Towers, which in return allows you to form much more powerful counter pushes. I’ve seen some crazy achievements done with the Ice Wizard. For example, not too long ago a level 6 player made it to Legendary Arena with an Ice Wizard. While the current highest level 8 player in the world had surpassed 3800 trophies by using the Ice Wizard in his deck. So yea, incredible potential and versatility of this card while only costing 3 Elixir (which is 2 less than the normal Wizard), makes the Ice Wizard one of the best Legendary Cards.

#1 is the Princess – She is still very good in my opinion because of her incredible range, ability to do area damage, sometimes bait your opponent into using their Arrows, ability to defend from the other lane, ability to securely shoot down defensive buildings from your side of the map, ability to securely separate herself from your other troops that may be also weak to Arrows. There are just so many things she can do and can fit in almost any deck and only cost 3 Elixir, and so in my opinion she’s by far the best Legendary card.

#3 is Lumberjack. (or he should be #2?). Lumberjack is now seriously super useful. He can easily deal with lots of ground troops in tons of situations. With the insane DPS, he can take down a tank quickly and deal at least 1000 damage to the unprotected building. When coupled with Lava Hound, Giant, Hog Rider, Witch… Regardless of the damage he can deal by himself, the insane boost from the Rage Spell could be the game changing factor. Due to his very fast movement speed, sometimes the opponents get panic and don’t find the proper ways to deal with him.

#4 would have to be Sparky – Many people think Sparky is OP, and others believe that he’s not that hard to counter. But Sparky is definitely a card puts many players in a lot of pressure, especially when combined with a splash attacker like the Wizard or Ice Wizard or Princess, he becomes very annoying to deal with. He’s definitely a card that can help you move up in Arena 7 very quickly.

#4 is the Miner – I have the Miner ranked last just because i find that the other Legendaries just provide you with so much more potential for gaining trophies fast. This of course does not mean the Miner is a bad card, no he’s a Legendary for a reason. He only costs 3 Elixir and is basically a much better Knight with his ability to target a troop or building anywhere on the map. So he has a lot of potential both offensively and defensively. But if I had to choose between Princess or Miner, I would without a doubt go with the Princess.

#5 is the Lava Hound – The Lava Hound is a very powerful Legendary card when used properly in a proper deck. You guys can check my Lava Hound deck that I shared in a video a few days ago. That deck is definitely one of the decks that I’ve had a lot of consistent wins. However, the reason I have the Lava Hound ranked this low is because he’s expensive and unlike the Princess or Ice Wizard, the Lava Hound is not a versatile card, which means that you simply can’t use it in every deck. It requires a proper niche and a deck built around it. Not only that, it does poor damage, while becoming a big defensive liability against powerful ground troops like the Prince as your 7 Elixir Lava Hound will simply ignore the Prince as he charges onto your tower. And it takes a while for the Lava Hound to pop into Lava Pups.