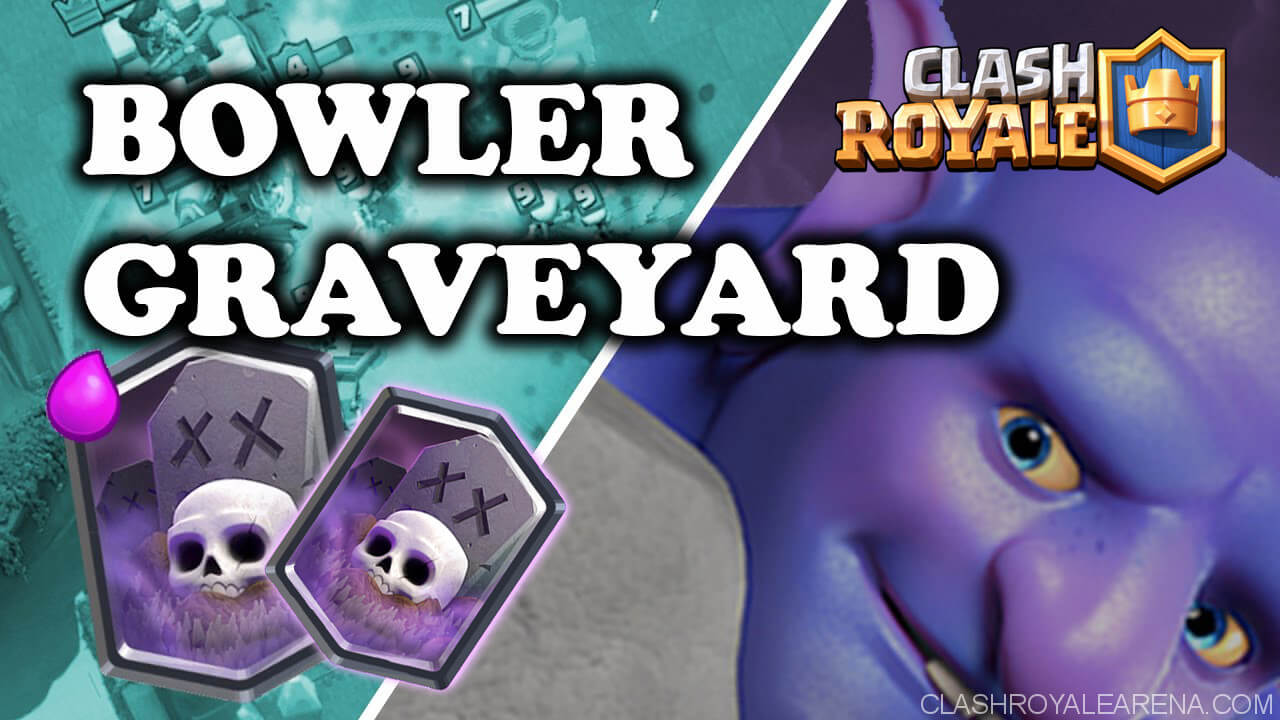 Hi guys! StarZeus here with deck guide for all for you. I already used this deck since I was still at Frozen Peak, but still effective ’til now along with the new meta today. Now I am going to show to you how to use my deck.

Golem: This card is the tankiest of all tanks out there. This is one of your main win condition in the battle, with the cost of 8 elixir, durable, decent damage, Death game, and as well as extra golemites, making worth to spend for a push!

Bowler: This blue-dude right here can effectively shutdown GROUND pushes, making it as perfect decision countering Pekka pushes, this can’t be good synergy with the golem since it is expensive 5 elixir card for you to have a golem graveyard combo.

Graveyard: Your main/secondary win condition on this deck, sometimes the MVP, but if there are so many counters on your opponent would turn it to be useless. I actually use this sometimes for defending or distracting troops if I don’t really have any other options on defending a specific troop, just use it sometimes (on defending/distracting) or else your winning chance will decrease

Electro Wizard: Stuns Inferno Tower, and Inferno dragon, resets charges like Prince, Dark Prince, Sparky, Bandit, and a decent damage making this guy so fit to go in every deck that’s why you always see him in every battle, but unfortunately Mega knight won’t affect it’s dash when zapped unlike the bandit.

Mega Minion: I like how this card was in the game Low elixir card, High damage, decent health points, and average speed. This card would sometimes take very high damage if left alone.

Tombstone: Spawns skeletons continuously in a short period of time, this makes easy to distract cards as it spawns 4 extra skeletons when it’s destroyed by any troop/s or spell/s. Just as the mega minion, I like how this card was in the game.

Zap: zaps goblins (should be 1 level higher), and also minion horde (should be 2 levels higher), well nothing much more to say ’bout this.

Arrows: A 3-elixir card which does a lot of functions, It kills Minion horde with a +3 elixir trade, minions, princess, goblin barrels, goblin gang. Try to use its whole radius, and timing, This will help you in many ways.

Early Game (3:00-2:00):
In this part of the game, you should know what every card and combos your opponent has. Defending is the best option for this time, DO NOT use golem, or else you will be punished.

Think of your opponent’s weaknesses, so in the end game, you could already master how you will play against your opponent, keep in mind don’t make negative trades since you don’t have pumps for you to catch up that easily. Taking damage to your opponent’s tower would be great starting health, make it as low as possible. If it’s already too low, don’t be too much confident about winning already.

Mid-Game (2:00-1:00):
The same tactics with the Beginning, Defend and defend but be more aggressive!

So just assume that you already mastered the opponent’s cards and combos, now since you should be more aggressive this time you should do some basic pushes like Bowler + Graveyard, Ewiz + Graveyard, Mega Minion + Graveyard, Bowler + Ewiz,   BUT BE CAREFUL! Take first a look on your elixir bar, would it be enough for you to defend after? Since that would be the case, do counterpushes for you to save more elixir, but if you really want to do a push, put first an Allowance before you do a push for example, Mega minion + Graveyard, that would be total of 8-elixir push, that doesn’t mean that if you already have the exact amount of elixir, you will do it right away, you should wait for 1 or 2 more elixirs to fill in the bar before you are going to push, also consider your spells (zap and arrows) that will kill the counters of your push.

End Game (1:00-0:00):
Around this time be more aggressive as possible, start using Golem frequently then pair it with a graveyard or Mega minion, or you could pair both of them with the golem, Using cheap support like mega minion will make your push cheaper and more effective in the End Game.

If you almost destroyed the tower, like it is already below 200 and below health, don’t be too confident, “confidence might kill the cat”, but if you already destroyed the first tower, pressure on the other lane for the opponent will defend and defend until he/she won’t have enough elixir to destroy your tower.

Unfortunately, meta Golem-decks won’t really work against this deck unless the player doesn’t master the deck, BUT (there is always a but) I’ve been beaten some off-meta golem decks

So lets say you’re against with Golem EB deck which can be seen now rarely in the arena, Use bowler to defend those cancerous Eb’s, separate golem using tombstone (as far as possible) along with mega minion on the Elite Barbarians, counterpush after, if you don’t have enough elixir to put golem, just put graveyard to damage the tower, but if you troop’s health is not enough to tank your graveyard then let it go either.

Most of the time, golem decks always carry Lightning, so be careful on your troop placements, make it far enough and safe from its support to kill it. As well as pump, since this deck doesn’t have average or high damaging spell, I use graveyard along with Bowler/Mega minion to counter it be patient do not directly do the combo, put the MM/Bowler at the side of the tower then wait for it to get into the bridge, then put the graveyard, and then HUWALAA!

PEKKA is now mostly seen in every battle. I’ve been beating PEKKA decks also with this one, use the tombstone or Graveyard (if no option/s to defend it) to distract the PEKKA, kill the miner with Mega minion.

I really like it when I am matched up with siege users.

Use Bowler to kill the Xbow/Mortar, like put it Directly in front of it, if the opponent put a supported use Ewiz or Mega minion to support the bowler. If your bowler is out cycle use Golem for counterpush, or tombstone for cheaper defense then cycle for the bowler.

Just keep in mind that do not OVERCOMMIT or else you will have negative trades, just control and relax.

We’ve all know that most miner users always carry poison, in that case, you’re unsafe if you use Ewiz to counter since the poison will kill it. Therefore you need to use Mega minion on it.

Some miner-based decks don’t have enough counters for your graveyard so that this one would work against them.

This deck might be hard for you if you got the wrong move, Be wise!

Elixir Management is the best here, Ewiz on the Goblin Barrel, and zap on Knight + Goblin gang combo, save the arrow for you Bowler/Golem + Graveyard push, use troops to kill the princess, or arrows if you have no choice already. Do not give rocket values on your opponent, so don’t put troops near the tower or gather all of them in one place.

This one can be hard if not handled seriously, now your choices on defending on this cancerous hog are to use tombstone or Ewiz. 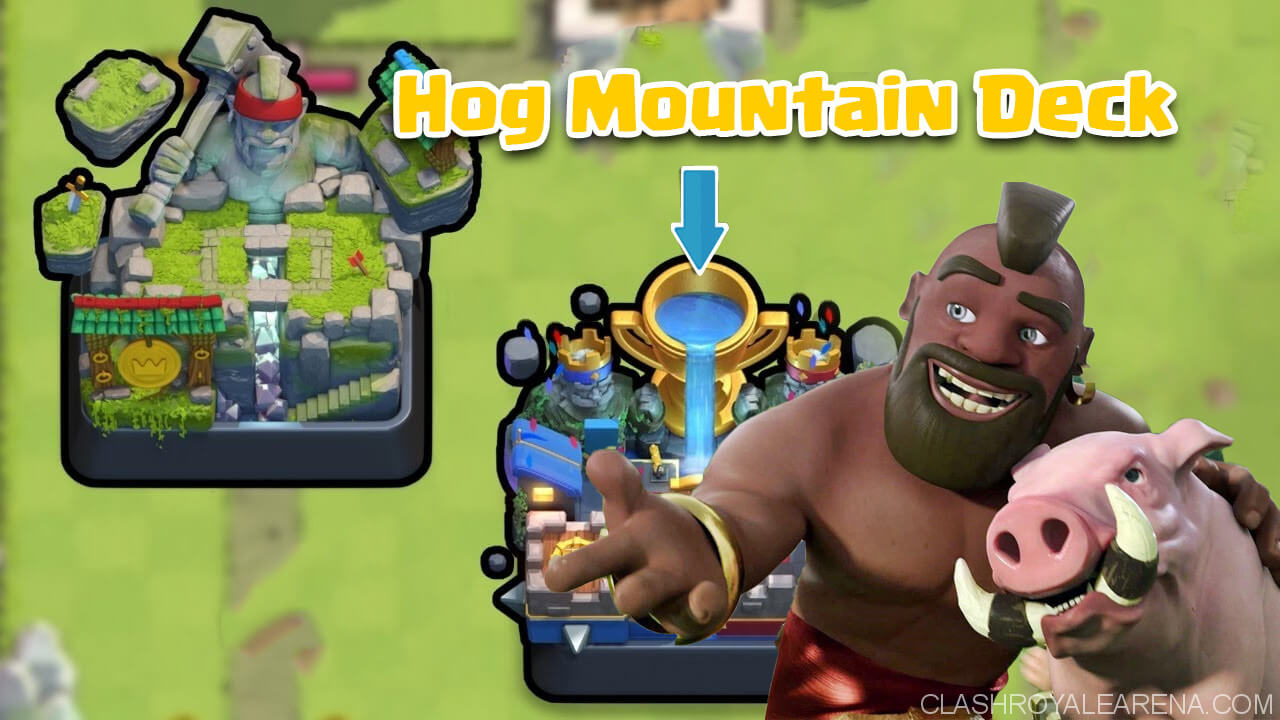 When you use tombstone, make sure that you will put it right in front of the tower with 1 tile gap between on the tower or else you will have one hit from the hog. TAKE NOTE! It’s guaranteed that the hog will leave no hit to the tower, but just make sure your tombstone has the same level with the hog (e.g., Level7 hog –> Level7 tombstone). Be aware that hog along with support/spell will not be defended by tombstone alone, if the opponent uses poison, change the placement so the tower will do more damage along with skeletons before it goes to your princess tower.

When using Ewiz on defense against this will just leave 1-3 shots on your tower, make sure hit its spawn zap on the hog, same as the tombstone, beware of the supports/spells, don’t just always hit the hog with its spawn zap put him farther from the hog (keep it away from the poison/s).

How about the other cards? Well, Bowler and Mega minion ain’t that much effect on defending the hog, BUT complementing with cards when defending hog. Bowler does have that pushback effect, but with a 5-elixir card? (if you don’t have any choice then go for it) also, think its hits speed, 2.5secs will take too long for him to finish the hog, as well as a Mega minion, he has high damage, but with an average hit speed of 1sec, will make you feel not enough to use him to counter the hog.

So that’s all guys! Hope you’ll learn something new using this deck. 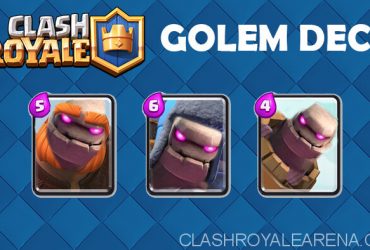 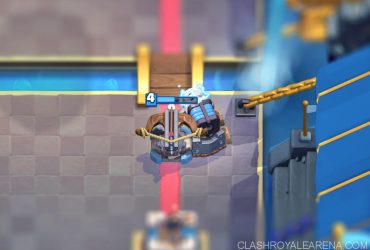 Hey guys, it’s RohanReigns back at it again after a long time with another guide for you all, this time sharing an amazing X-Bow deck that I use to rock …