With the recent influx of legendary cards out there, I’ve been playing with something that’s a bit out of my element, but still enough in my element to work. Since arena 4, I’ve ran a spawner deck with huts, but wanted to try something that could get some use out of Ice Wizard. The deck has been very consistent so far, giving me double Valk coverage on my backside counters, or giving me double Furnace to protect both lanes while I build a counter push on another, and finishing up with double Hog/Ice Spirit to usually drop one to two towers in no time. Since I’ve built it, Ice Wizard has played a usually small role, some games I don’t even play him. But here’s the breakdown of the deck. 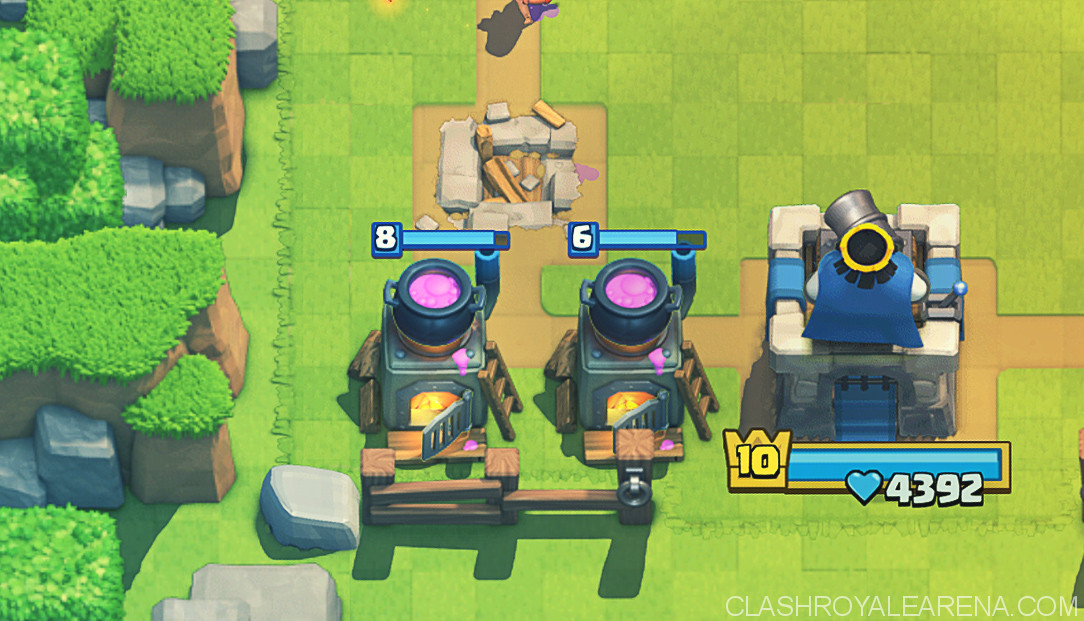 Furnace:  First line of defense. I do whatever I can to have my first legit play of a match dropping a Furnace, and I always tuck it into the corner behind the Towers and next to the King, just in case a Fireball, Poison, Zap, Miner or Rocket activates the King’s tower. Fire Spirits come out fast enough to limit a Valkyrie to only a hit or two on a tower just by themselves, can make a big dent in a huge swarm of Larrys, and also help to control Prince charges.

Mirror:  The silent winner in this deck. SOOOOOOO versatile. Games when a Giant is dropped after my initial Furnace on the undefended lane, I’ll drop a Mirrored Furnace there. During a heavy push, I’ll split two Valks between the two parts to help reduce amount of damage to either one. Against Lava hound/Baby Dragon/Inferno Dragon/Minion Horde, I’ll double up on Musketeers to help limit the push. Against Sparky, I drop the Ice Spirit behind tower followed by my initial Valkyrie, then a second if it dies. Later on in the battle, or if my counter didn’t have to be a big counter, I’ll double up on Hogs and attack at a tower. I’ve also been using Mirror a lot to counter Inferno Tower, which eats Hog Riders up until you get the first tower dropped.

Hog Rider: Your main kill. The deck is less themed as a Trifecta as very seldom do I push with all 3 on a tower. Typically, I fake the Trifecta push on one side to get the other player to scramble defending so they’re Elixir is depleted and they’re less able to pull a counter to double Hog on the opposite lane. After one tower is dropped, double Hog is insane, having a pocket push spot to bank in and drop the second tower.

Valkyrie:  Hands down, this card has become one of my favorite cards in the game. Deals a lot of damage, can help tank in a counter push, handles swarms from the ground and can draw attacks from flyers if you just need a little more elixir to counter or you had to cycle a card out to get to something else. Very versatile, and next to Hog Rider, it’s my second favorite card to mirror in this deck.

Ice Wizard: The main inspiration of this deck. With all the new chests, this was the one legendary card I wanted to get. He was the initial inspiration behind building this deck, which is now at like version 9 or so, but I wanted something that he could work in. He’s great at slowing pushes down to protect your used Elixir. He’s a great draw to a Miner or a Fireball, which could allow something else to be used. He’s more of an intimidation tactic than anything in most cases. I’ve had some games where I haven’t had to use him, but I’ve also had some where I had to call a defense good on one side and Mirror him on the other to protect against that push. Another very versatile card.

Fire Spirits: In my opinion, one of the best cards in the game. They really don’t need much explanation. 3 elixir advantage against Minion Horde and Barbarians. Get 3 Musketeers locked on something and they can take them down pretty quick, especially if you pair with Valk. Plus, it’s an early match cycle to get your hand how you want it.

Ice Spirit: Another amazing card that I’m having a lot of fun with. Low cost cycler card, drop with a double Hog push and it can help you get an extra 4 or 6 hits in between two Hogs. Defensive uses are mostly against Sparky, good to get him in defense range of the Towers, drop a Valk to pull Sparky’s charge then Freeze him before his next charge. Can stop a Valk and prevent her from getting hits on a defense wall, or can help defend against a swarm of troops on a Tower.

All in all, this deck has been very solid for me. 3 elixir average cost, which keeps pressure on very tight on both offense and defense. Solid answers to every real card combo I’ve ran into. My nick in game is Frag, I’m a co-leader in a clan called Florida Rises, a start up from a family of clans from Clash of Clans. This deck has been performing good in challenges, tournaments, and in the regular arena, I’ve been upper arena 8 for a little bit now and this one is helping me push a little further. Thanks for considering it, and thanks for the resources available on the site! They’ve been really helpful!